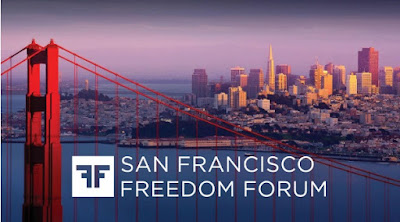 Tonight the San Francisco Freedom Forum commenced with an opening reception at 7:30pm sponsored by Humanity United. Tomorrow, September 29, 2016 will feature a full day of presentations beginning at 9:30am and the agenda is available online.


Cuban pro-democracy activist Rosa María Payá will be speaking during the first session at 9:45am. Below is the description of the young activist prepared by the Oslo Freedom Forum:


Rosa María Payá, daughter of the deceased democracy activist Oswaldo Payá, is one of Cuba’s most vocal political dissidents. Payá serves as the president of the Latin American Network of Youth for Democracy, and is a member of the Cuba Decides campaign. In April 2014, Payá was detained in Panama before the Summit of the Americas in what has been criticized as a move of political intimidation. Since her father’s passing in a mysterious car accident in 2012, Payá has repeatedly called for a formal investigation into his death. She speaks around the world on his behalf and addressed a public letter to President Obama after the 2014 U.S. policy shift toward Cuba.

In May of 2016 she spoke at the Oslo Freedom Forum about her martyred father Cuban democracy leader Oswaldo Payá Sardiñas who died under suspicious circumstances on July 22, 2012.

For more information or to purchase your tickets using PayPal or Bitcoin, please contact them at info@oslofreedomforum.com or +1 (212) 246-8486.