Former president of Mexico Felipe Calderón banned from entering Cuba by the Castro dictatorship's immigration authorities announced the news in a series of tweets on February 21, 2017. First that "I am also invited to the anniversary of the death of Oswaldo Payá. I ask the Cuban government to rectify this absurdity and allow us to remember it. In a later tweet embedded below cited AeroMexico: "We are informed by Immigration of Cuba that FCH passenger is not authorized to enter Cuba and requests that he not be documented in flight AM451."


This is the first time that a former Mexican President has been denied entry to Cuba reports journalist Joaquín López-Dóriga.  Other high ranking officials from Latin America have also beeen barred from entering Cuba. Last night, February 20, 2017 at 9:15pm, Mariana Aylwin, daughter of the former Chilean president Patricio Aylwin tweeted "I can not embark to Cuba because of a ban issued by immigration from Cuba." A short while later Rosa María Payá posted the document prohibiting Mariana from traveling to Cuba by order of the Castro dictatorship's immigration department.

Rosa María Payá Acevedo returned to Cuba on February 15, 2017 to receive Luis Almagro, the Secretary General of the Organization of American States at her home a week later on February 22, 2017 at 11:00am in Havana, Cuba.  The purpose of the encounter is the presentation of the annual Oswaldo Payá Liberty and Life Prize to Luis Almagro also present at the ceremony will be Mariana Aylwin, daughter of the former Chilean president Patricio Aylwin who will receive the posthumous award on behalf of her late father. Patricio Aylwin was the president who oversaw the democratic transition in Chile following General Pinochet's military rule and passed away on April 19, 2016.

Unfortunately the repressive nature of the regime was already on display with Julio Álvarez and Félix Fara two promoters of the Cuba Decide initiative, a campaign for a plebiscite led by Rosa María Payá Acevedo, were taken and have been under arrest since February 18, 2017 at 11:00am.

In addition communication has become much more difficult with the telephones out of service and all matter of obstacles to prevent that the information surrounding this event be made known inside Cuba. Despite this there is optimism that the word has gotten out and that civil society will be well represented on Wednesday.


What can you do?
First sign a petition supporting this event and secondly let others know what is happening and encourage them to follow Rosa Maria over twitter, demand the release of Julio and Félix, the restoration of communications, and keep an eye out between now and February 22nd and follow the awards ceremony in real time. This event is being hosted by Cuba Decide and the Latin American Youth Network for Democracy.


The Castro dictatorship shows no indication of opening up and the denial of entry to President Patricio Aylwin's daughter is an outrage. Will it be repeated with OAS Secretary General Luis Almagro? We must be vigilant and hold the regime accountable for what it does next. 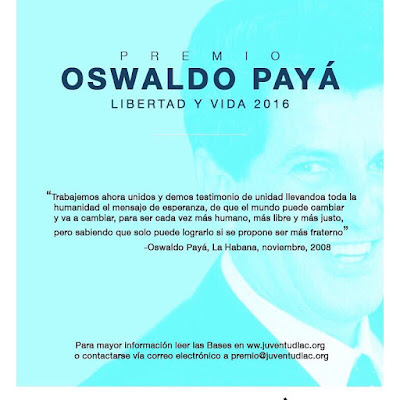