"Longevity has its place. But I'm not concerned about that now. I just want to do God's will. And He's allowed me to go up to the mountain. And I've looked over. And I've seen the promised land. I may not get there with you. But I want you to know tonight, that we, as a people will get to the promised land." - Martin Luther King Jr. April 3, 1968 Memphis, Tennessee 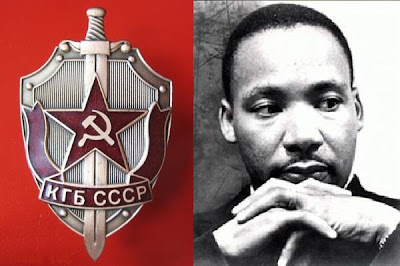 In 1992 a high ranking Russian intelligence officer defected to the United Kingdom and brought with him notes and transcripts compiled over the previous thirty years as he moved entire foreign intelligence archives to a new headquarters just outside of Moscow.

The Russian intelligence officer’s name was Vasili Mitrokhin and the information he gathered became known as The Mitrokhin Archive.

In the groundbreaking book, The Sword and the The Shield: The Mitrokhin Archive and the Secret History of the KGB by Christopher Andrew and Vasili Mitrokhin published in 1999 details were obtained from The Mitrokhin Archive on Soviet efforts to replace Martin Luther King Jr. with a “more radical and malleable leader” such as Stokeley Carmichael to provoke a race war in the United States.

“In August 1967 the Centre approved an operational plan by the deputy head of Service A, Yuri Modin, former controller of the Magnificent Five, to discredit King and his chief lieutenants by placing articles in the African press, which could then be reprinted in American newspapers, portraying King as an “Uncle Tom” who was secretly receiving government subsidies to tame the civil rights movement and prevent it threatening the Johnson administration. While leading freedom marches under the admiring glare of worldwide television, King was allegedly in close touch with the President. 83 The same operational plan also contained a series of active measures designed to discredit US policy “on the negro.” The Centre authorized Modin:

Service A sought to exploit the violent images of the long, hot summers which began in August 1965 which race riots in Watts, the black Los Angeles ghetto, which resulted in thirty-six deaths, left 1,0332 injured and caused damage estimated at over 40 million dollars. The Centre seems to have hoped that as violence intensified King would be swept aside by black radicals such as Stokeley Carmichael, who told a meeting of Third World revolutionaries in Cuba in the summer of 1967, “We have a common enemy. Our struggle is to overthrow this system . . . We are moving into open guerilla warfare in the United States.” Traveling on to North Vietnam, Carmichael declared in Hanoi, “We are not reformists…We are revolutionaries. We want to change the American system.”85

King’s assassination on April 4, 1968 was quickly followed by the violence and rioting which the KGB had earlier blamed King for trying to prevent. Within a week riots erupted in over a hundred cities, forty-six people had been killed, 3,500 injured and 20,000 arrested. To “Deke” DeLoach, it seemed that, “The nation was teetering on the brink of anarchy.”86 Henceforth, instead of dismissing King as an Uncle Tom, Service A portrayed him as a martyr of the black liberation movement and spread conspiracy theories alleging that his murder had been planned by white racists with the connivance of the authorities. 87

University of Cambridge professor Christopher Andrew, who coauthored The Sword and the Shield with Vasili Mitrokhin was interviewed by Charlie Rose on PBS on September 28, 1999 about the book and towards the end of the interview discussed how the Soviets celebrated when Martin Luther King Jr. was assassinated by James Earl Ray. Other Soviet archives documented efforts by the Soviet Union to stimulate and activate the Black Panthers in their struggle against the United States government.

Vasili Mitrokhin died of pneumonia January 23, 2004 according to the British government.
Posted by John Suarez at 7:11 AM