In solidarity with free Venezuelans.

This morning in Washington, DC joined with Free Venezuelans in a protest next to the White House in support of Juan Guaidó, the interim president of Venezuela, and to explain the current situation in the country. Speakers called for three steps to normalization: 1) end Maduro's usurpation of the country, 2) a transition government, and 3) free and fair elections.

I carried a poster with the images Geraldine Moreno and Génesis Carmona, two Venezuelan martyrs killed in February 2014. They were murdered by Maduro's security forces, trained by Castro's intelligence services.

Génesis Carmona, a local beauty queen, was just 22 years old and nonviolently expressing her desire for a better Venezuela when she was shot in the head on February 18, 2014 and died a day later.

Geraldine Moreno was shot in the head with buckshot on February 19, 2014 in Tazajal, located in Naguanagua, in the state of Carabobo while taking part in a protest and in one of her last tweets on February 17th explained what motivated her to take part in the demonstrations: "No one sends me I go because I want to defend my Venezuela." She died from her injuries on Saturday, February 22, 2014. She was 23 years old. 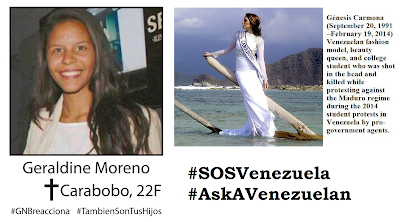 Sadly, there have been many other young Venezuelans murdered at the hands of Maduro's security services and it is still happening.


MT @ElChinoTzu Venezuelans in Washington DC protest against the group of socialist gringos who hide behind the slogan HandsOffVenezuela and pretend to speak on our behalf. We made it very clear that Venezuela wants FREEDOM pic.twitter.com/lpImD0gUr4 #CubaHandsOffVenezuela
— John Suarez ن (@johnjsuarez) March 16, 2019


We also peacefully faced off with supporters of the Maduro dictatorship, who had been organized by the Answer Coalition, that included violent communist revolutionaries.

During the pro-Maduro demonstration U.S.Hands Off Venezuela, a Chavista from the Answer Coalition attacked a Venezuelan who was filming in the area.  Some Venezuelan activists were surprised by the violence. They shoudn't have been. One of the organizing groups of the pro-Maduro protest is the Workers World Party (WWP), a revolutionary Marxist–Leninist political party that by definition believes in violent proletarian revolution.


Despite repeated provocations we maintained our non-violent discipline, and carried out the objectives of the protest.

We protested for a free Venezuela, supported President Juan Guaidó, called for Cuba Hands Off Venezuela, for humanitarian aide to be allowed in, and for Maduro and his criminal lackeys to be out of power.


Venezuelan protesters made it clear that the goal of the democratic opposition is the completion of a democratic transition with free and fair elections that restores the rule of law and freedom for Venezuelan citizens.This means that millions of Venezuelan exiles will be able to return home, and all political prisoners will be freed.

Venezuelan activists also called on those who wanted to know more about what is transpiring in Venezuela to ask a Venezuelan.

Organizers also explained that the humanitarian crisis in the country remains grave, and the refusal of the Maduro regime to allow humanitarian assistance into Venezuela is aggravating already existing famine conditions in the Venezuelan populace. 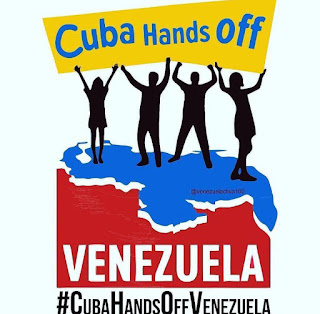 Another important theme repeatedly heard throughout the day was "Cuba Hands Off Venezuela!"

This SOS Venezuela protest in Washington DC was but one of many that took place around the world today in more than 200 cities and in Venezuela itself with hundreds of thousands participating. 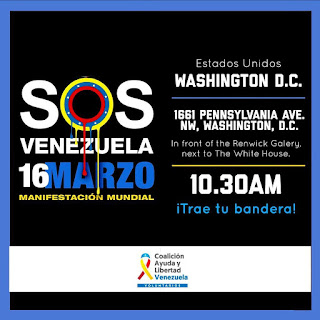