Truth Matters: When Fidel Castro asked and got the United States to place an embargo on Fulgencio Batista

Castro regime officials and agents have been active on social media on the 60th anniversary of the dictatorship and observing historical dates. Yesterday, March 10th was the anniversary of the coup led by Fulgencio Batista that ended Cuban democracy in 1952.

However, although they claim truth matters, important facts of have been left out or falsehoods repeated. Nevertheless, because the truth does matter and we too have memory, a few facts will be set straight.

First, the United States did not back the coup against Carlos Prio in 1952, and diplomatic communications following Batista's take over indicate this. In a Memorandum of Conversation, by the Ambassador in Cuba (Beaulac) with Dr. Miguel Angel de la Campa, Minister of State datelined Habana, March 22, 1952 and marked secret The American Ambassador indicated that according to Dr. Campa:


“ Cuba intended to restore normal relations with countries toward which the former Cuban Government had had an attitude of hostility. He mentioned Spain and the Dominican Republic in particular. He said he thought the United States should recognize promptly; that it was in our interest that the situation should develop in an orderly way. I reminded Dr. Campa that our Government had not been consulted about the coup d'etat and that Cuba could not expect automatic recognition from us.”

State Department had concerns about Batista's previous flirtations with communists in the 1940s, but recognized that he had control of the country following the coup, and that delaying recognition any further would damage relations with Cuba. The coup had taken place on March 10th and recognition was granted by President Truman, seventeen days later, on March 27, 1952. (By comparison Fidel Castro's revolutionary regime was recognized six days after Batista fled on January 7, 1959). 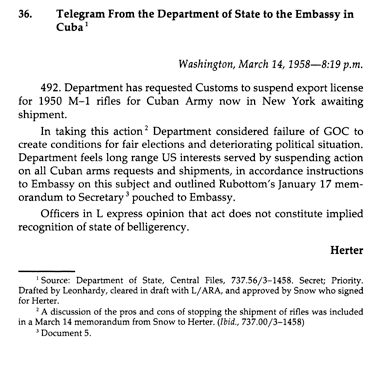 Secondly, the United States did back Fidel Castro and undermined the rule of Fulgencio Batista.
In January of 1958 the United States was pressuring Batista to restore Constitutional guarantees in exchange for the sale of arms.

On March 14, 1958 the State Department in a telegram to the U.S. Embassy in Cuba  requested that the export license for 1,950 M-1 rifles for the Cuban Army awaiting shipment be suspended. This was done because State felt that the Cuban government had failed to "create conditions for fair elections."


On the same day the Cuban Government presented to the U.S. Embassy in Havana a formal note protesting the delay in the shipment of M-1 rifles to the Cuban Army, and warned that it would weaken  the Cuban government and lead to its possible downfall.
On March 26, 1958 in another telegram from the State Department to the U.S. Embassy in Havana the view was expressed how the arms embargo could lead to the fall of Batista's regime:


“Department has considered possibility its actions could have an adverse psychological effect GOC and could unintentionally contribute to or accelerate eventual Batista downfall. On other hand, shipment US combat arms at this time would probably invite increased resentment against US and associate it with Batista strong arm methods, especially following so closely on heels of following developments: 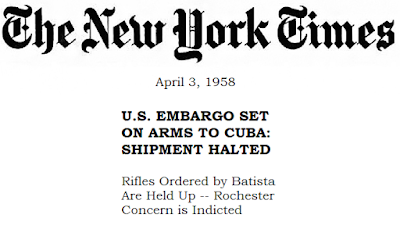 Twenty one years later as another Marxist Leninist regime took power in Nicaragua, the former U.S. ambassador to Cuba in 1958, Earl E. T. Smith wrote a letter to the editor published in The New York Times were he addressed the myth that the U.S. had been a steadfast supporter of the Batista dictatorship:


"To the contrary, Castro could not have seized power in Cuba without the aid of the United States. American Government agencies and the United States press played a major role in bringing Castro to power. I so testified before a Senate committee. As the U.S. Ambassador to Cuba during the Castro‐Communist revolution 1957‐59, I had first‐hand knowledge of the facts which brought about the rise of Fidel Castro."


Because of my briefing in Washington, my sympathies leaned toward Castro when I first arrived in Cuba. After a few months as chief of mission, it became more and more obvious to me that the Castro‐led 26th of July movement embraced every element of radical political thought and terrorist inclination In Cuba. The State Department consistently intervened ‐ positively, negatively and by innuendo to bring about the downfall of President Fulgencio Batista, thereby making It possible for Fidel Castro to take over the Government of Cuba.

The final coup in favor of Castro came on Dec. 17, 1958. On that date, in accordance with my instructions from the State Department, I personally conveyed to President Batista that the Department of State would view with skepticism any plan on his part, or any intention on his part, to remain in Cuba indefinitely. I had dealt him a mortal blow. He said in substance: “You have intervened in behalf of the Castros, but I know it is not your doing and that you are only following out your instructions.” Fourteen days later, on Jan. 1, 1959, the Government of Cuba fell.

The historical truth matters, and must not be left to the Castro regime and its agents of influence to rewrite the past with lies and half truths. The fact of the matter is that the United States did not approve of the 1952 coup against a democratic Cuba, and was working behind the scenes to pressure the Batista regime to restore Cuba's democratic order. Fidel Castro promised Cubans and the world that he would restore the old democratic order, but he lied and installed a Marxist-Leninist dictatorship instead.