Shadow Human Rights Summit: A Voice for the Voiceless 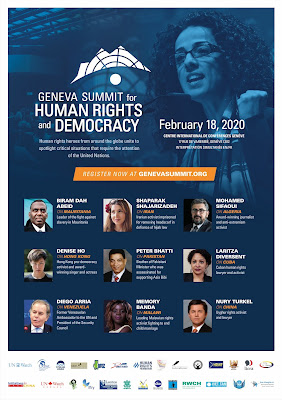 Human rights heroes to spotlight Algeria, China, Cuba, Hong Kong, Iran, Malawi, Mauritania, Pakistan, and Venezuela. This is the 12th time that human rights defenders are gathering at this important shadow human rights summit.  It was broadcast live on February 18, 2020 over the live stream video below.


Cuba was highlighted during the summit with a presentation by Laritza Diversent of Cubalex. She described how her legal aide service was shut down by the secret police, and how the dictatorship made threats against her person for being a human rights defender. Below is a quote taken twitter earlier today.

"In Cuba, the public prosecutor interrogated us as if we were terrorists. We feared having a trial without due process. We feared ending up in prison and not being able to do our work." #GS2020


Liberal International also reported over Twitter on her presentation and the fact that free legal advice is not one of the 240 services permitted by the Cuban government.

Cuban #HumanRights lawyer & activist, Laritza Diversent, addresses hundreds attending the @GenevaSummit where she explains that in #Cuba, "being a lawyer that offers free legal advice is NOT among the 240 services that citizens are 'allowed' to offer."#GS2020 #LIHRC pic.twitter.com/KaB7hZxQKK
— Liberal International (@liberalinternat) February 18, 2020


Venezuela was featured with political leaders of the interim government, intellectuals, and Rosa Orozco, the mother of Geraldine Moreno, a Venezuelan martyr.  The 23 year old university student and athlete, who was shot repeatedly in the face by Bolivarian National Guard members on February 19, 2014 during a protest in Venezuela. Geraldine died three days later on February 22, 2014. Six years later, her mom continues to demand justice.

“I lost my daughter and endured the absence of justice. This is my double tragedy." #GS2020 #Venezuela


This was Geraldine. This is the human face of repression in Venezuela multiplied thousands of times.