"The class struggle is continuing and it is our task to subordinate all interests to that struggle. Our communist morality is also subordinated to that task." -  Vladimir Lenin (1920)

The past couple of months should have been a wake up call on the international community's credulity regarding health data provided by communist regimes, such as China, and Cuba. It is now known that the first case was diagnosed on November 17, 2019 in Hubei, China.

China's focus from the start has been on its international image, and this includes censoring information that would have been useful to stopping the spread of the pandemic, but also helping coronavirus victims. The Committee to Protect Journalists reported on specific cases.


Li Wenliang, a doctor in Wuhan who was reprimanded for warning colleagues of a new coronavirus earlier this year, used the messaging app WeChat to share his concerns on December 30, 2019, according to The Wall Street Journal.

“Be careful, our group chat can be suspended,” a contact responded, according to screenshots purporting to show the private exchange. CPJ could not independently verify the screenshots, which were widely cited in online discussions and media reports after Li sickened and later died from the COVID-19 disease.

On March 7, 2020 a five-story Xinjia Hotel in China's Fujian province that had been converted into a "quarantine hotel" collapsed and killed 29 patients. China built what it called "two new coronavirus hospitals" in 12 days and used it as part of a propaganda campaign to promote its regime. Business Insider noted that "Official data [which should also be questioned], however, shows that the utility of the hospitals has yet to match the pace or spectacle of their construction, with the facilities running at less than half their projected 2,600 capacity."

Now Communist China is trying to spin conspiracy theories to draw attention away from its own culpability in making a bad situation worse, continuing to disappear prominent Chinese voices that have criticized the regime's response, and with their Cuban and Venezuelan allies they are spinning a yarn of Cuban medicine saving thousands of Chinese lives with a pioneering treatment, but that in fact arose out of research surrounding SARS and MERS years ago patented by private firms. However that doesn't stop Venezuelan tyrant Nicolas Maduro and the propaganda organ teleSur from repeating the talking points. 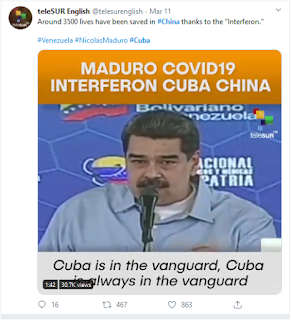 It is in this upside down environment that Marion Smith of the Victims of Communism Memorial Foundation has published an article in National Review titled "Why Do Global Medical Institutions Trust China?" in which he describes the role played by international organizations in the initial cover up of what now has become a pandemic.


"As the coronavirus spread from China across the world in January and February, the World Health Organization repeatedly praised Beijing’s efforts to contain it. The agency did so despite China’s censorship of medical professionals and evidence of undercounting deaths. As the second-largest donor to the United Nations, which oversees the WHO, China, it appears, has induced the agency to provide a veneer of legitimacy while it engages in cover-up, thereby worsening the global crisis."

Context must be provided to the unfolding global tragedy that began in China. The Roman orator Marcus Tullius Cicero observed in Oratio Pro Animo Milone XVI that "Maxima illecebra est peccandi impunitatis spes." (The hope of impunity is the greatest inducement to do wrong.) Communist China has been able to act with impunity invading and occupying Tibet in 1950, killing tens of millions of Chinese in the Great Leap Forward (1958 - 62), the Cultural Revolution (1966-1976), crushing the Tiananmen Square protests (1989), and forced organ harvesting (2000 - present).


Looking the other way at the crimes visited on tens of millions of Chinese nationals is now threatening many more lives around the world following the coronavirus coverup and the active complicity of the World Health Organization. Reverend Martin Luther King Jr. was right "Injustice anywhere is a threat to justice everywhere."

The Castro regime, that also has a history of committing crimes and covering up epidemics with impunity is once again being given the benefit of the doubt with regards to its claims that it has been coronavirus free.

This despite the February 2020 announcement by the Castro regime that there is a shortage of soap and detergent in Cuba that will not be alleviated until April 2020 or later, due to decisions made by the central planning authorities. This means that Cubans will not have access to soap to wash their hands.

Secondly that tens of thousands of travelers from Europe, China, and other areas heavily impacted by the coronavirus have been entering Cuba throughout this outbreak. At least 147,900 Italian tourists and 49,781 Chinese tourists traveled to Cuba in 2018 and Cuba's military run tourism industry sought to double the number of Chinese tourists.

The claim that Cuba did not have coronavirus in larger numbers under these circumstances was highly unlikely, but then North Korea continues to claim that they have no cases of coronavirus, despite having a border with Communist China, and South Korea having 7,979 cases.

In Nicaragua, where dictator Daniel Ortega and his wife, and first lady, Rosario Murillo carried out a mass march titled, "Amor en tiempos del Covid-19" (Love in the time of Covid-19), and mandated that public workers attend on Saturday, March 14, 2020. This was done against recommendations of the World Health Organization.

Unlike their North Korean and Nicaraguan counterparts, the Castro regime recognized reality to a certain extent. Three days ago the Cuban government reached a point where they had to acknowledge that the situation had changed and that Cubans were finally being impacted by coronavirus, after denying its presence for weeks.

Reuters reported the Cuban dictatorship's official press on March 11, 2020 that "four Italian tourists who were staying at a hostel in the southern town of Trinidad after arriving at Havana airport on Monday had presented respiratory symptoms and were taken to a hospital on Tuesday. On Wednesday, the hospital confirmed that three of the tourists had tested positive for the coronavirus, the broadcaster said."

It is important to note that Panama's Ministry of Health, a day earlier, on March 10th had reported that two Panamanians, ages 55 and 29 who visited Cuba had tested positive for the coronavirus when they returned home. 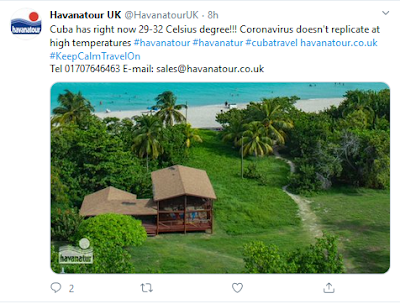 Despite this, the Cuban dictatorship's military run tourism industry continues to pitch Cuba as a travel destination and posted a tweet on March 13, 2020 at 11:01am claiming that Coronavirus does not replicate at high temperatures and that the island is now 29-32 degrees Celsius. Havanatour is owned and run by the Cuban military.

However even non-Cuban tour operators, in the past, have demonstrated a callous indifference for the lives of their clients. In September 2017 when Hurricane Irma, a deadly category five storm with 180 mile per hour winds was bearing down on Cuba and a hurricane watch already issued, tourists were still being flown into the island by British and Canadian travel agencies.The British travel agency "Thomas Cook defended itself saying the company followed the Cuban government's emergency instructions to the letter," BBC News reported.

Cayo Coco suffered the full impact of Hurricane Irma and was destroyed by the storm. They were flying tourists into Cuba to Cayo Coco a day prior to the storm's arrival, as reported by The Independent (United Kingdom).CBC News (Toronto) reported that Canadian tour operator Sunwing had elderly tourists flying into Cuba 24 hours before the Hurricane smashed into Cuba, forcing them to flee for their lives.

Needless to say, the Cuba's dictatorship has a no money back policy.

Meanwhile, the Castro regime sought to shut down a markets in Villa Clara, where merchants would sell products not available in government stores, leading to a large scale demonstration for communist Cuba with protesters shouting, “We want commerce! We want a solution! We want answers! We are not delinquents!” Rumors are circulating that they were going to shut them down to prevent the spread of coronavirus.

Returning to the issue of data and statistics, but shifting from health data to educational data. USA Today has published an important article on the literacy rates in Cuba pre-1959 and post-1959 that is a must read, but would also recommend reading Herald columnist Fabiola Santiago's essay on the subject.

Observing these lies that have been bought into by many who should know better, and many others who just absorbed it without critical thought. Theodore Dalrymple gave an analysis of the purpose of communist propaganda that, although terrible, is sadly too optimistic, but there is much truth to it for those already living under communism.


“In my study of communist societies, I came to the conclusion that the purpose of communist propaganda was not to persuade or convince, not to inform, but to humiliate; and therefore, the less it corresponded to reality the better. When people are forced to remain silent when they are being told the most obvious lies, or even worse when they are forced to repeat the lies themselves, they lose once and for all their sense of probity. To assent to obvious lies is...in some small way to become evil oneself. One's standing to resist anything is thus eroded, and even destroyed. A society of emasculated liars is easy to control. I think if you examine political correctness, it has the same effect and is intended to.”

Flagg Taylor in his 2015 essay in National Review, "What’s New in the New Political Correctness?" responded to Dalrymple's view, "My one quibble with Mr. Dalrymple is that communist propaganda’s purpose surely went beyond humiliation—it attempted to disrupt the link between people’s inner thoughts and reality—to erase the distinction between true and false." Both Taylor and Dalrymple ignore communist morality, which would give a better understanding of how communist propaganda operates.Vladimir Lenin stated the primary element of communist morality clearly in a speech to Russian communist youth on October 2, 1920.

"The class struggle is continuing and it is our task to subordinate all interests to that struggle. Our communist morality is also subordinated to that task. We say: morality is what serves to destroy the old exploiting society and to unite all the working people around the proletariat, which is building up a new, communist society."

This is why Fidel Castro denied being a communist, why Hugo Chavez called Fidel Castro a dictator during his first presidential campaign, and why Senator Sanders claims to be critical of Cuba and Nicaragua, when he has been a long time apologist, and was resistant to calling Venezuela  a dictatorship.

This denial of objective reality, truth and an ability to systematically lie to achieve is sometimes effective in taking over a country and imposing a totalitarian dictatorship, but is a total disaster when dealing with infectious diseases, and an outbreak such as the coronavirus.

On the other hand, democracies such as South Korea, and Taiwan (despite being diplomatically isolated by communist China) have successfully contained the spread of the disease and are exemplars that are the antithesis of the communist model.