We do not forget, we do not betray our principles and values, we are consistent, without fanfare, with serene courage, with generosity, without hatred but without fear: Long live the Varela Project !!! - Regis Iglesias Ramirez, May 10, 2021 over Twitter

Milan Kundera, the Czech writer, in his 1999 novel The Book of Laughter and Forgetting observed that "the struggle of man against power is the struggle of memory against forgetting." Memory provides context to unfolding events today, and helps to render informed judgements.

For example, nineteen years ago on May 10, 2002, carrying 11,020 signed petitions in support of the Varela Project, the Christian Liberation Movement's Oswaldo Payá Sardiñas, Antonio Diaz Sanchez, and Regis Iglesias Ramirez walked to the Cuban National Assembly with bulky cardboard boxes labeled Project Varela. The Christian Liberation Movement was founded by Catholic lay people in Havana in September 1988, and is part of a non-violent dissident movement that traces its origins and influences to the Cuban Committee for Human Rights that was founded in 1976. Today Regis Iglesias commemorated the anniversary in a Tweet (the content is translated in the quote at the top of the blog entry.)

The Varela Project, named after the Cuban Catholic Priest Felix Varela, sought to reform the Cuban legal system to bring it in line with international human rights standards. They had followed the letter of the law in organizing the campaign. 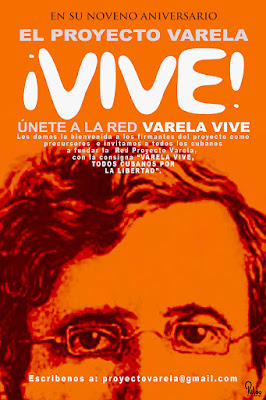 Former President James Carter visited Cuba in May 2002 and on May 15th gave a speech at the University of Havana, where he advocated for the lifting of economic sanctions on Cuba and "called for the Varela Project petition to be published in the official newspaper so that people could learn about it."

Yet the dictatorship's response to the nonviolent citizen's initiative, and to President Carter's request, was to coerce Cubans into signing another petition declaring the Constitution unchangeable and quickly passed it through the rubber stamp legislature. The Varela Project was not presented for debate before the National Assembly, which according to then existing law drafted by the Castro dictatorship meant that it should have been debated in that legislative body.

Havana announced, at the time, that the Cuban dissident movement had been destroyed. They spoke prematurely. First, the remaining activists who were still free continued gathering signatures and would turn in another 14,384 petition signatures on October 5, 2003, and they continued to gather more. Furthermore, the wives, sisters and daughters of the activists who had been detained and imprisoned organized themselves into the "Ladies in White." A movement that sought the freedom of their loved ones and organized regular marches through the streets of Cuba, despite regime organized violence visited upon them. This new movement was led by Laura Inés Pollán Toledo, a former school teacher.

Antonio Diaz Sanchez and Regis Iglesias Ramirez were released from prison into forced exile in 2010. Today marking this anniversary of the Varela Project, Regis Iglesias's following statement was published by the Christian Liberation Movement.

"Until now the only response to the more than 35,000 citizens who have supported this initiative has been persecution, kidnapping, prison, exile and murder. But until political pluralism and freedom of information are recognized and guaranteed, until economic freedoms are recognized for Cubans, an amnesty is not decreed, a new electoral law is not approved where citizens can be nominated by the people, and elections are not held in the midst of an environment of respect for popular sovereignty, diversity of opinions and we can freely choose the government that represents Cubans, we will not renounce to maintain our civic demand, remembering that the Cuban regime is a gangster regime that does not respect the rights of citizens or the sovereignty of Cubans."

President Carter made a second trip to Cuba in March 2011, and did not publicly mention Project Varela during that visit, but instead focused efforts on trading Alan Gross for the remaining members of the WASP network jailed in the United States on charges of espionage, and murder conspiracy that killed three Americans and a US resident in 1996, and calling for the lifting of economic sanctions on the Castro regime. President Carter also downplayed the threat of FARC, ETA, and ELN terrorists harbored in Cuba.

Less than two months after the visit, Cuban dissident and former political prisoner, Juan Wilfredo Soto Garcia (age 46) was arrested and beaten to death by Cuban regime police while protesting the dictatorship and died early on Sunday May 8, 2011. Months later on October 15, 2011 Laura Inés Pollán Toledo died under suspicious circumstances at the Calixto Garcia hospital.

Oswaldo Payá Sardiñas was killed on July 22, 2012 together with Harold Cepero, a youth leader of the Christian Liberation Movement, in a car "accident" that all the hallmarks of a state security operation copied after the East German Stasi, who trained intelligence operatives in the Castro regime.

Revisiting and remembering these historic moments is part of the struggle against forgetting, and the conversation that it may arouse will only serve, when backed up with facts, to strengthen memory with truth. Memory, and retentiveness are defenses against the Castro regime's totalitarian rewriting of history.