#OTD in 1961 Castro declared to artists and intellectuals 'Within the revolution, everything; outside of it, nothing,' and the regime continues to jail free thinkers today. 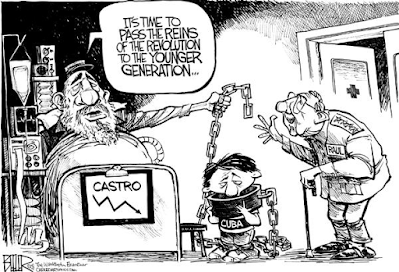 On June 30, 1961 Fidel Castro gave his speech to [Cuba's] intellectuals where he summed up the limits of artistic expression: 'Within the revolution, everything; outside of it, nothing,' he told intellectuals and artists. Nearly a decade later on April 27, 1971 the case of Heberto Padilla underscored the limits of artistic expression in Cuba.
Index on Censorship described the aftermath of Padilla's interrogation and self-criticism stating, "whatever the reason for his confession, it served as a harbinger of what was to follow: a period known as the Grey Five Years in which dozens of Cuban artists and writers were banished from public life." This was how intellectuals and artists would be dealt with who strayed out of the prescribed limits imposed by the Castro regime. 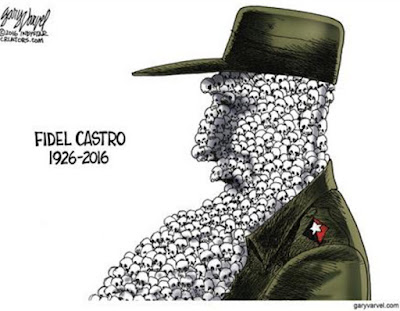 The war on artistic freedom is not unique to the Castro regime, or a mistake, but a feature of communist and fascist systems. Totalitarians have had a hostile relationship with the arts, and with artists seeking to control them. In the Soviet Union modern art was declared subversive by Josef Stalin, and socialist realism with an optimistic tone the politically correct style. Artists destroyed or hid their work that did not accord with the new aesthetic. In Nazi Germany, modern art was declared degenerate and a style that mirrored in appearance their Soviet counterparts, and repression was visited upon artists that did not adhere to the official style.
Sixty years after Castro's infamous speech and Cuban artists and intellectuals are persecuted and jailed for advocating for greater political and artistic freedom on the island.
Cuban artist Hamlet Lavastida, "a member of Cuba’s 27N movement of artists, journalists, and activists who advocate for greater political and artistic freedom on the island, was arrested on 26 June after returning to the island from an artist’s residency in Germany, according to 27N members", reported The Art Newspaper on June 28, 2021. "PEN America and PEN International [on June 28, 2021] condemned the detention of Cuban visual artist and activist Hamlet Lavastida, calling his abrupt imprisonment following a residency abroad an unjust, disturbing representation of the alarming government culture of hostility toward dissenting artists in Cuba," declared the organizations that defend free expression in a joint statement.

On May 18, 2021 Cuban authorities arrested and detained rapper and activist Maykel Castillo. On June 18th, the one month mark of this arbitrary detention, "PEN America, along with CADAL, the Center for the Opening and Development of Latin America, condemned the Cuban authorities for their arbitrary detention of Castillo and called for his immediate release." Julie Trebault, director of the Artists at Risk Connection (ARC) at PEN America stated, “the fact that Castillo has been kept in prison for more than a month—and that his family, friends, and supporters have been kept in the dark as to his condition and the reasons for his arbitrary detention—is simply unacceptable.”  Today, June 30th marks 36 days disappeared and jailed for saying what he thinks.

37 years ago the 1984 documentary Improper Conduct outlined how Cuban artists that did not conform, or were deemed to be engaged in “extravagant behavior” were sent to work camps or forced into exile by the Castro regime. The repressive nature of the dictatorship has not changed.

Amnesty International is circulating a petition in Spanish for signatures calling on Havana to end its harassment of artists, and today at 7:00pm the San Isidro Movement is calling to Tweet out to free those arrested on Obispo Street with the hashtag #LiberenALosDeObispo with the following statement over Twitter on June 28, 2021 with the attached image.

"No one should be deprived of liberty for defending their rights and expressing themselves in the face of injustice. Let us demand this Wednesday # 30Jun that #LiberenALosDeObispo and all those who have been unjustly detained for defending the rights that the Cuban dictatorship constantly violates." 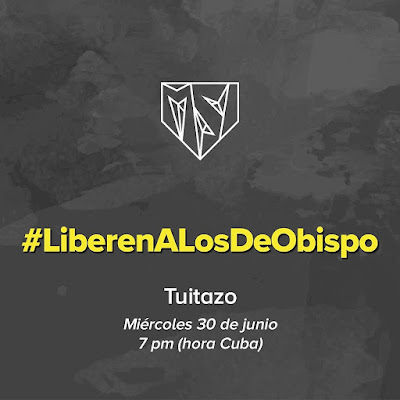