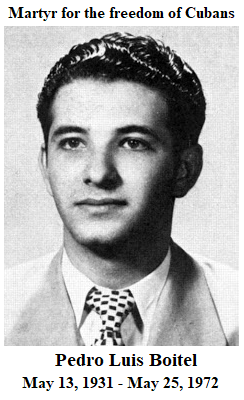 Martyred student leader Pedro Luis Boitel fought by Fidel Castro's side to bring an end to the Batista dictatorship and restore Cuban democracy. However, as Castro came to impose a communist regime, the student leader became a liability.


Pedro Luis Boitel was born in Cuba to a family of modest means of French origin. He studied at the University of Havana while working as a radio technician. He was also a poet. Opposing the dictatorship of Fulgencio Batista, he joined the July 26 movement led by Fidel Castro. The majority of the movement's members, like Pedro Luis, were anti-communists.

Once Batista left for exile and Fidel Castro took control, the anti-communist members of the July 26 movement became an obstacle to absolute power. Following the revolution, Boitel returned to University, where his fellow students nominated him to run for the presidency of the Federation of University Students in 1960.  Fidel Castro personally intervened to remove him from the presidency. Pedro Luis Boitel refused to betray the Federation of University Students. He sought to maintain academic freedom and autonomy. This made Pedro Luis an obstacle to the emerging communist regime.

As time went on and the dictatorial nature of the Castro regime became more apparent, the student leader became an opponent of Fidel Castro. Condemned to a decade in prison in 1961, he served the cruel and unjust sentence, but as the date of his release came and went, prison officials refused to release him.

While imprisoned, Boitel continued to challenge the repression and the impunity of regime prison officials.  He left a powerful impression on his fellow political prisoners. In 2009, Gregorio Asorio in an interview discussed how he first met Boitel while in prison for his opposition to the Castro dictatorship in the 1960s. Prison officials condemned black Cuban political prisoners for opposing Castro, thinking that they should be grateful to the dictator, and this thin man challenged the guards, declaring that Cuban blacks were part of the Cuban nation, and had helped found the Cuban nation in the struggle for independence. This man then cited Jose Marti's quote that anything that divides humanity is a sin against humanity. Gregorio introduced himself and asked his name, and learned that he was Pedro Luis Boitel.

In response to the years of cruelty, torture, and now denial of his freedom, he went on hunger strike on April 3, 1972. Pedro Luis Boitel died fifty years ago on May 25, 1972, after 53 days on hunger strike in Havana at the Castillo del Principe prison. Academic freedom and autonomy ended in 1960 and were replaced with fear, repression, and ideological litmus tests to attend university. It has still not been restored today. He was buried in an unmarked grave.

Fifteen years later, in the documentary Nobody Listened, Boitel's mother spoke on camera about her son's imprisonment and death.

Fifty years later, the Castro dictatorship's cruelty continues unabated, as does the courage of Cubans who oppose it.

Below is a poem by Pedro Luis written during his long years of imprisonment.

The Exile
by Pedro Luis Boitel
Distant melody that invades my room
shadows that travel the corners of my mind
my hands, destiny with experiences chained
that, that is the law of the exile.
Crosses of experiences etched on my skin
hurting me like the deadly disdain of a woman
covered with ephemeral times my heart subsists
nostalgic dependence on a child who forgot to grow up.
Memories turned into ghosts
those who besiege me while I rest
omnipresent shadows that disturb my dreams
while I evoke my country in my own way.
Island that disappears on the horizon
roaring station I once occupied
today only this withered exodus picks up the wind
petals scattered in a stream away from the sea.
Exile links me to the past
I am a slave to a concept, to an idea
I search among the memories for the beginning of everything
but I only find ashes, partially buried during my journey.
Exile has sentenced me to live imprisoned in nostalgia, sharing his cell
but as the years have passed I have learned to wake up,
and now in my reality I seek my emancipation, my path.