"We must not wait passively. A free Poland is our aim, but no one will give us that freedom. Our passivity will result in their murdering more and more of us, in more and more people suffering." - Anna Walentynowicz, January 1985

Anna's quote above from 1985 is relevant to the situation in Cuba today. Replace Poland with Cuba, and no one would be the wiser.  May Day 2022 is an excellent moment to reflect on and celebrate this woman who was a worker, and spent her life organizing workers to empower them.

The situation in Cuba demonstrates the opposite of worker empowerment.

Over 120 workers and trade unionists are jailed today in Cuba reports the Asociación Sindical Independiente de Cuba ( Independent Trade Union Association of Cuba ) in a "Declaration for May First" published on April 30, 2022.

Communist apologists did not believe the leaders of the Polish Solidarity movement in the 1980s and they do not  believe Cuban labor activists today.

You need not take my word for it, you should take the word of Cuban workers suffering under the communist dictatorship in Cuba, but you cannot ignore the International Trade Union Confederation (ITUC) which is the global voice of the world’s working people, and "represents 200 million workers in 163 countries and territories and has 332 national affiliates."

This is what they have to report about Cuba.

The government violates the right to collective bargaining, freedom of association and the independent representation of workers. It has decided to make mass redundancies, leaving hundreds of thousands of people jobless, and announced tougher repressive and disciplinary measures in the workplace. It is trying to develop a model that preserves the essence of the system, i.e. collectivism, state ownership of the means of production, centralised decision making, planning and prohibition of the individual accumulation of wealth, at the same time as demanding greater productivity from companies and workers, and denying economic, political and cultural freedom through increased control and repression.

According to the Plenary of the National Council of the CTC, “we have to show the world that the workers, the backbone of our society, will forge ahead until the economic situation has been overcome, certain that they are taking the only correct and just path possible”. Salvador Valdés, general secretary of the CTC, underlined the need to ensure that the 2011 Plan draws on the lessons of 2010: “The major economic challenges facing the country require the trade union movement to change its methods and approaches, to act as a healthy counterbalance to the violations and transgressions that may arise with the implementation of the changes”.

The initial results of this process demonstrate that, despite the prior preparation for these changes, there are still problems that need to be resolved. Although this is a predominantly administrative process, the union cannot be neutral and must be the first to ensure that workers are given the help they need and are not abandoned.

The number of politically-motivated arrests was estimated to have reached 1,224 in November 2010, which discourages the formation of independent trade unions, as the authorities view exercising freedom of association as a political activity.

There have been no changes in the Cuban labour legislation. The trade union movement is controlled by the Cuban state, and the leaders of the single union CTC are not elected by the workers but appointed by the state and the Communist Party of Cuba.

On 10 June, the former political prisoner José Ramón Castillo denounced various trade union rights violations in Cuba to the United Nations Human Rights Council. Amnesty International had declared him a prisoner of conscience and he testified before this forum as a victim of repression in Cuba. He stated that Cuban workers’ right to self-determination is not respected on the island. Workers do not have the right to organise trade unions independent of the state and five Cubans are currently serving prison sentences for having tried to organise independent trade unions. This information has been widely documented by the relevant international institutions.

The strike at the Gdańsk Shipyard in 1980 led to the Solidarity labor union forming. The firing of Anna Walentynowicz, a welder and crane operator on August 7, 1980, was the spark that led to the strike on August 14, 1980. She played an important role and became a life long trade union activist. Radio Poland reported in 2015 that Polish intelligence services had planned to murder Anna.

"Secret police files apparently indicate that a plan was hatched to poison Walentynowicz, and that the crime was set to take place in Radom between 19 and 21 October 1981, just two months before the imposition of martial law. However, Walentynowicz left the city, where she had been visiting workers, before the plan could be put into action."

Below is a 2019 video from the Polish Foreign Ministry on Anna's life.

The following video was made in 1980 during the last week of the strike inside the shipyard and reporter Julian Manyon interviewed Anna.

She is described as a "simple 51 year old woman who works as a welder in the shipyard became a kind of saint to the striking workers. a reminder of their grievances a symbol of their courage. Everyday she walked to pay her respects at a memorial for the 27 shipyard workers killed by the police when the government crushed the first strike in 1970. Since then Anna has fought a lonely battle for workers rights that climaxed on August 7 when she was sacked."

This courageous woman, together with Lech Walesa, and many other courageous Poles liberated their country in June 1989 and brought about a new birth of freedom, but she remained unsatisfied with the progress made for workers in Poland and continued to advocate for workers rights in Poland.

During the strike at the docks in Gdynia, Poland in February 2002 Anna said:

"The 21 demands that we put up in 1980 are still relevant. Nothing was fulfilled. People still have to struggle to be treated with dignity. That's scandalous."

Anna Walentynowicz died on April 10, 2010 in the Smolensk air disaster, along with 95 other Poles, including the then president of Poland, Lech Kaczyński. Russia claims the crash was an accident, but a Polish Commission accuses Moscow of responsibility for the disaster.

On this May Day 2022 we honor how Anna lived, and her legacy of union activism. 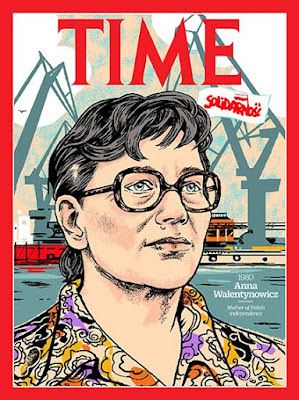