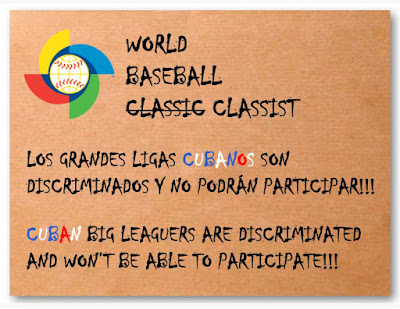 The Association of Cuban Baseball Fans (Asociación de Apasionados del Beisbol Cubano) is organizing a protest outside of the entrance to Marlins Baseball park at 6:00pm on September 19th "to protest against the discrimination of professional Cuban baseball players who will not be able to participate in the next World Baseball Classic"

Former Cuban prisoner of conscience Regis Iglesias in an OpEd in Diario Las Américas on September 11, 2022 explained the context that has led to this protest.

..."The MLB institution or the MLB Players Association come up with the idea of ​​allowing some franchises to visit Cuba for "friendly" matches or much worse, to make "agreements" with who enslave not only our athletes, but all our people. I will always protest and condemn those unsupportive positions. MLB cannot be a repressive extension of the Cuban Baseball Federation and the criminal and segregationist regime in Cuba.

Rob Manfred is not the owner of the farm like the commandos of the island and he cannot pressure the players with simplistic reasoning and opportunism to maintain the status quo with the tyranny or take shameful steps of recognition of it." ... "MLB's agreement with the Cuban Baseball Federation cannot be proudly brandished as it is part of the recognition of an institution, supposedly independent from a free country, to a repressive and segregationist institution from a country subjected to the tyranny of a communist party."

Major League Baseball (MLB) has repeatedly made two crucial mistakes, one that has been made by others, the professional baseball organization has confused the Castro dictatorship's junta with the Cuban people, and to highlight social justice issues in the United States, but ignoring them outside the United States, in places like Cuba.

On April 11, 2021 Mary O'Grady reported "Major League Baseball says 'values' compelled it to move this summer’s All-Star Game out of Georgia. But this piety doesn’t square with its long record of collaboration with Cuba’s military dictatorship, one of the world’s most notorious human-rights violators."

In 2016, Major League Baseball sent a proposal to the U.S. Treasury Department that would have turned Cuban baseball players into foreign workers of the Castro family while playing in the United States.  This is not hyperbole, the point man that Major League Baseball was dealing with is Antonio Castro, vice president of the Castro regime's International Baseball Federation, and Fidel Castro's son.

In 2018, after making their initial proposal, MLB was still trying to go into business with the Castro family.  Cuban baseball players would've been able to play in the Majors, but at a cost. According to Reuters, "MLB teams will pay the Cuban Baseball Federation a release fee for each player to be signed from Cuba." This raised some questions. How big will this release fee be? Will Cuban baseball players have to give up a big chunk of their salaries, like Cuban doctors have had to do?  The proposal was shot down by the Trump Administration.

MLB is tone dead on how this impacts Cuban fans. Even a team based in Miami paid a high price making the same mistake. 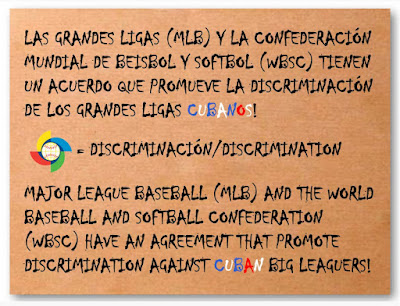 When the Miami Marlins hired Ozzie Guillen to manage the team, who in an interview in Time Magazine on April 9, 2012 declared" I love Fidel Castro" and that he respected both Fidel Castro and Hugo Chavez, I wrote an OpEd published on April 10, 2012 in Fox Latino.

In it, I gave a brief and incomplete summary of why Cuban exiles were upset with Ozzie Guillen's comments regarding Fidel Castro.

It began with the observation that "thousands of Cubans have been extra-judicially executed and millions have been driven into exile, while millions more have had their human rights systematically violated. The atrocities and systematic human rights violations have continued to the present." 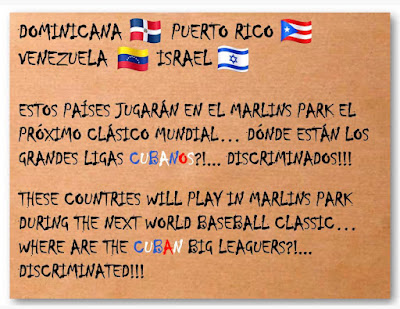 The essay concluded with my announcement that I would be boycotting the Marlins. Ten years later, and I have not gone to a Marlins game, nor do I plan to. ( I had gone to games prior to Guillen's outrageous defense of tyrants.)

However, I do encourage all Cuban and Cuban American baseball fans to go to Marlins Baseball Park at 6:00pm on September 19th to demonstrate this community's solidarity with Cuban baseball players, and to hold the Major Baseball League accountable. Cubans should be able to play in the World Baseball Classic representing the Cuban people, and it should be held in Miami, not the other side of the world. 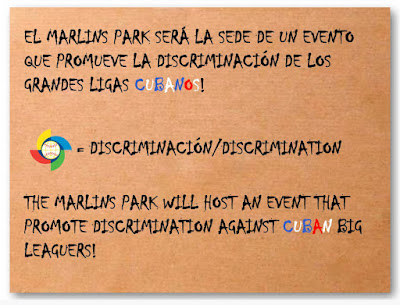