Reflection on the September 5, 1972 Munich massacre: Germany apologized for failing to protect Israelis, but when will Cuba apologize for training terrorists?

At 4:30 am Central European Time on September 5, 1972, as the Israeli athletes slept, eight members of the Black September faction of the Palestine Liberation Organization, carrying duffel bags loaded with AKM assault rifles, Tokarev pistols, and grenades, snuck into the Olympic Village in Munich, Germany.  They initially took 11 Israelis hostage.

They demanded the release of 234 Palestinians and non-Arabs jailed in Israel, along with two West German insurgents held by the West German penitentiary system, Andreas Baader and Ulrike Meinhof, who were founders of the West German Red Army Faction terrorist group. The hostage-takers threw the body of one Israeli hostage they had killed out of the front door of the residence to demonstrate their resolve.

Who had been training Palestinians in terror tactics since the early 1960s?

"Fidel Castro had been operating his own schools for guerrillas since 1961, starting with recruits from Latin America and Africa. By 1964, Palestinians and Europeans had joined the ranks," reported Claire Sterling in The New York Times Magazine on March 1, 1981.

The Castro regime welcomed the founding of the Palestinian Liberation Organization (PLO), and made first contacts with the Palestinian FATAH in 1965 in Algiers and Damascus.

Throughout the 1970s the Castro regime’s Dirección de Inteligencia ( Intelligence Directorate), sent their agents to PLO camps in Lebanon to train and assist Palestinian terrorists.

The Israelis refused to meet the hostage takers demands, the Germans breached the Olympic village, but the terrorists succeeded in killing all 11 Israeli hostages, and one West Germany police officer.

On the fiftieth anniversary of the terrorist attack the Germany government made a formal apology.

This leads to an obvious question. If the Germans have apologized for failing to protect the Israeli athletes and trainers killed by the Palestinian terrorists, then when will the Cubans apologize for training them to carry out the terror attack in Munich? 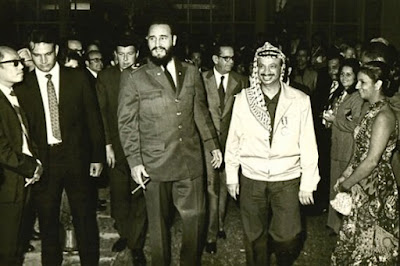 Yasser Arafat, chairman of the PLO, made his first official visit to Cuba in 1974 and met with Fidel Castro. According to Mansour Tahboub, former acting director of the Arafat Foundation, this was the first of as many as eight trips to Cuba.