The Cuban Dictatorship's sleight of hand

Yesterday in Banes agents of the dictatorship organized a mob to harass and assault Reina Luisa Tamayo, mother of prisoner of conscience Orlando Zapata Tamayo who died on hunger strike on February 23, 2010

The past year has been a difficult one for the Cuban dictatorship and it is now resorting to one of the tried and true tricks of its arsenal of political tactics: distraction. How to shift world attention from Cuba's prisoners of conscience , the human rights situation on the island, and acts of repudiation like in the video above which are extremely damaging? They trot out Fidel Castro and the claims of an impending nuclear holocaust.Its not the first time.

Recalling as far back as Mariel in 1979-1980 when something goes horribly wrong and the dictatorship is up against the ropes they need to create a distraction to give them time to extricate themselves. During Mariel it was emptying the prisons and insane asylums and mixing them into the general exodus of refugees along with their agents of influence who manipulated others and began dividing the Exile community between Marielitos and everyone else. Fidel Castro had denounced all those who wanted to leave as undesirables aand mixed in a few to taint the exodus, and organized acts of repudiation to dirty the hands of those who might have tried to separate themselves from the regime.

Another time was the August 5, 1994 Maleconazo when Cubans rose up demanding freedom and mass demonstrations engulfed portions of Havana for several hours and the aftermath of the July 13, 1994 tugboat massacre of which the regime was complicit hung over the tyrant like an albatross.

The regime used the threat of another Mariel opening all the ports and telling Cubans to leave that led to tens of thousands of Cubans fleeing on rafts and shifted the focus from the internal dynamics of a country that was imploding to the US/Cuba relationship and immigration. It legitimized the regime having the United States at the negotiating table not only with the international community but with internal actors in the dictatorship itself.

Then came the distraction of distractions. The Cuban dissident movement had made great inroads between 1994 and 1996 with the formation and build up of the Cuban Council that on October 10, 1995 formally requested permission of the Cuban regime to meet on February 24, 1996 amongst themselves to discuss the future of Cuba. The regime's response refuse the request close to the date of the meeting round up and detain the organizers and as many participants as possible, and then on February 24, 1996 carry out an act of state terrorism in which two Brothers to the Rescue planes were shot down in order to distract attention from the internal repression and refocus on US-Cuba relations over the international incident involving the shoot-down. However they failed in not shooting down Jose Basulto's planes that had all the recordings of the encounter along with eyewitness testimony from others present in the area.

Between 1996 and 1999 the opposition again regrouped and began to grow and carry out new actions. The Homeland Belongs to All, a document challenging the 1997 Cuban Communist Party version of Cuban history was a blow to the dictatorship that led to the authors' arrest and imprisonment. In the summer of 1999 Dr. Oscar Elias Biscet launched a 40-day fast for human rights and democracy in Cuba that spread from a home in Havana at the address Tamarindo 34 to fasting centers around the entire island. Towards the end of the year the Ibero-American Summit was held in Cuba and became the Dissidents summit. Oscar Elias Biscet was arrested for holding a press conference and sentenced to 3 years in prison.

Then came the Elian Crisis which shifted international attention away from what was happening in Cuba with the dissident movement and refocused it on Miami and on the custody battle over Elian. Meanwhile with the cameras occupied the repression and beatings against the opposition were brutal. After the Elian crisis was resolved and the opposition was able to regroup and carry out new actions the regime was placed on the defensive with the Varela Project which gathered 11,020 signatures and turned them in at the time of former President Jimmy Carter's visit to Cuba in May 2002 raising the profile of the opposition and putting the dictatorship against the wall, and the regime would continue on the defensive until March 18, 2003.

The Cuban dictatorship used the eve of the US invasion of Iraq when world attention was focused on the start of the war to carry out one of the worse crackdowns in over a decade combined with summary trials and long prison sentences for nonviolent dissidents and for the speedy execution of three hijackers who, although they had not killed anyone, had sought to flee to the United States by commandeering the boat with weapons.

The opposition dusted itself off after what the regime claimed was the destruction of the opposition and continued to work. Less than two weeks after the crackdown the Ladies in White would form, the wives, sisters, daughters, and mothers of the prisoners of conscience for the most part not politically active now became committed to their loved one's freedom. That combined with international pressure and horrific conditions in the prisons that drove these prisoners of conscience to defend their dignity taking recourse in the most extreme of nonviolent actions: the hunger strike.

At the end of 2009 with kidnapping and beating of Yoani Sanchez in November followed by the highprofile attacks by government organized mobs against the Ladies in White on International Human Rights Day (December 10, 2009). Things started to turn very sour for the dictatorship. The first half of 2010 would prove even more disastrous. The February 23, 2010 death of Amnesty International prisoner of conscience Orlando Zapata Tamayo and the junta's boorish attempts to smear the dead hunger striker's name and his mother's name backfired both internationally and internationally. The regime morally disgraced itself in the public eye exposing its true nature for the world and for many Cubans to see. This was followed by even greater brutal beatings of the non-violent Ladies in White beginning in March 2010. The national/international reaction was so powerful that they had to back down and allow the Ladies in White to march and for the first time in half a century appeal to the Catholic Church to serve a role as mediator in the political conflict between the dictatorship and the opposition.

The release of the prisoners of conscience placed quickly on planes to Spain straight out of prison and with the collaboration of the Spanish government to quickly move to split up the Cuban dissidents and spread them around the country and away from Spain's political nucleus: Madrid. The problem for the regime is that Spain is a democracy and despite the government's wishes the prisoners were able to speak out about prison conditions on the island and the lack of freedom outside of the prisons generating a big impact in Spain and internationally.

The regime is desperate to distract attention from this entire dynamic and out of nowhere appears Fidel Castro, in what I believe and hope is a false flag operation along with agents of influence in the United States, to distract attention from Cuba's internal problems and refocus on the United States, Iran, the nuclear threat, and US/Cuba relations try to generate friction were ever possible. Meanwhile as the international focuses on why Fidel Castro is wearing his olive greens instead of his track suit and if there is anything to all his talk of Armageddon they are distracted. Meanwhile in Banes, with no international media to cover what is happening, Reina Luisa Tamayo Danger, her family, and activists are regulary harassed and physically brutalized by government agents and mobs.

The two pictures below were taken today at her home and posted on Yoani Sanchez's twitpic page. For the purposes of getting the news out as fast as possible I've copied and pasted the photos here. Wihtout international attention and reporting these government thugs operate with greater impunity beating up on these Ladies in White. 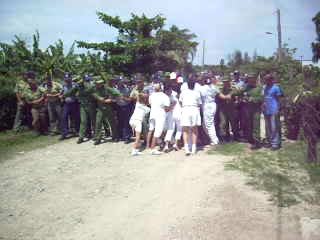 Government organized mobs surround the home hurling insults and the occasional physical blow against Reina and the activists in an act of repudiation. 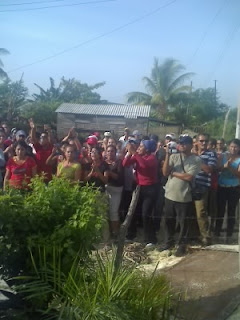 Last week the military cordon below blocking Reina from attending Mass and marching in remembrance of Orlando Zapata Tamayo could not have been more explicit. 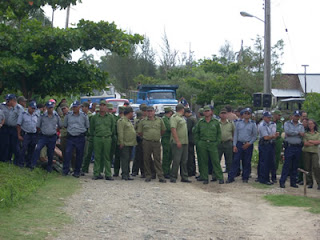 I close by pleading first with my friends let us maintain our focus on what is happening to Reina and the democratic opposition in general there is a crackdown underway, these are tough times, but they will get tougher if we abandon them to join in the speculation of what the devil is going on in Fidel Castro's head. Secondly, I plead with human rights organizations and the international media: to the first denounce what his happening their lives depend on you and to the second the news media don't ignore a good story because you've been sucked into the speculative universe of a false flag operation. Don't follow Castro's path of ignoring Cuba while speculating on international affairs. Its bad journalism and is also bad for the future of Cuba.
Posted by John Suarez at 7:50 PM