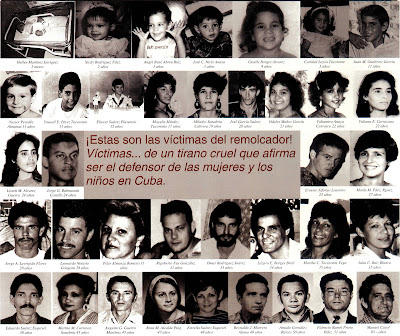 In the early morning hours of July 13, 1994 37 men, women, and children were killed by government agents as they sought to travel to freedom on board of the “13 de Marzo” tugboat. Eleven of these Cubans were children ranging in age from Hellen Martínez Enríquez, just five months old to Mayulis Méndez Tacaronte age seventeen.

International human rights bodies and organizations investigated the incident. The United Nations Human Rights Commission's special rapporteur on Cuba made the following observation on October 24, 1995 in his report on the human rights situation in Cuba to the UN General Assembly:

Although the Government maintains that the authorities bore no responsibility for what was considered to have been an accident, the Special Rapporteur received testimony from some of the survivors indicating that Government launches from the port of Havana tried to stop the 13 de Marzo with pressurized water jets and then deliberately rammed it, causing it to sink. Non-governmental sources informed the Special Rapporteur that the number of persons who died was not 32, as the Government had stated, but at least 37 and that the families have for a year now been asking for an investigation to be initiated.

The IACHR made three recommendations: 1) that the Cuban State conduct an exhaustive investigation in order to identify, prosecute and punish those responsible for sinking the tug "13 de Marzo" 2)recover the sunken boat and the remains of the victims and hand them over to their relatives and 3) that the pay fair compensation to the surviving victims and to the families of the dead for physical and nonphysical damages, including emotional distress.

Amnesty International investigated and made a number of recommendations in a July 1997 report:


∙ That a full and impartial investigation into the sinking of the "13 de Marzo" tugboat be carried out immediately, and that the findings be made public.

∙ That such an investigation be carried out in accordance with international standards, including the UN Principles on the Effective Prevention and Investigation of Extra-Legal, Arbitrary and Summary Executions.

∙ That anyone identified as being responsible for the loss of life be brought to justice in accordance with international standards for a fair trial.

∙ That the families and dependents of the victims be granted fair and adequate compensation within a reasonable period of time.

∙ That survivors or relatives of the victims be permitted to speak out about what happened without fear of reprisals.

∙ That no further reprisals be taken against anyone who seeks to peacefully protest or commemorate the sinking of the “13 de Marzo”.

∙ That no one should be imprisoned for attempting to leave the country illegally if they have not committed any other recognizable criminal offense.

∙ That strict orders be issued to law enforcement officials and agents acting on their behalf to abide at all times by the UN Basic Principles on the Use of Force and Firearms by Law Enforcement Officials.

Sixteen years have passed and all these recommendations have been essentially ignored. Over the years the regime has carried out reprisals against Cubans who sought to peacefully protest or commemorate the sinking of the “13 de Marzo” tugboat, and Amnesty International would denounce this acts of repression. Some Cubans spent months or years in prison for taking part in acts of remembrance. For example, in 2006 Amnesty reported that on July 13, 2005 approximately 20 people were detained while commemorating the "13 de Marzo" tugboat disaster of 1994. More than eight months later, five of them remained in custody without charge. At least one of them, Manuel Perez Soria was not released until April 24, 2007 after spending one year and eight months in prison.

All of these facts should lead to an obvious question: What can I do?

The answer is not obvious because there is a lot you can do. Let others know of this crime. Investigate the sources linked above for yourself. Forward this blog entry to other friends. Write your own essay or blog entry. Write a letter to the editor or an opinion piece in your newspaper. Call into a radio show on the day before or the day of the anniversary of the massacre. Organize a vigil or a moment of silence for the victims. Write a letter to the Cuban government asking them about when the remains of the victims will finally be returned to their families, and when there will be an exhaustive investigation where those responsible for the attack are brought to justice?

Is it too late after 16 years? No it is not. In the case of Cambodia the world is now witness to a measure of justice 30 years after genocide and 38 years later in the case of Northern Ireland's January 30, 1972 Bloody Sunday massacre were the British have cleared the victims of wrong doing and the Prime Minister acknowledged the crime committed by British soldiers and it was broadcast by the BBC. It did not happen on its own. John Lennon sang about it and denounced it in June of 1972 and U2 did the same eleven years later in 1983 and 25 years after the massacre activists launched the Bloody Sunday Trust. Justice is never too late but can only be accomplished with the persistence of people of good will.

There is much that you can do, but there are two things that you should not do. Do not fall into the trap of hating those responsible for this atrocity. Hate the sin not the sinner. Secondly, do not fall into the other trap of indifference and despair that leads one to do nothing. While we wait for justice let us work together to see that justice is done for the 37 men, women, and children extra-judicially executed 16 years ago on July 13.