I must affirm that it is just as wrong, or perhaps even more so, to use moral means to preserve immoral ends. [...]As T. S. Eliot has said: "The last temptation is the greatest treason: To do the right deed for the wrong reason." - Martin Luther King Jr. 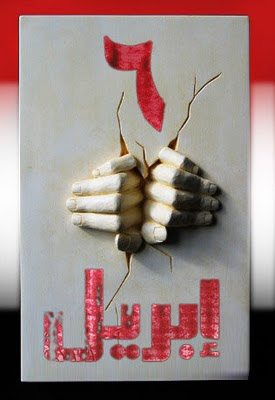 Today, received the following message from an activist in Egypt and am relaying it here via this blog at their request:

Subject: Urgent Call TO All Human Rights Defenders all over the World...

An Urgent call from the Egyptian demonstrators who are defending their country and for their right to live a free respectable life.

We appeal to all human rights organizations and to all the defenders of freedoms and human rights and all the free honourable media inside and outside Egypt to interfere immediately and support our peaceful demonstrations from the savage attack of the security against the demonstrators using all kinds of weapons, knives, gas bombs and Molotov bombs electric sticks to spread fear among the demonstrators and this is illegal in any place in the world and against all human rights concepts.

The victims till now today are 230 victims, killed and injured... and the security is protecting those criminals.

It's worth mentioning that the government has closed the internet and the mobile phone networks and many headquarters of different channels to ensure that our voice won't reach the media and people....

We need the help and support of all human rights organizations and all defenders of freedom all over the world to stop this massacre..

What's happening in Egypt now is a crime against humanity

Please Show your solidarity and Support....

As a human rights defender one at least cannot remain silent when injustices are being committed but at the same time one must educate oneself as best as possible as to what is taking place. This is not the first time on this blog where Egypt has been mentioned but no claim to expert status here. The background to the demonstrations in Egypt and the rest of the Middle East require some reading but all appearances are that in Egypt this is a grassroots pro-democracy movement and by and large a nonviolent movement. The interview with the pro-democracy activist below is a good representative of the grassroots:

Now that does not mean that a democratic transition is guaranteed but it does mean that it is possible. Some analysts have placed the chance of an Islamic authoritarian regime (Iran style) taking hold as being as high as around 50%. There are voices among the demonstrators that would support such an outcome and they are vocal about their opinions:

Such outbursts indicate that there is a long way to go for peace in the Middle East and that an armed peace with an authoritarian regime is not a permanent one. Let me underline that what follows is speculation from someone much more familiar with Latin America and Cuba specifically. However, since reading a good comparative peace on events in Tunisia from a Cuban perspective inspired the following notes and observations.

Asmaa Mahfouz, the young women speaking in the video above, was one of the voices that helped to spark the nonviolent uprising against Hosni Mubarak in Egypt.

When confronting an entrenched dictatorship with powerful interests and repressive capabilities one must have a great deal of courage which Egyptians have demonstrated during these protests.

Unfortunately as someone who has observed the practices of the Cuban dictatorship over the years the rent-a-mobs organized by the Egyptian regime to attack non-violent demonstrators is all too familiar. The description of events published in The Independent:

The protesters accused Mubarak's regime of unleashing a force of paid thugs and plainclothes police to crush their unprecedented, 9-day-old movement demanding his ouster, a day after the 82-year-old president refused to step down. They showed off police ID badges they said were wrested from their attackers. Some government workers said their employers ordered them into the streets.

In Cuba, peacefully marching women dressed in white have been beaten up by Castro's rent-a-mobs and state security agents in the streets of Havana . In the video below one can see the women, known as the Ladies in White, marching through the streets without interference and with onlookers applauding. Later in the same video (towards the end) with the regime's rent a mobs the women are beaten up and state security agents drag them on to regime vehicles.

Opposition democrats have had their home surrounded by these regime organized mobs bussed in to harass and assault non-violent activists. The video below was taken in 2010 at the home of Sara Marta Fonseca.

In 1980 and 1994 when mass uprisings occurred the rent-a-mobs along with plain clothes security agents armed with fire arms attacked nonviolent demonstrators. Photos taken below on August 5, 1994 by Karel Poort when Cubans took to the streets chanting freedom and down with Castro. Plainclothes security responded by firing into the crowd and detaining demonstrators.

Seeing, that same kind of behavior by the Egyptian authorities is troubling to say the least. The photos below taken by Amnesty International are but just two of many.

In both cases the regimes use provocateurs and rent-a-mobs to generate violence to justify security forces and the army cracking down. The description offered by the journalist below complete with a rescue by the military sounds a lot like an operation conducted by the security services. The Cuban regime has done this to both diplomats and journalists in Cuba.

The challenge to the civic movement is to maintain non-violent discipline during the struggle. If this is accomplished then the violence perpetrated by the regime and its agents boomerangs against the regime speeding up its loss of legitimacy and eventually power. On the other hand if non-violent demonstrators outraged by the atrocities resort to violence then all bets are off and the regime paradoxically has better odds of survival.

Comparative 2008 study by Maria J Stephan & Erica Chenoweth found that between 1900-2006 violent resistance succeeded 26% versus nonviolent resistance that succeeded 53% and the same study demonstrated that terrorism had only succeeded 7% of the time. Regime's like Castro's and Mubarak's know this and try to manipulate the situation to drive the opposition towards embracing violence because it will reduce the likelihood of success.


The video above by nonviolent expert Michael Nagler about Iranian uprising in 2009 is applicable to Egypt. Offers concrete recommendations for long term action.

A successful bloody revolution can only mean further misery for the masses. - Mohandas Gandhi

The function of violence is to obtain reform by external means, the function of nonviolent resistance, that is, soul-force, is to obtain it by growth from within, which, in its turn, is obtained by self-suffering, self-purification. - Mohandas Gandhi

The reaction that a ruthless dictator sets up in us either that of awe or pity is according respectively as to how we react to him violently or nonviolently. - Mohandas Gandhi

The bomb-throwers have discredited the cause of freedom, in whose name they threw the bombs. - Mohandas Gandhi

To answer brutality with brutality is to admit one's moral and intellectual bankruptcy, and it can only start a vicious circle. - Mohandas Gandhi

Armed conspiracies against something satanic is like matching Satans against Satan. - Mohandas Gandhi

Please offer comments and opinions below. I especially welcome Egyptians to offer their opinions and hold me to account.