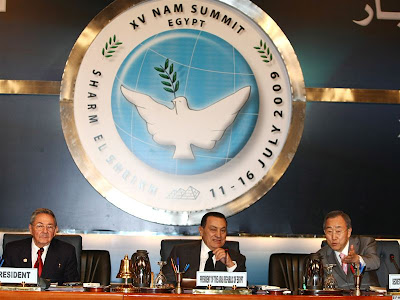 “Mubarak was oppressing and plundering his own people, he was an enemy of the Palestinians and an accomplice of Israel, the sixth nuclear power on the planet, associated with the military NATO group” - Fidel Castro, Monday February 14, 2011

"I reaffirm our deep friendship and appreciation to each of you, with whom we shared trenches in the fight against colonialism, apartheid, interventionism, the arms race, economic exploitation, disease and illiteracy, and who we have always received solidarity with the just struggle of my people to preserve their sovereignty, independence and overcome illegal barriers unilaterally imposed to its right to development. It only remains for me, and I'm honored to do so, to propose to the plenary to elect by acclamation as the new Chairman of the Non-Aligned Movement, His Excellency Mr. Mohamed Hosni Mubarak, President of the Arab Republic of Egypt. I understand that all agree. My congratulations to the new President and our best wishes for success." Raul Castro, IT IS AN HONOR FOR OUR COUNTRY TO TURNOVER THE LEADERSHIP OF THE MOVEMENT TO EGYPT, ONE OF ITS FOUNDERS, JULY 15, 2009

"I especially salute President Raul Castro, and express our appreciation for the great efforts exerted by during its Presidency of the Non-Aligned Movement, in defense of our positions and interests at international forums, and as a continuation of the constructive role played by this friendly country over the history of the Movement." - President Mohamed Hosni Mubarak before the Opening Session of the 15th of the Non-Aligned Movement, July 11, 2009