"Progress, far from consisting in change, depends on retentiveness. When change is absolute there remains no being to improve and no direction is set for possible improvement: and when experience is not retained, as among savages, infancy is perpetual. Those who cannot remember the past are condemned to repeat it." -George Santayana 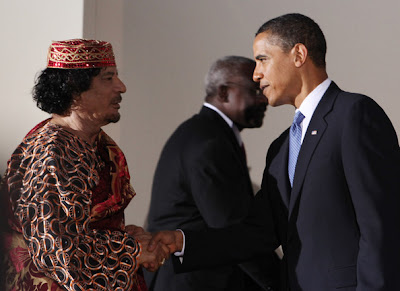 Qaddafi and Obama shake hands on July 9, 2009
Events unfolding in Libya demonstrate that so-called realism, a combination of Machiavellian realpolitik and moral relativism that refuses to identify evil systems as evil until it is too late and the body count unacceptably high is dangerously naive and unrealistic. In addition in the effort to make peace with evil and engage it in commerce a policy of appeasement and collaboration turns democratic nations and institutions into accomplices of repression and in extreme instances genocide and in some instances creating existential threats to their own country's existence.

Victoria Cummock, whose husband was murdered by Gadhafi along with 269 others in Pan Am 103 on December 21, 1988 wrote in Sunday's The Miami Herald in an opinion piece titled "The Monster We Enabled" how this racket is carried out:

Today Gadhafi and his henchmen are brutally slaughtering their own countrymen in their homes and in the streets of Libya. Libya is thousands of miles away from the United States. So why should the average American care about the mass murder of these people?Americans need to care because the U.S. government has empowered and enabled the Gadhafi regime in their continual use of force and violence to maintain a dictatorial rule. Unbelievable but true.

Currently, the United States is importing billions of dollars in oil from Libya. Quietly, it is also using U.S. taxpayers’ dollars to support the Libyan government with numerous programs, even after Gadhafi ordered a variety of terrorist attacks killing hundreds of innocent American civilians. This is an outrage.Unfortunately, America’s need for commercial dominance and our addiction to oil has put us in business with countries whose rulers are among the leaders in abusing the human rights of their own people.

Time and time again, we see a government’s pursuit of money and power on a collision course with justice and people’s human rights. Depending on the country, these betrayals play out in many different ways, sometimes bluntly and violently, as in Libya, but most often silently and without much notice.

In “civilized countries” like the United States and the United Kingdom, when their citizens are attacked, brutalized, held hostage or murdered, our leaders are quick to voice outrage and indignation, publicly condemning violence and promising swift justice and accountability. Privately, it’s another story and actions speak louder than words. These very same “civilized leaders” immediately take action to mitigate financial loss, feverishly looking to protect what is much more important to them than the rights of their own citizens. They protect what keeps them in power – money and their administration’s commercial interests .

On Monday, November 17, 2008 the Washington Post reported that President George W. Bush spoke with Gadhafi and discussed closure over a "painful chapter" in US-Libyan history. On May 15, 2006 Time Magazine in an article titled "Why Gaddafi's Now a Good Guy" described how the Bush Administration normalized relations with Libya "when Secretary of State Condeleezza Rice announced that the U.S. was restoring full diplomatic relations with Libya and held up the Great Socialist People's Libyan Arab Jamahiriya as 'a model' for others to follow." 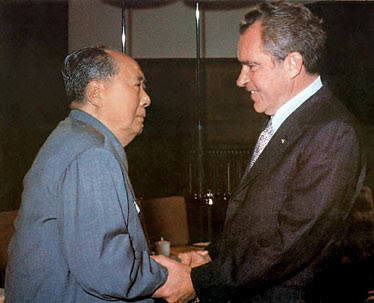 "Realism" led to a policy of transferring the manufacturing base of the United States and much of the Western world to Mainland China along with high technology to a regime that has murdered 65 million of its own people and inspired one of the worse per capita mass murderers of the 20th Century Cambodia's Pol Pot. This policy is not only immoral but national suicide. 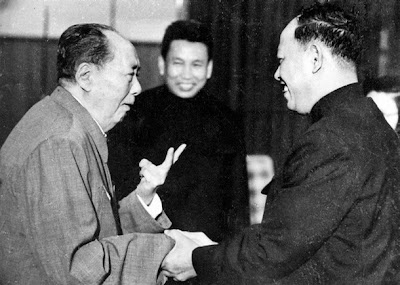 Mao Zedong with Pol Pot in the background

Sadly, the United States has been down this road before in the early 20th century when American companies such as Ford and IBM assisted the Nazi Third Reich in its economic development. IBM engineered a strategic business alliance with Nazi Germany and provided the punch card technology that would be used in managing the vast apparatus of the Nazi death camps. 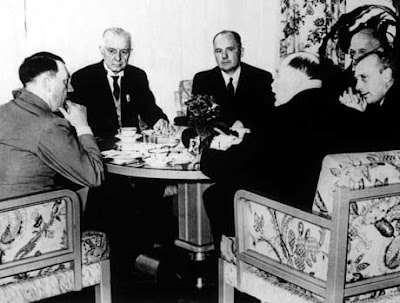 Thomas J. Watson, (middle) head of IBM and president of the International Chamber of Commerce, and members of the ICC's board meet with Adolph Hitler in 1937.

According to a October 8, 2002 article in The Village Voice "the infamous Auschwitz tattoo began as an IBM number. And now it's been revealed that IBM machines were actually based at the infamous concentration-camp complex." 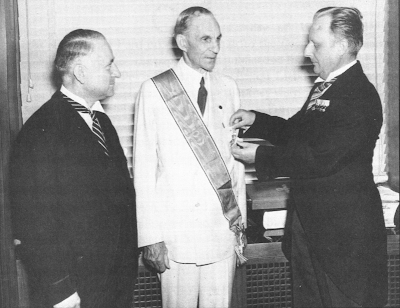 With regards to the Ford Motor Company, Henry Ford received, in July 1938, the Grand Cross of the German Eagle medal from the Nazi government (photo above). He had built auto factories both in the Soviet Union and in Nazi Germany doing business with both odious regimes.

In the case of doing business with Imperial Japan and the Third Reich the price tag in American lives alone was 292,131 dead on the battlefield.

Sadly, history repeats itself because human vices such as short sighted greed continue to have great impact on policy hopefully the price tag this time around will not be as high as the last time.