Don't be evil. Do what you can to resist it

"He who passively accepts evil is as much involved in it as he who helps to perpetrate it."
- Martin Luther King Jr. 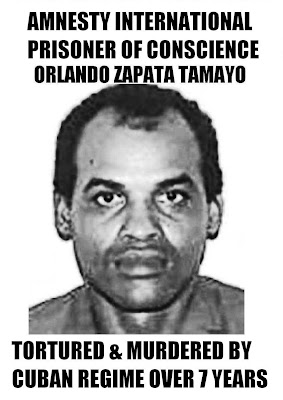 A year ago Orlando Zapata Tamayo was dying. On a prolonged hunger strike Orlando's sadistic jailers were refusing him water in an effort to break his spirit they tortured him to death.
The international press for the most part were not covering Orlando Zapata Tamayo's ordeal and was more interested in the political games the Cuban regime plays.

Others so focused on the persons committing evil fail to focus on denouncing and rejecting the evil that was being done. Mohandas Gandhi in his 1927 Autobiography made reference to a profoundly Christian concept and the failure of many to apply it: "'Hate the sin and not the sinner' is a precept which, though easy enough to understand, is rarely practiced, and that is why the poison of hatred spreads in the world."*

The phrase "love the sinner, hate the sin" is first found in St. Augustine's City of God:

For this reason, the man who lives by God's standards and not by man's, must needs be a lover of the good, and it follows that he must hate what is evil. Further, since no one is evil by nature, but anyone who is evil is evil because of a perversion of nature, the man who lives by God's standards has a duty of "perfect hatred" (Psalm 139:22) towards those who are evil; that is to say, he should not hate the person because of the fault, nor should he love the fault because of the person. He should hate the fault, but love the man. And when the fault has been cured there will remain only what he ought to love, nothing that he should hate. (14:6, Penguin ed., transl. Bettenson)

On March 8, 1983 Ronald Reagan addressed the National Association of Evangelicals in Orlando, Florida with the following remarkable passage:

In other words communism is evil. It is "a perversion of nature" that harms and destroys the societies in which it has been applied and the persons forced to live in that system. For decades many so-called leaders in the West refused to recognize and opted for detente. They failed to denounce evil and looked the other way hoping it would go away. That is not how evil is defeated but rather how it expands. It was the same in the 1930s when world leaders refused, at first, to denounce Nazism as evil and looked the other way as this other "perversion of nature" expanded and took more lives and territory and did more damage. That is why it is so important at whatever place you find yourself to do what you can. Do what you can to raise awareness and possibly save a life.

Try not to be counterproductive when taking action on behalf of human rights and liberty but do something. The murder of Carlos Costa, Pablo Morales, Mario De La Peña, and Armando Alejandre 15 years ago on February 24, 1996 blown to bits by air-to-air missiles fired by Cuban MiGs was an act of state terrorism carried on the orders of Fidel and Raul Castro and the murder of Orlando Zapata Tamayo through systematic physical and psychological torture are evil acts. These evil acts are also crimes that need to remembered and denounced so as not to be repeated and justice not revenge pursued. Google's corporate code of conduct is summed up with the phrase "Don't be evil." Now if one is to take seriously Martin Luther King Jr's claim that: "He who passively accepts evil is as much involved in it as he who helps to perpetrate it" then to avoid being evil one must resist evil and denounce it wherever you find it.

For example, one of the survivors of the Brothers to the Rescue shoot down Jose Basulto claims that the United States stood by passively knowing with an idea of what was going to happen on that Saturday afternoon and did not follow standard protocol to protect American lives and property. This would be an example of the passive acceptance of evil that Martin Luther King Jr spoke about. Another was ignoring the plight of Orlando Zapata Tamayo which gave the regime a green light to finish him off believing there would be no consequences for his death.