"They make a desert, they call it peace." - Tacitus, The Agricola 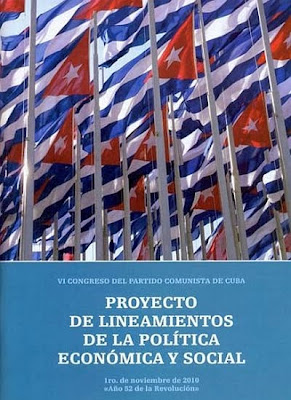 Address on March 31, 2011 to the Committee for Free Trade Union Conference on Cuba

The late leftist Argentine writer Julio Cortázar made an interesting observation in his book Around the Day in Eighty Worlds: "All profound distraction opens certain doors. You have to allow yourself to be distracted when you are unable to concentrate."

Fidel Castro inaugurated the Fifth Congress of the Cuban Communist Party on October 8th 1997. These Congresses were supposed to be held every five years. Its been over 13 years and now in a few days the Sixth Cuban Communist Party Congress will be inaugurated with great fanfare. Raul Castro announced the congress in November of 2010 along with "general guidelines" to be approved at the Congress.

This party congress will re-arrange some of the window dressing of the dictatorship in the economic order to preserve its brutal nature but it also serves another important function and that is to create distraction and buy time. The first demonstration of this is that the discussion of internal party issues and leadership renewal will not be discussed until the end of 2012 at a National Conference of the Cuban Communist Party. The party congress will only address economic issues. There are a number of factors for the timing but will touch on three and focus on the third:
The regime has sought through their official bloggers and through their government daily Juventud Rebelde as highlighted in its November 13, 2010 article titled "Las líneas del futuro" [The Lines of the future] in which Cuban youth are called to participate and that their opinions and contributions will be greatly appreciated in the rich debate. ( Is it possible that the title also offers an ironic look into the future with the continuing long lines of the past?)

As mentioned earlier the last party congress was over 13 years ago and this presents an opportunity to divide the youth between those who having lived through the process and have no illusions and those undergoing it for the first time that will participate in the gatherings leading up to the congress with the illusion that it will make a difference.

Children born under the dictatorship old enough to remember the previous party congress have a different perspective and through cyberspace are expressing themselves. For example Yoani Sanchez, old enough to remember her first political activities as a young pioneer in the 1970s shouting insults at President Carter has written thoughtful essays on the subject of the congress on her blog Generation Y.

On November 10, 2010 in her essay, The Art of Speaking Without Speaking, Yoani offers a concise description of the meeting's guidelines:


The Draft Guidelines for the Communist Party’s VI Congress is a good exercise to sharpen our senses, a model example to evaluate the practice of speaking without speaking, which is what state discourse is here.

Its more than thirty pages of text contain only economic proposals, more appropriate for the Ministry of Finance than for the compass of a political party. It’s true that it lacks the language of the barricade, resolving everything based on slogans, but it suffers from being a sugar-coated list of what could be done if the system really worked. For those who think my skepticism is exaggerated, take a look at the points from past congresses and check to see how many of them really came to pass.

Claudia Cadelo wrote in her blog Octavo Cerco (The Eighth Circle) in her December 8, 2010 essay What Changes?:


With great effort I’ve managed to read the eleven pages of “The Transformations Required in the Public Health System.” I have the impression that if we took out all the ideological apologies -- such as, “the direction of our glorious Party,” or this one, “the immense historic responsibility we have for the future of the fatherland” -- the text would only be three pages. Sadly, the ability to synthesize has never been a virtue of those who govern us.

To make matters worse, in the meat of it there’s not much there, other than a shifting and rearranging of equipment and personnel from here to there, the well-known and prioritized “internationalist” work, and a strange insinuation that there is a surplus of doctors -- I say it’s strange because it’s true but I didn’t expect them to say it.

In another blog entry titled These Peculiar Guidelines, less than a month later on January 10, 2011 Claudia writes:


But people are tired. People stopped recognizing socialism, even in books, long ago, because the history of the Revolution seems too much like the history of a 19th century capitalist monopoly. In parliament no one has been classified as “unqualified” or “unreliable” (as they have been on the layoff lists), and not one delegate to the National Assembly has been laid off under the concept of inflated payrolls. It is in the neighborhoods where 500,000 CDR members are going to be left “unoccupied.” So the spirit of the meeting is tense; even the poster announcing it reminds us: “Attendance will be taken.”

Although there is an attempt to strictly control the content of these meetings people are beginning to lose their fear and are frustrated. Later in the same essay Claudia describes what she has heard concerning the tension at this gathering:


My friends tell me (the meeting in my neighborhood hasn’t happened yet) that things got hot. One retiree said it was time to see young people leading the country, another said he was tired of discussing planning and reforms that never changed anything, a lady announced she is retiring because as long as they aren’t talking about raising wages they can’t count on her, and the Party member murmured, ending the meeting, which would be the last time the core would be called together. Raul Castro’s government has reached out to a people who are tired and skeptical, and bored with seeing the same movie over and over.


In her January 31, 2011 essay titled "Unanimity" Yoani Sanchez describes one of the regime organized meetings prior to the congress to discuss the document:


He cleared his throat before explaining why they were meeting, in the sober drama that is rarely seen anymore. In his hands he held, like a script, the blue booklet with the guidelines for the Sixth Communist Party Congress, and behind the table those present included municipal and provincial officials. Before yielding the floor, he stressed that they should stick to what was written on these pages and only discuss economics. He stressed this last word to emphasize it, to ensure that they didn’t claim their right to “free association” or demand that they be allowed “to freely enter and leave the country.” E-CO-NO-MICS, he stressed again, widening his eyes and raising his eyebrows to emphasize it again, while staring directly at the most troublesome employees.

Later on in the same essay Yoani Sanchez describes the aftermath of the meetings and its significance for the April congress:


The next day the workplace had returned to its routine. A mechanic who had been sitting very close to the president no longer remembered a single one of the guidelines. The girl from the warehouse summed up the discussion of the previous afternoon for her friends with a simple, “Ah… more of the same.” And the manager’s chauffeur skeptically shrugged his shoulders when a colleague asked what had happened. Many experienced that day as sample of what will happen in the Conference Center next April, a sneak preview of the Cuban Communist Party Congress. In just a few months they will see the same staging unfold on their TV screens, but this time it was they themselves who were the actors, raising their hands in unanimity before the stern gaze of the director.

In the case of the Castro regime over the past 52 years the ability to engage frequently in profound distractions has opened the door to its own survival. Unfortunately, Cuba observers all too often have followed Cortázar's advice and allowed themselves to be distracted when unable to concentrate. The same phenomenon was also seen among Kremlinologists who never saw the collapse of the Soviet Union as a possibility.

When the dictatorship announces the layoff of a million state employees because they can no longer pay them they call it reform and a good part of academia goes along with it. At the beginning of 2011 the regime began to lay off workers. When people power movements erupted in Egypt and Tunisia capturing the imagination of the world the regime slowed down and suspended the layoffs out of fear of creating conditions for their own demise.


If there is one lesson over the past 52 years it is that political considerations have priority over economic considerations in order to preserve the regime. When it is convenient to decentralize in order to survive the regime will do that as it did in the early 1990s and as it appears to be doing today. At the same time when things improve and regime survival depends on the re-centralization of economic control at the expense of economic growth as was the case in the late 1990s and through the 2000s they will do that as well, but the important consideration is that the Cuban people are tired of this regime and want change.
Thank you very much.