Reflection on the events in Libya 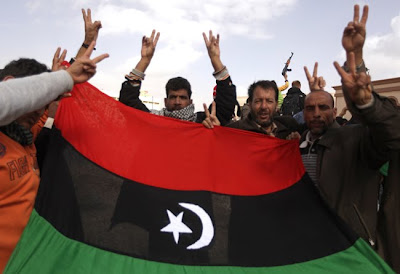 Muammar Qaddafi is a brutal dictator that has ruled Libya over 42 years. Despite efforts by academics and consultants to rehabilitate his image for overseas audiences the systematic repression of Libyans has remained a constant. The fog of war where truth is often the first casualty makes analysis a risky proposition but fortune favors the brave.

Over the past century of human conflict certain patterns and trends have emerged that even autocrats recognize and take into account when facing an energized opposition. University Academics Maria J. Stephan and Erica Chenoweth in their study Why Civil Resistance Works: The Strategic Logic on Nonviolent Conflict compared the outcomes of 323 nonviolent and violent resistance campaigns from 1900 to 2006. They found that major nonviolent campaigns have achieved success 53 percent of the time, compared with just under half that at 26 percent for violent resistance campaigns.

The American pioneer in the academic study of non-violent resistance, Gene Sharp, in the above video gives a profound peace of advice:

"Think, don't just act. Don't just get an inspiration and go out and do this or we should do that. That actually happens people do that - get inspired to do something and they may get inspired in their ignorance and may do something quite disastrous. Study. Study what is the nature of your regime; where is it strong but find out where it is weak because every dictatorship has its weaknesses. You have to know about non-violent struggle and you need to learn the ability to think strategically. To think how to plan your actions in the future so that they can have impact and counteract the repression of your opponents. Frequently in revolutionary groups there will be people inside of the movement who may offer opinions that are their genuine opinions. They may be the mouthpiece of your opponent -they may be actual employees of the intelligence services assigned to wreck this movement. To not only urge the opposition movement to use violence and create dissension within the resisters, but also to actually carry out violence in the midst of otherwise peaceful demonstrations. Or in extreme cases even to carry out the violence on a larger scale like political assassinations. Then blame it on the revolutionary movement and then have a rational and so-called justification for rounding up revolutionaries and jailing many people who had nothing to do with these activities. The people who are always pushing for violence and acts of sabotage really need to be isolated and because they well may be the agents of your opponent. Don't fall for that. The nonviolent struggle has to be continued on a nonviolent basis. Otherwise you destroy your own power capacity and with that the capacity to achieve your objectives."

Too bad for nonviolence to work?
The argument that Qaddafi's actions are so monstrous that non-violence cannot work against him proved seductive to the opposition. Unfortunately history does not back up this argument because other tyrants every bit as brutal as the Libyan dictator have been defeated and in many cases driven from power with nonviolent resistance.

Erich Honecker, the communist dictator of the German Democratic Republic had standing orders for guards at the Berlin Wall that stated: "Do not hesitate with the use of a firearm, including when the border breakouts involve women and children, which the traitors have already frequently taken advantage of." Scores of East Germans were extra-judicially executed.

Slobodan Milošević was accused of genocide and the murder of thousands in the former Yugoslavia.

In Poland, Gen. Wojciech Jaruzelski was accused of ordering soldiers to fire at workers protesting price increases in December 1970. At least 44 people were killed and more than 1,000 injured. On his watch Polish priests and dissidents were tortured and killed. One of them Father Jerzy Popiełuszko murdered by agents of the Polish internal intelligence agency, on October 19, 1984 was beatified on Sunday, June 6, 2010 in Warsaw with more than 150,000 Poles in attendance.

In Chile, beginning on September 11, 1973 Augusto Pinochet and until 1990 ruled as the countries military dictator and stands accused of 3,197 extrajudicial killings and the torture of 29,000.

All of these dictators: Pinochet, Jaruzelski, Milošević, and Honecker were driven out of power by nonviolent resistance movements and there are many more. In the cases of Pinochet, and Milošević this was long after violent attempts to remove them from power had failed miserably.

The conclusion of this historical overview in the Libyan context is that Qaddafi's brutality has achieved its objective: drive the opposition from its nonviolent origins into a violent posture. Based on an analysis of over a hundred years of conflicts and their outcomes the Libyan despot has doubled his chances of maintaining power.

Gene Sharp - Civilian-Based Defense from a e on Vimeo.

You can't beat a plan without a plan
This leads to an additional conclusion the importance of strategic planning. Gene Sharp outlined in the video above but it bears repeating because of the contrast between events in Egypt and Libya. In the Egyptian case the opposition was able to obtain training and develop over a number of years a strategic vision and communicate it to the populace. All indications are that in the Libyan case the uprising was spontaneous. The level of repression and violence created a split in the military that has now exploded into open warfare between Qaddafi and what are now described in the press as rebels. Unfortunately for Libya the abandonment of Nonviolent action as the opposition's means of combat, in which it had a strategic advantage over Qaddafi, for war in which that advantage is lost means that the process will be much bloodier.