In Defense of Mohandas Gandhi and the efficacy of nonviolent resistance

A saint who considers himself superior to a sinner forfeits his sainthood and becomes worse than the sinner, who unlike the proud saint, knows not what he is doing. - Mohandas Gandhi

I have never, even in my dream, thought that I was mahatma (great soul) and that others were alpatma (little soul). -Mohandas Gandhi 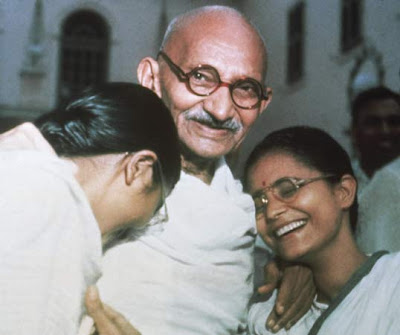 Andrew Roberts’ March 26, 2011 Wall Street Journal review titled “Among the Hagiographers” of Joseph Lelyveld’s book "Great Soul" about Mohandas Gandhi is more of a polemic against both the Indian independence leader and the power of nonviolent resistance then a book review. There is much to respond to in the review but will focus on criticism of Gandhi’s claim that nonviolent resistance could work against the Nazis. In August 6, 1940 Mohandas Gandhi published a letter from “a Dutch friend” in which his friend argued that:

“Through Nazism, the German youth has lost all individuality of thought and feeling. The great mass of young people has lost its heart and is degraded to the level of a machine. … A friend of mine, whose work it is to cross-examine German prisoners of war in England, was deeply shocked by the spiritual narrowness and heartlessness of these young men, and agreed with me that non-violence could not be applied with any success against such robots...”

Gandhi responded to the letter pointing out that the author had sent his name and address but that he (Gandhi) withheld both out of fear that harm would come to him if they were made public. Gandhi responded:

“Non-violent action, if it is adequate, must influence Hitler and easily the duped Germans. No man can be turned into a permanent machine. Immediately the dead weight of authority is lifted from his head, he begins to function normally. To lay down any such general proposition as my friend has, betrays ignorance of the working of non-violence.”

University Academics Maria J. Stephan and Erica Chenoweth in their 2008 study "Why Civil Resistance Works: The Strategic Logic on Nonviolent Conflict" compared the outcomes of 323 nonviolent and violent resistance campaigns from 1900 to 2006. They found that major nonviolent campaigns have achieved success 53 percent of the time, compared with just under half that at 26 percent for violent resistance campaigns. Finally there study also suggests “that nonviolent campaigns are more likely than violent campaigns to succeed in the face of brutal repression.” This also depends on the nonviolent opposition movement having a strategic vision and maintaining its non-violent posture even under the worse repression.

Looking back there are two high profile examples that indicate that Mohandas Gandhi was right.

Between 1940 and 1945 under the Nazi occupation of Denmark many Danes were able to organize an effective and completely nonviolent resistance that undermined German war fighting capability and successfully blocked efforts to deport and exterminate its Jewish population to the Nazi death camps by first hiding Danish Jews then ferrying them out to neutral Sweden.

An equally dramatic case took place in Germany in February and March of 1943 when German (non-Jewish) wives married to Jewish men and their relatives organized mass demonstrations in Rosenstrasse Street in Berlin to protest their husband’s arrest and deportation escalating until the men were released and returned home.

"But the Jews of Germany can offer satyagraha under infinitely better auspices than the Indians of South Africa. The Jews are a compact, homogeneous community in Germany. They are far more gifted than the Indians of South Africa. And they have organized world opinion behind them. I am convinced that if someone with courage and vision can arise among them to lead them in non-violent action, the winter of their despair can in the twinkling of an eye be turned into the summer of hope. And what has today become a degrading man-hunt can be turned into a calm and determined stand offered by unarmed men and women possessing the strength of suffering given to them by Jehovah. It will be then a truly religious resistance offered against the godless fury of dehumanized man."

The attacks against Mohandas Gandhi continue because his political philosophy is relevant in today's world and offer's individuals the insight into the real nature of power which is that of the individual giving or denying his or her obedience to a central authority and the great power that signifies over tyrants and dictators of all ideological stripes.

In reality Gandhi needs no defense because as Michael Nagler points out at the Metta Center blog: "Gandhi had a genius for turning apparent setbacks in to opportunities. I have a feeling he’s going to do the same with this one."
Posted by John Suarez at 9:10 PM