The Cuban Regime's International Impact on Human Rights in China 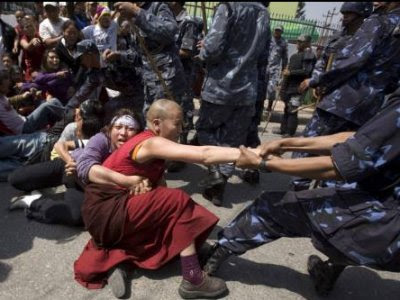 When dealing with human rights and Cuba there is an obvious focus on the systematic human rights violations inside of Cuba that often leads to overlooking the impact of the regime in multinational and international institutions. In the past this blog has reported on some of the many countries the Castro regime has made an impact in: Angola, Argentina, Ethiopia, Sri Lanka and Venezuela now China is added to this list.

The communist regime in Cuba has been a staunch ally of the Chinese communists at international forums such as the United Nations Human Rights Council and both regimes engage in a mutual admiration society and make a mockery of human rights concerns. For example when the Chinese communists released a report attacking the human rights record of the United States Fidel Castro praised the Chinese regime's report while decrying "Washington's hypocrisy." International media covers this kind of "news" as a Tibetan monastery remains under siege by Chinese military forces and hundreds of monks have been detained and sent for "reeducation" while others were beaten to death during a military assault on the monastery. Not surprisingly the Castro brothers' dictatorship has nothing critical to say about the Chinese occupation of Tibet nor of its treatment of the Tibetans. Nor is it surprising that China and Cuba are two of the top four countries in the world when it comes to restricting internet use.

Nevertheless, when these regime's start recommending that the other be tougher on their human rights defenders a new low has been reached that has managed to surprise some. For example, China underwent its first Universal Periodic Review (UPR) on February 9, 2009. During this session the Cuban Ambassador, Mr. Juan Antonio Fernández Palacios, after a short, ideologically biased and rambling run through of Chinese history then recommended that the Chinese regime repress human rights defenders in China.

The Observatory for the Protection of Human Rights Defenders, a joint program of the World Organization Against Torture (OMCT) and the International Federation for Human Rights (FIDH) declared in a formal statement on February 13, 2009 that it was:

all the more concerned that China accepted a recommendation formulated by Cuba, according to which China should “maintain, in strict compliance of law, to avoid the impunity for people who are qualifying themselves as human rights defenders with the objective of attacking the interests of the state and the people of China”.
"This recommendation is unacceptable, and sends a very bad signal to Chinese human rights defenders who are strongly repressed on a daily basis due to their peaceful human rights activities, and as such is a flagrant violation of the provisions of the United Nations Declaration on Human Rights Defenders, adopted by the General Assembly of the United Nations on December 9, 1998", said Eric Sottas, OMCT Secretary General.

One month later on March 13, 2009 the Observatory for the Protection of Human Rights Defenders spoke before the 10th Session of the United Nations Human Rights Council on Item 3 stating:

The Chinese rejected serious recommendations to improve its human rights standards and accepted the Cuban regime's recommendation to increase repression on human rights defenders. This is another example, of many, in which the Cuban dictatorship is a counterproductive actor in international affairs and in the case of the people of China and Tibet the Cuban regime's statements and actions have left them less protected. 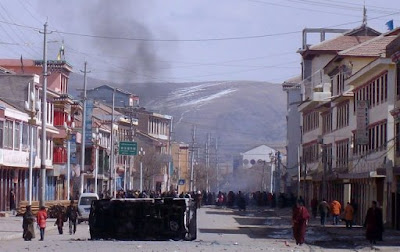 There are real life consequences to what takes place at these international forums as are taking place now at the Kirti Monastery that erupted into a crisis requiring the world's attention due to the loss of life and brutality visited on nonviolent people. The Tibetan government in exile reports on events in occupied Tibet:

The Chinese government has sealed off Kirti Monastery by deploying armed security forces to crackdown on Tibetans following the monk's suicide on 16 March. Since then a large group of Tibetans stood guard at the Kirti monastery to prevent the Chinese police from taking away monks for detention. The Tibetans gathered at the monastery, who were mostly elders, were severely beaten by the police as they attempted to resist the police from taking away around 300 monks in around 10 military trucks on the night of 21 April. The crowd was dispersed by the police who indulged in indiscriminate beating. Two elderly Tibetans, Dongko, aged 60, and Sherkyi, 65, died due to severe beating. The latest report we have says that 300 monks have been removed from the monastery and are detained at unknown locations.

The Chinese regime's response is to ban foreigners from visiting the affected area (to avoid eyewitness testimony) on the atrocities committed by the "Peoples Liberation Army (PLA). Meanwhile Tibetans cry out for international attention and solidarity. In addition to the attack on the monastery Chinese Christians were detained to prevent them from celebrating Easter this past week.

The Cuban regime's participation in covering up human rights abuses in China along with its calls for increased repression on human rights defenders make it complicit with the Chinese regime in these crimes against the Tibetan and Chinese people.