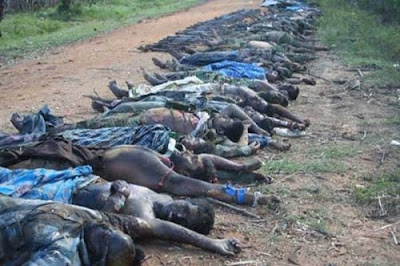 May 30, 2011 Update: Cuba opposed a reopening of the Sri Lanka case before the 17th Session of the UN Human Rights Council according to Navi Pillai, the High Commissioner for Human Rights.

When dealing with human rights and Cuba there is an obvious focus on the systematic human rights violations inside of Cuba that often leads to overlooking the impact of the regime in multinational and international institutions. In the past this blog has reported on some of the many countries the Castro regime has made an impact in: Angola, Argentina, Ethiopia and Venezuela now Sri Lanka is added to this list.

Back on May 28, 2009 the Cuban regime was one of 29 developing countries that backed a Sri Lankan-proposed resolution describing the conflict as a “domestic matter that doesn’t warrant outside interference”. The Cuban government's diplomats took the lead in blocking efforts to address the wholesale slaughter taking place in Sri Lanka. The Foreign Policy Association reported that:

As expected, Cuba’s seat on the United Nations Human Rights Council has already become an obstacle to the process of investigation and recognition of gross human rights offenses. Yesterday Cuba succeeded in blocking debate on abuses in Sri Lanka, which many countries have pushed for after the extreme violence that rocked the country earlier this month.

Amnesty International at the time said that “[t]he vote is extremely disappointing and is a low point for the Human Rights Council. It abandons hundreds of thousands of people in Sri Lanka to cynical political considerations.”

The consequences of that vote continued to be felt in 2010 and Amnesty International continued to campaign for victims of repression in Sri Lanka. On April 8, 2011 Amnesty International issued a call to the United Nations Secretary General (UNSG) Ban Ki-moon to make public the report prepared by a 'panel of experts' that is to be handed to the UNSG on April 13, 2011.

All of the above is proof of the wisdom of Martin Luther King Jr.'s observation written in 1963 from a Birmingham jail that:"Injustice anywhere is a threat to justice everywhere. We are caught in an inescapable network of mutuality, tied in a single garment of destiny. Whatever affects one directly, affects all indirectly."

Do your part to demand justice for the victims of systematic human rights violations in Sri Lanka and in doing so help undo some of the damage committed against the people of Sri Lanka by the Castro regime. Remind the world that justice anywhere is a threat to injustice everywhere because we are all "caught in an inescapable network of mutuality" for good or ill. Let it be for the good.