Return to the Center's Lessons for Cuba

"You can't have human rights without God." - Otto von Habsburg 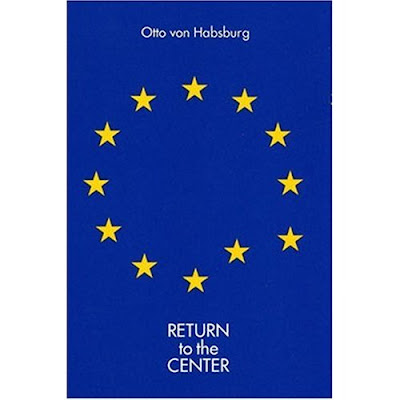 Just completed reading Otto von Habsburg's Return to the Center (Zurück zur Mitte) translated by Carvel de Bussy and published back in 1993. The past 18 years have only provided greater context to this extraordinary book that offers a reflection on Central and Eastern Europe's democratic transition; the implosion of the Soviet Union and the emergence of the European Union. This in itself is enough to recommend reading this book but there is much more to gain. This blog has a focus on Cuba which although obviously not in Europe is a product of Western civilization for good or ill. Even the current crisis and totalitarian regime that Cuba is suffering is a product of heresies that arose out of the heart of Europe in the nineteenth century. The nationalism born of the French Revolution combined with Communism, a creation of the fevered imagination of Karl Marx. Otto von Habsburg, a Christian statesman, is the antithesis of both and has much to offer anyone trying to sort out the present crisis in Cuba. Below are brief excerpts from this book and clips of Otto von Habsburg offering insights on the challenges faced by the West today.

"At Dumbarton Oaks in which there was just three countries represented: the United States, Great Britain and Russia. Russia’s representative at that time was Maxim Litvinov who was no longer foreign minister but he was still carrying on this matter. And it was when these three met at Dumbarton Oaks in Washington the firs thing Litvinov read was that for Russia - For Stalin there was an absolute base condition: In the past you always had a reference as to the Supreme Power or to God or to something like that and that he wanted to make all those ghosts of the past disappear and put man at the place of God into the treaties. That was when for the first time Russia demanded that there shouldn’t be any mention of any supreme being. Although it was in my opinion it was absolutely erroneous also for the very simple reason: you can’t have human rights without God without a last authority because to submit it to the sort of changing majorities is no ultimate authority and consequently it makes no possibility of putting something which is the point of reference.” - Otto von Habsburg, World Security Network 2007

"When the Goddess of Reason was placed on the altar two hundred years ago during the French Revolution and when it was announced that God was dead or had never lived, there began the greatest crisis humanity had suffered up to then. This led in the twentieth century to the erection of the concentration camps of National Socialism and the Communist gulags. - Otto von Habsburg, Return to the Center pg. 217

"However , one could not imagine until the Wall came down and it was possible to travel through the former East Bloc without difficulty, the extent to which the socialist system had destroyed not only individual lives, but also those of the least political persons. It was truly the Evil Empire. The worst was that the people were spiritually crushed. Some of the finest lived in psychiatric clinics or in prisons and work camps in a concentration camp atmosphere. But the individual was robbed of any initiative or joy of living also in the schools, the universities, the Army and in professional life." Otto von Habsburg, Return to the Center pg. 113-114 "The degree of sensitivity with which certain circles react to the word totalitarianism is striking. They repeatedly refuse to use it for Communism or the allegedly new shapes it is assuming." - Otto von Habsburg, Return to the Center pg. 176

"Certain people often seem to feel more sympathy for the overthrown dictators than for those who bled under their terrorism." - Otto von Habsburg, Return to the Center pg. 114

"In most countries nowadays arrested terrorists who allege an ideological reason for their acts of violence are considered to be political prisoners and enjoy certain privileges which are not given to normal criminals. This is especially manifest in areas of Europe which are most at risk, the Basque country and Northern Ireland. The penalties for mass murder are more than mild as in Spain, for example there is no longer even life imprisonment." - Otto von Habsburg, Return to the Center pg. 179


"The patriot loves his country and respects other nations; the nationalist idolizes his people and looks down on others. Man cannot live without religion. If he renounces God and His moral order, he automatically turns to false idols that fill the empty place of the Almighty. The Nation was such a demon in the thought-world of the nationalists. Figuratively speaking, it was the "Superman" over and above Good and Evil." - Otto von Habsburg, Return to the Center pg. 220


"Trees with roots in evil do not grow to Heaven. Let us not forget: there was a period of delusion when even a British Liberal like Lloyd George congratulated the Germans on having a "great Fuhrer." After his defeat, the time had come at least in the West for a free Europe. There were admirers of Stalin who simply refused to see what was going on in the Soviet Union. And in 1989 we experienced the "Gentle Revolution" in the east of Central Europe. The evil is loud and the good is soft. The sound of Hell is shrill, whereas the angels whisper. And in spite of this, the positive forces finally win out. - Otto von Habsburg, Return to the Center pg. 223

"The right to a homeland does not expire in one generation. The Jews have proven this. They remained true to the Zionist ideal for two thousand years. On every Long Day they greeted each other in the small synagogues of Central and Eastern Europe with the phrase: "Next year in Jerusalem." How unrealistic that must have sounded at that time! Still because Israel was not prepared to dismiss its homeland from its heart, Jerusalem's day has come after millennia." - Otto von Habsburg, Return to the Center pg. 224

"We believe as Christians that man is the image of God and not only an accumulation of cells. He has rights that were not given him by any race, class or collective group and which they likewise cannot take away from him. The dignity of man is of divine origin and thereby stands above the power of the state." - Otto von Habsburg, Return to the Center pg. 214