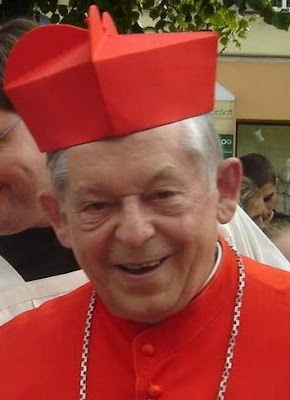 Cardinal Józef Glemp
Pope Bendict XVI will be visiting Cuba arriving first in Santiago, Cuba on March 26, 2012 to hold a Holy Mass in Antonio Maceo Square to celebrate the 400th anniversary of the discovery of the image of the Virgin of Charity of El Cobre and will be departing from Havana two days later. A healthy debate has erupted around the trip and state of relations between the Cuban Catholic Church and the Castro regime. The debate over the role played by the Catholic Church in Cuba and its Cardinal Jaime Ortega could do with a little added context.

Cuba is not Poland. Poland is a profoundly Catholic country. Nevertheless there are parallels between the Catholic Church in Cuba and Poland when confronted with a communist regime.
Reading over the role of the Polish Cardinal Józef Glemp in the penultimate chapter of the 1999 book, The Sword and the Shield: The Mitrokhin Archive and the Secret History of the KGB by Christopher Andrew and Vasili Mitrokhin, which covers the role played by the Vatican, the Church in Poland, the KGB and the Polish intelligence agency, the STB. According to the Mitrokhin Archive, the Catholic Church was heavily infiltrated by state security agents because they viewed it as a profound threat. At the same time when martial law was enacted and many of the more radical elements in the Solidarity movement counseled a general strike, Cardinal Glemp counseled restraint. The Polish communists felt that the Cardinal's message served their agenda and they rebroadcast it several times.

The U.S. Library of Congress* in their Country Studies on Poland has a section that analyses the relationship between the Polish Catholic Church and the state. The following excerpt covers the last two years of Cardinal Wyszynski and the arrival of Glemp in 1981:

In 1979 the triumphal visit of Pope John Paul II to Poland boosted the Polish cultural self-image and turned international attention to Poland's political and spiritual struggles. The next year, the church lent vital moral support to the Solidarity labor movement while counseling restraint from violence and extreme positions. In 1981 the government requested that the church help it to establish a dialog with worker factions. Needing church approval to gain support among the people, the government revived the Joint Episcopal and Government Commission, through which the church gradually regained legal status in the early 1980s. In 1981 the Catholic University of Lublin reopened its Department of Social Sciences, and in 1983 clubs of the Catholic intelligentsia reopened in sixty cities. Twenty-three new church-oriented periodicals appeared in the 1980s, reaching a total printing of more than 1.2 million copies in 1989. Nevertheless, state censorship, paper rationing, and restriction of building permits provoked serious conflicts with the Polish government in the last decade of communist rule.

Wyszynski died in 1981. He was replaced as primate by the less dynamic Cardinal Józef Glemp, who attempted to continue the dual policy of conciliation and advancement of religious rights. By 1983 several activist bishops and priests had broken with an official church policy they saw as too conciliatory toward the regime. In a 1984 meeting with Prime Minister Wojciech Jaruzelski, Glemp again attempted to obtain official recognition of the church's legal status as well as freedom for imprisoned dissidents. Later that year, the murder of dissident priest Jerzy Popieluszko by Polish security agents fueled a new confrontation between church and state. The Jaruzelski government, which had met with Glemp seeking the legitimacy that would come from renewed diplomatic relations with the Vatican, abandoned its conciliatory tone and returned to the pre-1970 demand that the church limit itself to purely spiritual matters and censure politically active priests.

The Archdiocese of Havana released an editorial today in advance of the Pope's visit which states in part:

It will be difficult to reach the proper social harmony and the necessary economic development, without a new political consensus of all our diversity. To achieve it, as we have repeated on other occasions, the patriotic path of encounter, of dialogue and reconciliation among all Cubans should be taken. At the moment this method may appear unreachable. The actors best positioned in the political mechanisms - equally in officialdom as in the internal opposition and in the groups in our diaspora that stand out - many times give the impression of not accepting this methodology.

Cuba is a plural country, where the majority of its citizens, at the margin of political, economic, social and religious differences advocate for a independent, democratic, developed homeland with social justice and without external interferences in our sovereign affairs.

This editorial, combined with the prayer sessions by Cardinal Ortega for the health of Fidel Castro when he fell ill in 2006 and just recently for Hugo Chavez who underwent surgery in Cuba appears to be part of an effort to strengthen the position of the Cuban Catholic Church. Its not the first time that a Cardinal has publicly prayed for the life of a tyrant. For example, the German Cardinal Michael von Faulhaber ( who criticized Nazism and called for an amnesty of all prisoners in the concentration camps) in 1936 also prayed for the life of Adolf Hitler. In the case of Poland the Church's policy of accommodation angered activists and some within the Church for being too soft and in the end the Polish regime eventually rejected the Church's role in political affairs and sought to limit their sphere of influence. On the other hand the Church managed not to alienate itself with the democratic opposition and when the final crisis of the regime arrived was able to play a constructive role. Time will tell if the same pattern repeats itself in Cuba.