Remembering Cuban women and their ongoing struggle for freedom

The Cuban transition wears a skirt, its rhythm is marked by so many women who will achieve a more inclusive, maternal, free country :-) - Yoani Sanchez, on twitter March 8, 2012
"They can either kill us, put us in jail or release them. We will never stop marching no matter what happens." - Laura Inés Pollán Toledo, Ladies in White founder (February 13, 1948 – October 14, 2011) 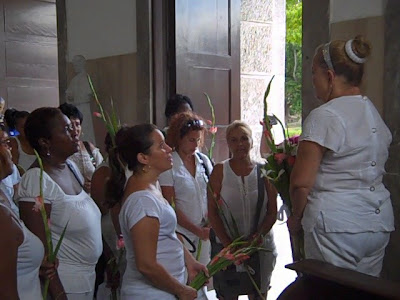 Laura Pollán addressing other Cuban Ladies in White
Today the world seeks to celebrate women's accomplishments around the world on International Women's Day and in the case of Cuba that requires that the Cuban Ladies in White and the Rosa Parks Women's Civil Rights Movement be recognized. Over the past half century of totalitarian rule in Cuba there has been a systematic and brutal denial of all human rights and Cuban women have suffered doubly because the regime claims to have brought equality to women in Cuba. Much like its claims on race relations what that means is that women who speak out about injustices they have suffered are silenced.
These women have confronted it head on and suffered harassment, beatings, threats of sexual violence and in at least the case of Laura Inés Pollán Toledo a mysterious illness and unnecessary death. At the same time these women have achieved notable achievements. They managed to get their loved ones out of prison, because despite all the repression the Ladies in White suffered, they continued to march in the streets of Havana demanding that human rights be respected and their loved ones freed on a regular basis. 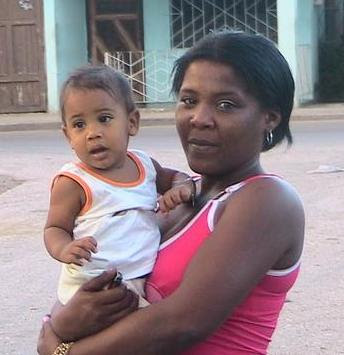 Yris Tamara Pérez Aguilera
In the interior of Cuba, Yris Tamara Pérez Aguilera of the Rosa Parks Women's Civil Rights Movement has been "disappeared" and badly beaten up by State Security agents on more than one occasion. On March 3, 2012 in Placetas, Cuba she was held down by police men and assaulted by one of them, Yunier Monteagudo Reina who pulled down her pants saying that he would “get on top of this black.” Her "crime" is defending human rights.
On November 30, 2011 in Havana, Cuba three women engaged in a public demonstration with a banner that read: "Enough of the lies and deceit of the Cuban people. End hunger, misery and poverty in Cuba." Ivón Mayesa, Blanca Hernández y Mayra Morejón demonstrated in front of the store “La Isla de Cuba”, before crossing the street and continuing their protest at Havana’s Fraternity Park. The Coalition of Cuban American Women described what happened next:

On Wednesday, November the 30th, three female human rights defenders, members of the group “Ladies in White’ were dragged, beaten and violently arrested in a crowded public park in Havana for displaying a white sheet that read: “Down with Hunger, Misery, and Poverty”, “Stop lying and deceiving the Cuban people”. Ivón Mayesa, Blanca Hernández (77 years old), and Mayra Morejón cried out Freedom! at the Fraternidad Park, before dozens of citizens. Some of the onlookers who tried to prevent the arrest of the three women were pepper-sprayed by the policemen. Mayesa’s husband, Ignacio Martínez Montejo, was also beaten and arrested and is detained at the Acosta Police Station in Havana. Hernandez and Morejon were released but the whereabouts of Ivon Mayesa are unknown to her family since her arrest.

Standing up and demanding human rights and economic justice in Cuba led to beatings and imprisonment and in at least one case the untimely death of a beloved activist. Let us remember their courage and support their demands for freedom and justice. 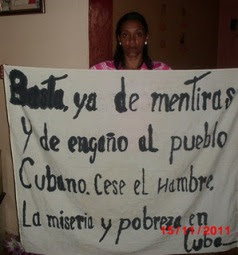 Ivon Mayesa
Posted by John Suarez at 10:45 AM