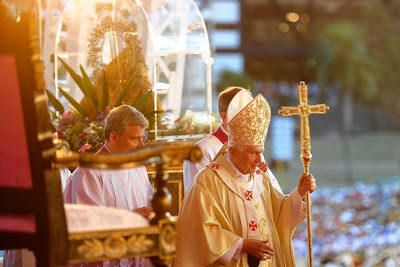 Pope Benedict XVI's visit to Cuba is of immense significance on numerous levels: spiritual, historic and political. In preaching the gospel of Jesus Christ the Pope is also preaching the nonviolent nature of Christ's message and sacrifice which also informs the current situation in Cuba.

In the days leading up to the visit and presently there is a wave of repression along with increased restrictions on cell phone usage and home phone lines. Over a hundred Cuban opposition activists have been detained to prevent them attending the Papal Mass. Historically, Pope Benedict XVI's visit on the 400th anniversary of the discovery of the image of "La Virgen de la Caridad del Cobre" has great significance because it was a predecessor, Benedict XV who in 1916 granted the request of veterans of the war of Cuban Independence to name her the patron saint of Cuba. It also underlines the fact that Cuba's catholic roots long predate the current totalitarian communist nightmare.

The Pope's message is in sharp contrast to both the militaristic image and message projected by Raul Castro and the dictatorship. A low point captured on video by international media was the detention of a man who shouted "down with communism" who was taken away and beaten by men dressed in Red Cross uniforms prior to the Pope's mass in Santiago de Cuba. His whereabouts remain unknown.

Thus far the Pope on this visit to Mexico and Cuba has said a number of things of great interest to Cubans and all people of faith.

"Dear brothers and sisters, before the gaze of Our Lady of Charity of El Cobre, I appeal to you to reinvigorate your faith, that you may live in Christ and for Christ, and armed with peace, forgiveness and understanding, that you may strive to build a renewed and open society, a better society, one more worthy of humanity, and which better reflects the goodness of God. Amen." - Pope Benedict XVI , March 26, 2012 Santiago de Cuba, Plaza Antonio Maceo Square

Recognizing the just aspirations of all Cubans

"I come to Cuba as a pilgrim of charity, to confirm my brothers and sisters in the faith and strengthen them in the hope which is born of the presence of God’s love in our lives. I carry in my heart the just aspirations and legitimate desires of all Cubans, wherever they may be, their sufferings and their joys, their concerns and their noblest desires, those of the young and the elderly, of adolescents and children, of the sick and workers, of prisoners and their families, and of the poor and those in need." - Pope Benedict XVI , March 26, 2012 Antonio Maceo International Airport, Santiago de Cuba

Cuba looking to the future

"Dear friends, I am convinced that Cuba, at this moment of particular importance in its history, is already looking to the future, and thus is striving to renew and broaden its horizons. Of great help in this enterprise will be the fine patrimony of spiritual and moral values which fashioned the nation’s true identity, and which stand out in the work and the life of many distinguished fathers of the country, like Blessed José Olallo y Valdés, the Servant of God Félix Varela, and the acclaimed José Martí." - Pope Benedict XVI , March 26, 2012 Antonio Maceo International Airport, Santiago de Cuba

"Naturally the church must always ask itself if it’s doing enough on behalf of social justice in this great continent. This is a question of conscience which we must always ask ourselves. That means asking what the church can and must do, and also which it can’t and shouldn’t do. The church is not a political power, it’s not a party, but it’s a moral power. Since politics fundamentally should be a moral enterprise, the church in this sense has something to say about politics. I repeat which I’ve already said: the first thought to the church is to educate conscience, thereby creating the necessary sense of responsibility. That means educating conscience in individual ethics as well as in public ethics, and perhaps that’s where the problem lies." - Pope Benedict XVI, March 23, 2012 with journalists during the flight to Mexico

On Church's approach to Cuba

As I’ve already said, I feel in absolute continuity with the words of the Holy Father John Paul II, which are still extremely relevant. That visit of this pope inaugurated a path of collaboration and constructive dialogue, a path which is long and demands patience, but which goes forward. Today it’s evident that the Marxist ideology as it was conceived does not correspond to reality, and thus a society cannot any longer be built upon it. New models must be found, with patience and in a constructive way. In this process, which demands patience but also determination, we want to help in a spirit of dialogue, in order to avoid new trauma, and to serve progress towards a fraternal and just society which we desire for the whole world. We want to cooperate in this sense. It’s obvious that the church will always be on the side of liberty: liberty of conscience, liberty of religion. We make a contribution in that sense, including the simple faithful who contribute to this progress going forward. - Pope Benedict XVI, March 23, 2012 with journalists during the flight to Mexico

Relevant to this conversation is the essay by Franciscan Friar, Daniel P. Horan citing Thomas Merton's writings on Christian nonviolence and explaining that at its heart it arises from the common good:

Nonviolence is perhaps the most exacting of all forms of struggle, not only because it demands first of all that one be ready to suffer evil and even face the threat of death without violent retaliation, but because it excludes mere transient self-interest, even political, from its consideration. In a very really sense, he [or she] who practices nonviolent resistance must commit himself [or herself] not to the defense of his [or her] own interests or even those of a particular group: he [or she] must commit himself [or herself] to the defense of objective truth and right and above all of [humanity]. His [or her] aims then not simply to “prevail” or to prove that he [or she] is right and the adversary wrong, or to make the adversary give in and yield what is demanded (Faith and Violence, 14).

His Holiness Pope Benedict XVI has recognized the just and deliberate aspirations of all Cubans. Also that since politics should fundamentally be a moral enterprise, the Pope recognizes that the Church has something to say about politics. His Holiness has stated that Marxist ideology does not correspond to reality and Cuba needs a different model. Furthermore that "armed with peace, forgiveness and understanding" Cubans may strive to achieve a better and more open society. The "arms" he outlined in his homily are the weapons of nonviolent civic action.

What went unmentioned was that the dialogue initiated by Blessed John Paul II in 1998 with the Cuban dictatorship must include the Cuban democratic opposition if the Church is to play a role as mediator between the different sides in this long running conflict.

In the short run this may not serve the Church's own interests due to the regime's violent anti-christian history but it would serve the common good. This is the underlying reason as to the importance of His Holiness Pope Benedict XVI recognizing and meeting with the democratic Cuban opposition.