Cuba's longest and most damaging hurricane

"Remember that no political programme can stand without the constructive programme." - Mohandas Gandhi 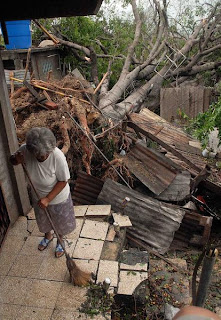 Hurricane Sandy made landfall around 1:00am at a point close to Marverde beach in Stgo de Cuba province and left the Cuban national territory around 5:00am exiting out of Cabo Lucrecia in Holguin province on October 25, 2012. At least 11 people were killed in Eastern Cuba and the property destruction was vast.

Cuban civil society has stepped up to report on the damage done and to offer concrete proposals at addressing the destruction and the rebuilding. At the same time the dictatorship continues to harass them.

The amount of destruction wreaked by Hurricane Sandy in Cuba is only possible because of the steady damage done by Hurricane Castro over the past 53 years to the island's infrastructure. Despite the infusion of billions of dollars in Soviet aide through the 1980s and now billions in aide from Venezuela the deterioration of Cuba's buildings, roads and bridges have remained in constant decline over the past five decades. The Cuban healthcare system has also been in decline since the end of the Soviet Union. Although in many circles the myth still endures despite the squalid reality.

Now reports have emerged that Cholera, a scourge not seen in decades is back. Combined with Dengue fever the recovery from Hurricane Sandy will not be an easy process and with the continued presence of the Castro regime more difficult still for the Cuban populace.

An obvious question arises: where have the billions gone? As of June 2012 Fidel Castro was worth an estimated $900 million dollars. It would be interesting to find out what his entire family is worth. For example in the case of the current Chinese premier, Wen Jiabao, his family is worth 2.7 billion dollars.

It would be fair to say that Cuba's longest and most damaging hurricane has been Hurricane Castro.

Nevertheless, in times of crisis solidarity is a must and over the past half century Cuban exiles have been the main source of humanitarian assistance to Cuba.

The Santiago section of the Municipalities of Cuba in Exile located at 845 SW 14 Avenue Miami, FL is requesting donations of canned foods, medicines and other items for the victims of Hurricane Sandy. This location will be open from 8:00am to 6:00pm EST to collect assistance for the hurricane victims. They have announced that they will not accept clothes.