"Now this is not the end. It is not even the beginning of the end. but it is, perhaps, the end of the beginning." - Winston Churchill 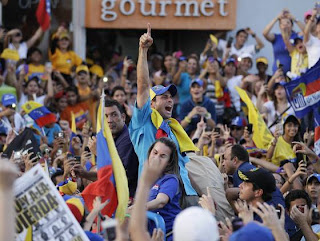 Watching the news and the twitter stream with reports out of Venezuela on the contested presidential elections there brought to mind a recent presentation at the San Francisco Freedom Forum organized by the Human Rights Foundation. It is available below:


The presentation was made by William Dobson the author of the The Dictator's Learning Curve. The wave of democratic revolutions in the 1980s and 1990s and democracy promotion became a cottage industry demonstrated that it is a difficult time for dictators but nevertheless the past five years have seen a sustained decline in freedom around the world. Dobson in his book set out to travel around the world to some of the least free countries and ask the question why this was happening and the book The Dictator's Learning Curve is the end result.

Dictators are now learning how to navigate in the modern technological world in which information cannot be contained but now has to be managed. Hugo Chavez in Venezuela, although a disciple of Fidel Castro, has not been able to follow the blunt path of his mentor to maintain power.

Dobson discusses how laws are broadly drafted and as a Venezuelan activist told him applied by Hugo Chavez in Venezuela: "For my friends everything for my enemies the law."

Unlike Cuba in Venezuela opposition parties are legal and although greatly restricted, harassed and persecuted there is a legally recognized independent media. Finally, unlike Cuba, where "elections" for the dictatorship win 99% of the vote in Venezuela, as in Russia, there has to be an appearance of competitiveness. There is no value in winning 99% the only election that has value is the one that appears competitive. Dobson says that 70% is the new 99% although Putin "won" with 63% and now Chavez with 54%. Today's modern dictator understands that facing outside pressures the regime has to learn and adapt with new techniques, strategies, and formulas to hang on to power.

That also means that for democrats to succeed that they must also learn to adapt to the new tactics and strategies of the regime in order to learn how to overcome them. Winning the vote in Venezuela is not enough. Having an opposition structure in place to ensure that the vote and count is fair along with the capability to mobilize large numbers of people into a coherent strategy to ensure that the election results are recognized and that the election be seen not as the end of a dictatorship but as the beginning of a process of democratic transition.

Venezuela is not a democracy. Power has been concentrated for more than a decade into the hands of Hugo Chavez, his political party and Cuban handlers. The judiciary and the Congress were subordinated to Hugo Chavez. What you have had in Venezuela today is a contested elections in a non-democratic country. If Capriles is able to take power then the hard work begins to rebuild Venezuelan democracy and if Chavez is victorious the struggle to begin a democratic transition continues.
Posted by John Suarez at 10:20 PM