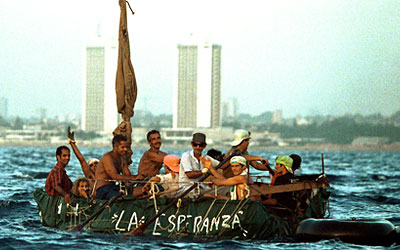 Reuters has published a misleading article describing the Cuban Refugee Adjustment Act as a "perk" despite the fact that Cuba remains the only nation in the Western Hemisphere in which its citizenry is not free to enter and exit their own country.

This is the fundamental reason why the Cuban Adjustment Act was originally enacted on November 2, 1966 and remains relevant and needed today.

Despite the newest regulations, the fact remains that the granting, now of passports [instead of the hated white card], remains arbitrary in addition to restricting entire groups of people that are considered "assets" of the government.

At the same time it would be important to identify those who are regime elites or state security agents seeking to advance the dictatorship's totalitarian agenda abroad.  The Clinton Administration's 1995 Immigration Accord with the Castro government and the lottery it generated which was controlled by the regime in Cuba has meant that regime agents and elites have been able to abuse the process. At the same time actual Cuban refugees have been deported back to Cuba and prison under the infamous wet foot, dry foot policy that sought to subvert the spirit of the 1966 Law.

Carl McGill offered a succinct explanation as to the immorality of the 1995 Accord stating:

This needs to be addressed and repressive communist party members barred from entering the United States, but the 1966 Cuban Adjustment Act needs to be maintained and restored so that refugees are no longer returned to their oppressor until Cubans are finally free to enter and exit their own homeland.

This systematic denial of a basic human right to all Cubans is the reason why the Cuban Adjustment Act is not a "perk" but the response of the United States of America to a situation that effectively makes all Cubans leaving the island without permission, a political refugee. In the case of athletes, and others considered of strategic value - deciding to remain abroad - is considered an act of treason and the Cuban in question, a defector. Baseball players suspected of wanting to leave were banned from playing the sport in Cuba.