Remember that thou art dust, and to dust thou shalt return. - Genesis 3:19 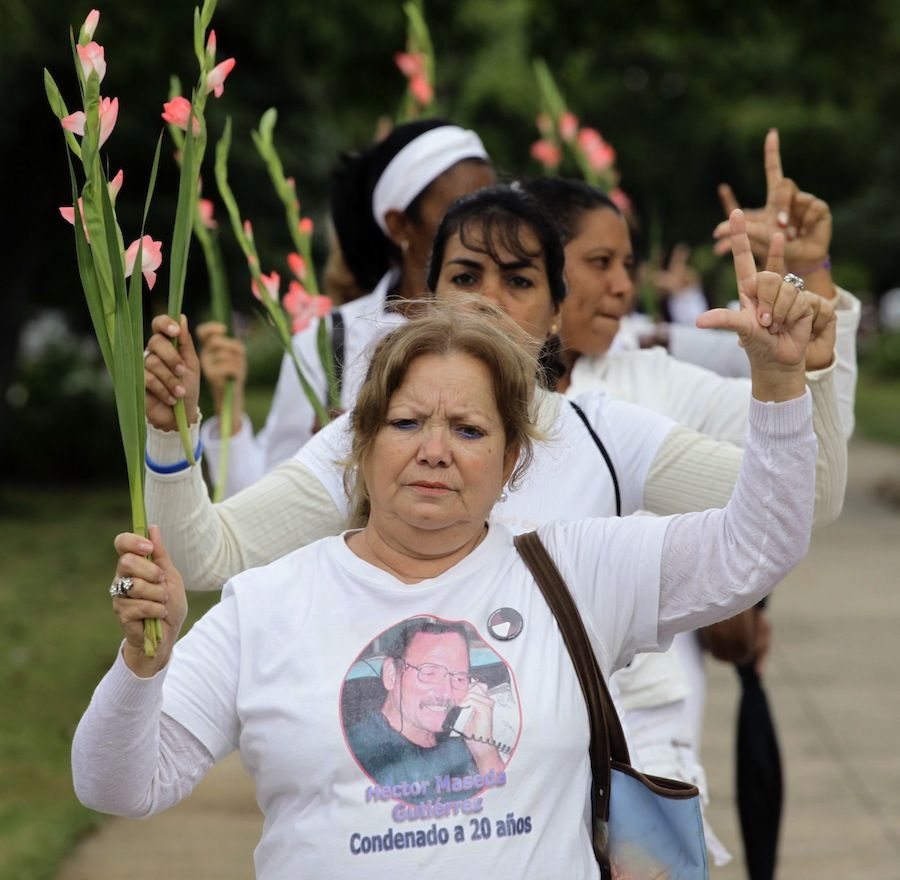 Ladies in White gathered in Havana on Calle Neptuno at the headquarters of their organization in order to observe the 65th anniversary of the birth of one of its founders,  Laura Inés Pollán Toledo who died under suspicious circumstances on October 14, 2011.

Today, was also Ash Wednesday, the first day of Lent,which  also underscores human mortality and the beginning of a period of fasting and repentance.

It was also a day in which the dictatorship mobilized its political police and state security apparatus in an effort to block, repress, beat up, and humiliate women attempting to reach Laura's home which is now the headquarters of the Ladies in White.

Sara Marta Fonseca, who appears in the photo above, directly behind Laura, on one of the walks of the Ladies in White tweeted how she was mistreated, roughed up and  beaten as she tried to attend the Literary Tea on Neptune Street to honor Laura's memory today:

Around the world human rights defenders remembered Laura Inés Pollán Toledo on the anniversary of her birth. The Human Rights Foundation tweeted in Spanish "Today is the 65th birthday of Laura Pollan see the interviews granted to HRF in 2010" and posted them in their twitter stream.


Yoani Sanchez over twitter described the atmosphere on Neptuno Street as a "tense situation throughout the day around the Ladies in White headquarters with a great police cordon and numerous arrests."

The home was surrounded by political police, state security agents and rapid response brigades. Women were threatened, detained, beaten up and dragged away told not to go to pay homage to the late Laura Pollán on the anniversary of her birth or accompany her daughter Laurita and husband Hector Maseda on this difficult day.

The tally at the end of the day tweeted by Angel Moya summed it up succinctly an hour ago: "Ladies in White homage for Laura Pollan ends in Havana, results 50 Ladies in White from different provinces present while 36 were arrested."

The dictatorship in Cuba thought when they arrested 75 activists 10 years ago on March 18, 2003 and sentenced them to long and unjust prison terms in show trials that they had crushed the opposition.  Instead Laura Pollan and the Ladies in White who had previously not been politically active mobilized to free their unjustly imprisoned loved ones. Over time what had been a narrow campaign to release their family members became a broader cause to free all of Cuba's political prisoners.

Laura and the Ladies in White were first tested with brutal force by the regime's state security apparatus. Broken bones, and bloodied by rapid response brigades did not silence or detain these women. The release of all of their loved ones after the brute force failed to break them did not lead them to end their cause.

Finally, the violence returned and a mysterious illness followed by medical neglect lead to Laura's death on October 14, 2011 but the Ladies in White continue to march for human rights and freedom.

Tyrants may study how other freedom movements succeeded in overthrowing their allies of yesteryear and they may murder the Vaclav Havels and Corazon Aquinos of Cuba but what they fail to learn is that as long as a people are enslaved they will struggle to be free.

Furthermore, despots fail to understand that our time here on Earth is short and we must make the best of it. One way to engage in a worthwhile existence is to spend it resisting tyranny and struggling for justice. Laura Pollán demonstrated this throughout her life and her memory is and will continue to be honored precisely because of that struggle to make Cuba and the world a better place. Human beings come from dust and will end up as dust, but human actions will determine what will become of human souls.