Geneva Summit for Human Rights and Democracy: What remained unsaid…

If one is the last speaker at the end of a long day of panels, and speeches followed by question and answer sessions then the need to balance the desire to relay information with that of not exhausting the patience of the audience becomes a challenge. In this exercise painful sacrifices of content are made but with the world of blogging it is no longer lost on a note pad. 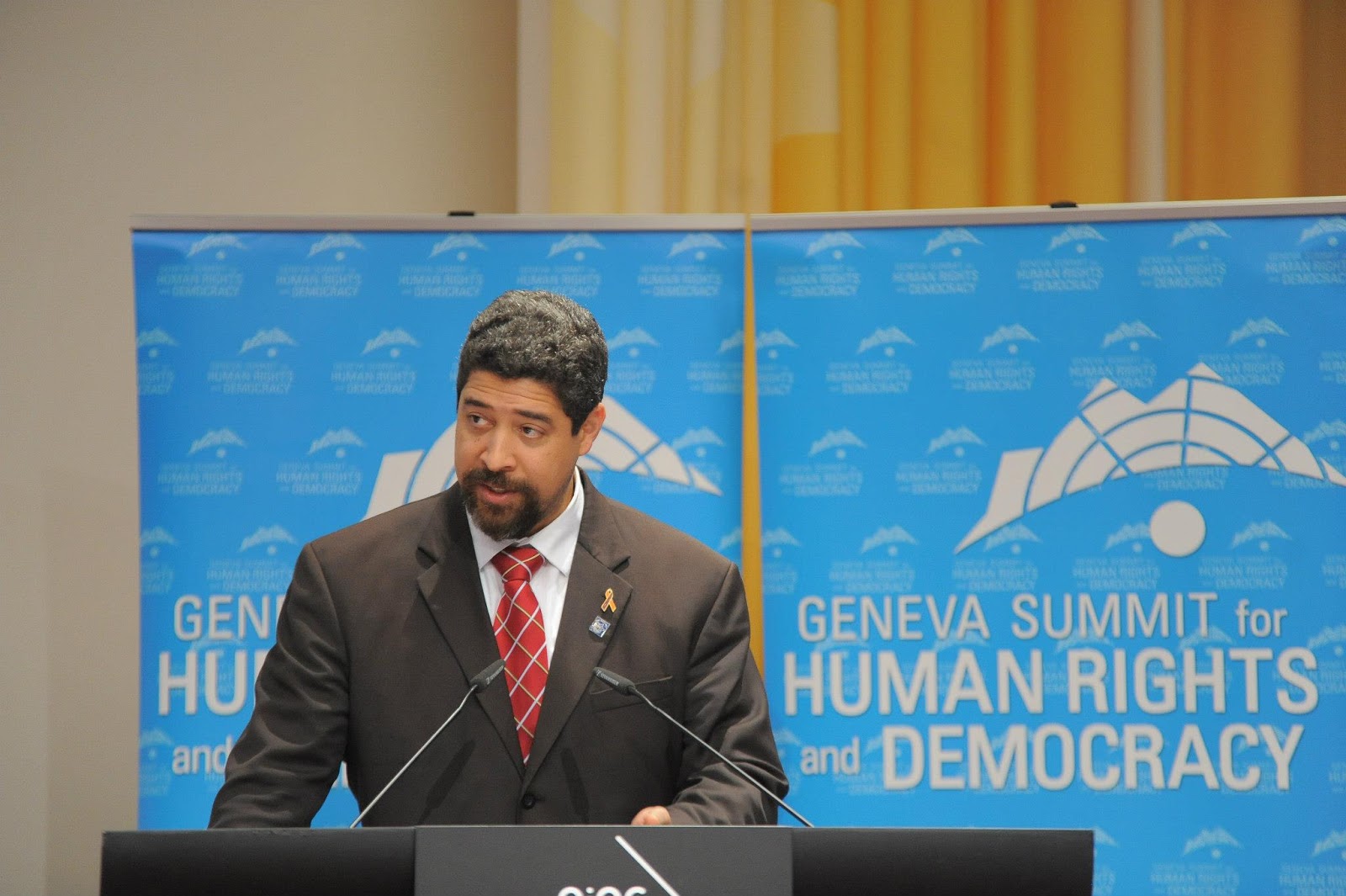 Below are some observations that were not included in the closing statement of the Geneva Summit. Their omission is due solely to the desire to keep the remarks at less than eight minutes. To achieve this half the original content was cut. Otherwise it would have been a 20-minute long presentation. The odds and ends have been refashioned into the essay below.

One objective of the Geneva Summit over the past five years has been to give voice to victims of the world’s worst human rights abuses and in bearing witness hold the perpetrators of such atrocities accountable. If not today in a court of justice then tomorrow in the court of history with the facts and evidence documented for posterity. The program throughout the day has made its contribution to this ambitious and just goal.

It seems providential that Rosa Maria Payá and Regis Iglesias Ramirez would be addressing a gathering that in the recent past had been co-chaired by both Vaclav Havel and Lech Walesa. Two men that had a profound influence on the life of Oswaldo Payá Sardiñas and who considered the Cuban human rights defender a friend.

Lech Walesa had been exchanging letters with Oswaldo since the late 1980s and the Christian Liberation Movement was greatly influenced by the Polish Solidarity movement. Vaclav Havel, the Czech playwright and dissident who helped usher in the Velvet Revolution in his country engaged Oswaldo in a dialogue of letters and along with Lech Walesa and others had a role in seeing that the Cuban dissident leader win the European Union’s Sakharov Freedom of Thought Prize in 2002 and his later nomination for the Nobel Peace Prize. Thanks to the solidarity and pressure of world leaders, such as Vaclav Havel and Jose Maria Aznar, that Oswaldo Payá Sardiñas was able to travel to Strasbourg to receive the Sakharov Prize in December of 2002.

Sadly, Vaclav Havel is no longer with us. He passed away on December 18, 2011, but his contributions and good works live on. Today in the Czech Republic activists, intellectuals and politicians still gather to reflect on and discuss challenges facing humanity today seeking solutions at the Forum 2000. His physical presence may be gone but his words live on. For example in his 1978 essay The Power of the Powerless he made the following observation that was being echoed today by many gathered here:


"When I speak of living within the truth, I naturally do not have in mind only products of conceptual thought, such as a protest or a letter written by a group of intellectuals. It can be any means by which a person or a group revolts against manipulation: anything from a letter by intellectuals to a workers' strike, from a rock concert to a student demonstration, from refusing to vote in the farcical elections to making an open speech at some official congress, or even a hunger strike, for instance."

The exercise of moral conscience in the sphere of concrete action or inaction as circumstances may demand is a necessary good in scarce supply in today’s world. That today, here at the Geneva Summit for Human Rights and Democracy, Oswaldo’s daughter, Rosa Maria, and his right hand man Regis Iglesias are demanding justice and concrete solidarity for this martyred Cuban human rights defender is Havel’s Power of the Powerless in action.

Lech Walesa, who thankfully is still with us, has spoken out on the death of his comrade in nonviolence:


“No words can express the pain I felt when I learned of the sudden death of one of the leading democratic activists, the founder of the Christian Liberation Movement, Oswaldo Payá Sardiñas - my friend. … “Oswaldo Payá will remain in my memory as a man of courage, determination and extraordinary fighting spirit. He was one of the most important voices of freedom in Cuba - and therefore incessantly spoke of the need to initiate political and economic reforms and to recognize the general human rights of every person.”

The Solidarity leader and former president of Poland on July 31, 2012 joined the cause of learning the truth about what happened in Bayamo, Cuba when Oswaldo Payá and Harold Cepero were taken from this world in a letter in which he stated:


“It's hard to calm the pain and be resigned to the loss of a loved one. It is difficult to understand the meaning of this suffering, when the family is denied the truth about the circumstances of the death of someone close. The lack of official information, the denial of contact with the participants of the accident, raises questions about the version of events presented in the mass media in Cuba. That is why I am supporting your efforts and those of the MCL for an open transparent investigation and to convene an international commission to investigate the circumstances of the accident.”

The past three years have been difficult ones for human rights defenders in Cuba. We heard today about Oswaldo Payá and Harold Cepero but also in 2012 there was Wilman Villar Mendoza, and in 2011 Laura Pollan and Juan Wilfredo Soto Garcia, and in 2010 Orlando Zapata Tamayo. Hopefully the human rights bureaucracy at the United Nations and the countries involved in this year’s peer review of Cuba will ask the regime’s representatives about these victims. Unfortunately, all too often even people of good will in order to avoid an inconvenient situation avoid asking the tough questions.

Vaclav Havel on October 12, 2009 at the Forum 2000 Conference he had organized spoke out on the dangers of small lapses of principle and cited President Obama as an example:


I believe that when the new Laureate of the Nobel Peace Prize postpones receiving the Dalai Lama until after he has accomplished his visit to China, he makes a small compromise, a compromise which actually has some logic to it. However, there arises a question as to whether those large, serious compromises do not have their origin and roots in precisely these tiny and very often more or less logical compromises.

The choice that each and every one of us faces today is the choice of living an integrated life within the truth backing it up with action or passively accepting the lie propagated by those in power. It may not serve one’s self-interest and it may not seem logical in the world of Machiavellian political power calculations, but it is necessary if human civilization is not only to survive but thrive.

“We wish to express our solidarity with all those who suffer from any form of oppression and injustice, and with those in the world who have been silenced or marginalized.” - Oswaldo Payá, December 17, 2002
Posted by John Suarez at 10:01 PM