'What is the use of discussing a man's abstract right to food or to medicine? The question is upon the method of procuring and administering them. In this deliberation I shall always advise to call in the aid of the farmer and the physician, rather than the professor." - Edmund Burke, Reflections on the Revolution in France (1790)


Back on May 24, 2013 Joel R. Pruce, a Post Doc in Human Rights Studies at the University of Dayton, made a remarkable claim: "Either you are for a liberal conception of universal human rights, or you're politically conservative. Can't be both." This led to a blog post on May 25, 2013 titled: A Conservative Conception of Human Rights where I outlined the important role of a profoundly conservative institution, the Catholic Church in the shaping of human rights discourse, early debates on the universal nature of human rights and its impact on the drafting of the Universal Declaration of Human Rights.

Joel was kind enough to retweet my dissenting reply to his tweets and thanked me for the thought I'd put into the subject and in the spirit of dialogue raised some issues with my line of argument and we both agreed on the desirability of dialogue. Below are the points raised and you can click on the image to refer to his text: 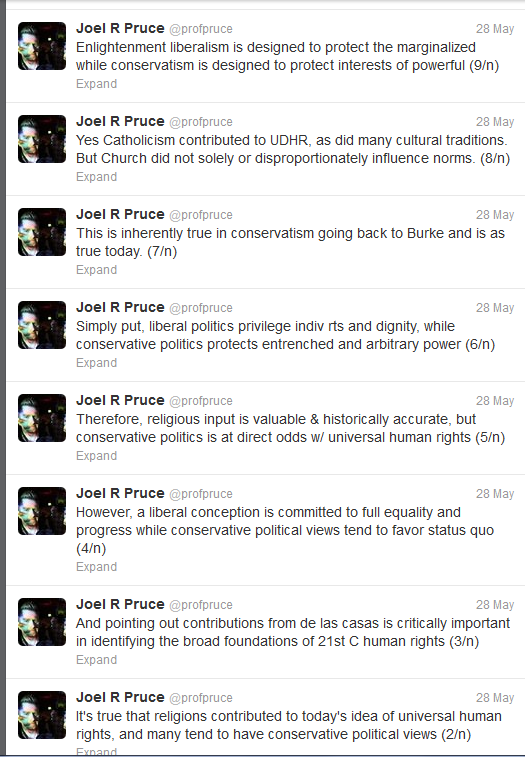 Unfortunately, the ongoing crackdown in Turkey, unrest in Venezuela, repression in Cuba and today's observance of the June 4, 1989 Tiananmen Square massacre and other matters kept me from responding until now.

The core of his argument is that liberalism is committed to full equality and "liberal politics privilege individual rights and dignity while conservative politics protects entrenched and arbitrary power" stating: "This is inherently true in conservatism going back to Burke and is as true today." Joel concludes that "Enlightenment liberalism is designed to protect the marginalized while conservatism is designed to protect interests of the powerful."

My argument is that his position is half true. Enlightenment liberalism is committed to full equality, individual rights, dignity and has a discourse to protect the marginalized. All of that is true and is backed up in the historical record. An excellent example of a document that is a pure product of enlightenment liberalism is "The Declaration of the Rights of Man and of the Citizen," also known as the "Declaration of Human and Civic Rights" adopted on August 26, 1789 and is a product of the French Revolution as is the even more egalitarian document produced in 1793 the Declaration of the Rights of Man and Citizen from the Constitution of Year I. Article 1 of the 1789 declaration reads:
"Men are born and remain free and equal in rights. Social distinctions may be founded only upon the general good."

Edmund Burke was a life-long champion against "entrenched and arbitrary power" and this brought him into conflict at critical times with enlightenment liberalism. Ten years prior to the French Revolution he was the prosecutor who sought to impeach the Governor General of India Warren Hastings for mismanagement, personal corruption and mistreatment of the Indians under his charge. On February 15, 1788, Edmund Burke opened with a speech which is excerpted below:


My Lords, the East India Company have not arbitrary power to give him; the King has no arbitrary power to give him; your Lordships have not; nor the Commons, nor the whole Legislature. We have no arbitrary power to give, because arbitrary power is a thing which neither any man can hold nor any man can give. No man can lawfully govern himself according to his own will; much less can one person be governed by the will of another. We are all born in subjection—all born equally, high and low, governors and governed, in subjection to one great, immutable, pre-existent law, prior to all our devices and prior to all our contrivances, paramount to all our ideas and all our sensations, antecedent to our very existence, by which we are knit and connected in the eternal frame of the universe, out of which we cannot stir.

Edmund Burke was a pioneer in the trial against Hastings of the idea that people of different races should not be exploited and of the need for accountability. It was not the first time Burke spoke out against arbitrary rule in his March 22, 1775 speech on conciliation with America he explained to the British government that the way to keep the allegiance of the colonies was to maintain the identification with civil rights associated with colonial rule warning that if that relation were broken it would lead to dissolution.


Let the colonies always keep the idea of their civil rights associated with your government-they will cling and grapple to you, and no force under heaven will be of power to tear them from their allegiance. But let it be once understood that your government may be one thing and their privileges another, that these two things may exist without any mutual relation - the cement is gone, the cohesion is loosened, and everything hastens to decay and dissolution. As long as you have the wisdom to keep the sovereign authority of this country as the sanctuary of liberty, the sacred temple consecrated to our common faith, wherever the chosen race and sons of England worship freedom, they will turn their faces towards you.

Edmund Burke's concept of human dignity as derived from the creator combined with a concept of man's moral equality has deep roots in the Christian tradition which incidentally is where the very language and concept of human rights first emerged in the 1200s in the Catholic Church and was refined by Thomas Aquinas.  Edmund Burke's defense of the marginalized, the colonized, and the conquered was rooted not in abstract enlightenment theory but a Christian moral vision of the universe. According to Burke, in his 1796 Letters on a regicide peace ,man has freedom but it is not absolute:


As to the right of men to act anywhere according to their pleasure, without any moral tie, no such right exists. Men are never in a state of total independence of each other. It is not the condition of our nature: nor is it conceivable how any man can pursue a considerable course of action without its having some effect upon others; or, of course, without producing some degree of responsibility for his conduct.


Enlightenment liberalism constructed abstract models that failed to take into account the full complexity of human nature and its contradictions. The French human rights charter declares men absolutely both free and equal. Edmund Burke and modern conservatives believe that "full equality" outside of the moral and spiritual sphere is unattainable and a dangerous fiction. First, to permit absolute freedom is to tolerate profound inequalities because people if left to their own devices develop hierarchies. Secondly, to enforce absolute equality requires an all powerful state to repress natural inequalities. The end result is not absolute equality but a small group with great power at its disposal making slaves of the majority. This is what happened in the French Revolution and reached its apex with Maximilien Robespierre, in 1794 with an observation that he applied in governance: "The government in a revolution is the despotism of liberty against tyranny." It is a contradiction in the same way that combining absolute freedom and equality as revolutionary goals are in contradiction and doomed to failure. Robespierre was only applying the logic of enlightenment thinker Jean Jacques Rousseau's who spoke of "forcing men to be free."

The trouble with Enlightenment Liberalism and Human Rights


Edmund Burke was one of the few who foresaw as early as 1790 in Reflections on the Revolution in France, less than a year into the French Revolution, where it would lead how the follies of enlightenment liberalism and its abstractions would result in wholesale slaughter, tyranny and eventually a dictatorship.

The French Revolution born of enlightenment liberalism, and a rejection of the Ancien Régime and the Catholic Church, gave Europe its first modern genocide of peasants in which men, women, and children were systematically exterminated, The Vendee, and the end result was the rise of Napoleon and a world war that took three million lives.

Furthermore compare two countries that are side by side Canada and the United States. The first stayed within the British empire under the monarchy and the second had its own liberal revolution against the British monarchy and established its independence on July 4, 1776. In which country were native Americans better treated? In which country was slavery ended first with a minimum of blood shed? In the United States, it was the founder of the modern Democratic party, Andrew Jackson, who ignored Supreme court decisions favoring Native Americans and who engaged in ethnic cleansing with the trail of tears. Canada, still a British colony, ended slavery on August 1, 1834 by an act of the British parliament. The United States, a liberal democracy, did not end slavery until after a bloody civil war on December 6, 1865 nearly thirty years after the Canadians. The more conservative society, the one that avoided revolution, and preserved its conservative order also happens to have the better human rights record. "The proof is in the pudding" as the British would say.

There are conservative threads that run through American history, but they are not as strong as in Great Britain or other countries, but one of the great American conservatives of the 20th Century, Russell Kirk understood the legacy of the French Enlightenment:

“Rousseau and his disciples were resolved to force men to be free; in most of the world, they triumphed; men are set free from family, church, town, class, guild; yet they wear, instead, the chains of the state, and they expire of ennui or stifling loneliness.”

Conservatives embrace authentic human rights, but also understand that the expansion of new imagined rights can lead to the dissolution of fundamental human rights and tyranny. Its happened before and can happen again. For example, the Peoples Republic of China accused the United States of "prejudice" after the State Department called for accountability on the slaughter that occurred in China on June 4, 1989.

In Cuba the same dictatorship that persecuted homosexuals sending them to labor camps in the 1960s and 1970s now uses the gay rights discourse by placing homosexuals and transgendered Cubans in the rubber stamp Peoples National Assembly and the dictator's privileged daughter traveling the world speaking out for gay rights and organizing marches in Cuba, but  they are killing nonviolent activists  and getting away with it.

Does secularization lead to loss of human dignity

Finally, the secularization of society and the loss of a belief in God may have an impact on the sacredness of human dignity when nothing is considered sacred, everything is permissible. An authentic conservative vision of human rights should not only serve to understand but advance a principled policy that defends and protects human rights and dignity.

The crisis in the political culture of the United States is that there is a very weak conservative tradition in a country that is fundamentally liberal. Democrats are modern liberals and Republicans are classical liberals. Conservatives and monarchists are few and far between.
Posted by John Suarez at 11:00 PM