June 4, 1989 Beijing Massacre: Tiananmen Mothers on the past 24 years

"Can it be true that Chinese people's lives are so worthless? There have been 80 million compatriots killed since the People’s Republic was established in 1949" - Tiananmen Mothers 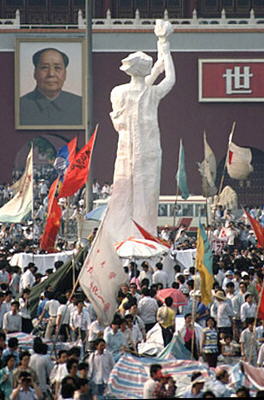 The title of our February 28, 2013 open letter to the Two Congresses (the 12th Session of the National People’s Congress and the Chinese People’s Political Consultative Conference) was “This is a Wish—May It Not Turn into Despair Again.” It represented the positive hope of the survivors and the family members of the victims of June Fourth. It has only been three months since this phrase was written, but our hope is fading and despair is drawing near.

Nowadays, Chinese society is permeated with a general sense of despair. Some commentators have pointed out: since this society already lacks trust, who can we rely on? We don’t believe our leaders, and we have little trust in their words. We don’t believe business associations. We also don’t believe newspapers. All kinds of things are said on the Internet, and we don’t know who to believe. We feel the same when it comes to intellectuals. The end result is a country with a widespread loss of trust. Professor He Weifang once said: “For a country that has come this far, letting its citizens have such a feeling of despair is really too terrible.”

Facts have clearly shown that during the past nearly quarter century, China's top leaders have never been real political reformers. Jiang Zemin was not, Hu Jintao was not, nor is Xi Jinping, who just took office. They come one after another, as if through a revolving door; and as they move forward, they become ever more distant and outrageous, causing a universal feeling of despair to descend on the people from all sides. Ever since Xi Jinping expressed the “Two Irrefutables”1 after the 18th Party Congress, we have not seen him reflect upon or show remorse in the slightest for the sins committed during the three decades of Maoist communism. We also have not seen him criticize in the slightest or make anyone accountable for the three decades of Deng-style "lame reform." What we see, precisely, are giant steps backwards towards Maoist orthodoxy. Xi has mixed together the things that were most unpopular and most in need of repudiation in these two 30-year time spans, and requires people to regard them as fundamental, guiding principles. This has caused those individuals who originally harbored hopes in him in carrying out political reform to fall into sudden disappointment and despair.

To say anything more now is superfluous. In a few days, it will be the 24th anniversary of the June Fourth tragedy. During this long 24-year period, we, the Tiananmen Mothers, have written 36 successive open letters to the Two Congresses and Chinese leaders since 1995, along with announcements and eulogies. To this day, all our efforts have been in vain, we have received not a single response from the government.

In 1995, we proposed the following to the deputies of the Two Congresses: reinvestigate June Fourth and publicly announce the number of the deceased and their names; provide to the families of the deceased an explanation and compensation for each death in accordance with the law; and investigate and prosecute those criminally responsible for the June Fourth tragedy (i.e. truth, compensation, accountability). These three appeals have never received any reply.

On the tenth anniversary of June Fourth, we submitted a legal petition to the Supreme People's Procuratorate, accusing [former premier] Li Peng as one of the main culprits of the June Fourth massacre, and of having committed crimes against humanity, and requesting an investigation into his legal responsibility. This petition was ignored.

That same year, we formed a dialogue group of 20 people and proposed a sincere and equal dialogue with government leaders to discuss questions about June Fourth victims. This request was also ignored.


Even if we don’t have anything to our names, even if we are not able to accomplish very much, we still have that motherly love. … [W]e see this love as a type of responsibility. With this quality, we hope we can appeal to the conscience of the people, dispelling hatred and distrust among people, and changing the misunderstanding that still lingers in our minds about the value of life and of individual people. We believe this great love stems from the source of life. The responsibility it confers on us makes us stronger and wiser. It will turn our world into a better and more humane place where we can bring violence and killing to an end. . . . The unfortunate Chinese people have shed too many tears, piled up too many regrets. We have a responsibility to contribute our efforts towards ending this miserable history.

The government authorities were surprisingly indifferent to and apparently unmoved by our solemn and heartfelt statement.

In 2006, we made a limited compromise on the issue of the reassessment of June Fourth, offering to use the principle of tackling the simpler problems first. On issues with major differences of opinion on which we could not reach consensus quickly—for example, how to determine the nature of the June Fourth incident—we would temporarily set aside our disagreements. Instead, we would first solve the issues that involve the basic rights of the victims and their personal interests. But the government still has not replied to our suggestion.

Since then, we have repeatedly suggested the idea of using dialogue to replace confrontation, pointing out that if we are able to use dialogue to replace confrontation, it would benefit the whole country and be a blessing for all our people. The more dialogue we have, the more civility and law and order, and the less ignorance and tyranny. Dialogue leads society not toward confrontation or hatred, but toward tolerance and reconciliation. We also raised the proposal that the problem of June Fourth should be dealt with by the rule of law—that is, use law to solve political issues. The government authorities have never responded to the above proposals; they have pretended not to hear.

During these long 24 years, we Tiananmen Mothers have suffered profoundly. We have moaned in hell-like darkness, struggled in tears which nearly dried up. We have also been overwhelmed by fear and despair and engulfed by rumors and apathy. We have campaigned year after year, tried to get back justice for the dead year after year. The government authorities, however, have remained unmoved. All the hopes we have cherished are gradually leaving us, and despair is increasingly drawing near. Is that what Mr. Xi Jinping, our country’s current leader, really tries to tell us, the relatives of the June Fourth victims?!

The evidence of the June Fourth massacre which was launched by Deng Xiaoping, Li Peng, and others on June 3-6, 1989, is incontrovertible. During the past 24 years, we have documented 202 individuals who died in the June Fourth massacre. But this number is only the tip of the iceberg. There are many more who died during June Fourth—we believe the figure of 2,600 to 3,000 disclosed by the Chinese Red Cross not long after the massacre—who have remained unknown to this day.

Can it be true that Chinese people's lives are so worthless? There have been 80 million compatriots killed since the People’s Republic was established in 1949—a crime of enormous proportion committed by Mao and the evil consequence of Maoist socialism. But Mr. Xi Jinping, the country’s current leader, went so far as to say: "If Comrade Mao Zedong was refuted totally, can our party still stand firm? Can our country’s socialist system still stand firm? They can’t. If that is the case, there will be chaos.” This is so strange. It appears that Mr. Xi Jinping categorically does not care about the tens of millions of lives of his fellow countrymen. Instead, he would rather keep Mao, Maoism, and socialism with Chinese characteristics.

People will find a way out when they are in a dire strait. As [historian] Sima Qian said in Records [quoting Sun Zi]: “Place your army in deadly peril and it will survive; plunge it into desperate straits and it will come off in safety.” We believe in this saying thoroughly.

At the end of the recently televised drama, "The Orphan of Zhao," there was a dialogue between Cheng Ying and Tu Angu over drinks:


Cheng Ying: That is just a 19-year-old boy. How can he threaten your strong position?


Tu Angu: Then I’m curious. Who would you say can put me in a fatal position!


Cheng Ying: Your Excellency, the person that can put you in a fatal position is his Excellency Zhao Shuo. Over the past 19 years, people could always be seen on a certain day each year mourning his Excellency Zhao Shuo, and those infants killed by your order. Your Excellency, even though you arrested and killed so many people, you could not stop what people say about Zhao. It passes from person to person, and what people say to each other is spreading constantly.

Nineteen years passed, and the injustice was finally reversed. This is called finding a way out of a field of death.

Anyone who experienced the tragic history of China’s 1989 June Fourth massacre would feel the relevance of this dialogue. It is a metaphor for the people’s appeal to reassess June Fourth. Even though the authorities pretend to see and hear nothing, they just cannot ban this kind of appeal month by month, year by year. The appeal gets passed down through the Internet, media, and the people. It simply cannot be banned, suppressed, deleted, or blocked.

The Tiananmen Mothers will certainly find a way out of the field of death. We will never give up, never stop, until June Fourth is finally reassessed, and the souls of the victims rest in peace.