Free Gorki: Cuban rocker taken from his home in Havana at noon today by the police 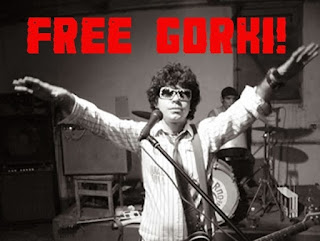 On the 21st anniversary of the August 5th freedom uprising in Havana, Cuba punk rocker Gorki Aguila is taken from his home by the police at 12 noon. He is also the author of a song dedicated to the uprising titled El Maleconazo.

Please spread the word on this courageous artist and activist. It is the best way to keep him safe and to obtain his freedom.

Update: The good news is that Gorki was freed around 4:00pm and that international press picked up the story of his detention the same day. The bad news is that he has been threatened by Cuban officials that if he continues to support the Ladies in White on Sundays and attend opposition meetings at Gandhi Park he will no longer be allowed to travel outside of Cuba. This is how State Security said it to the punk rocker: "he who invites you to visit another country will have to come to look for you in a motorboat" to smuggle him out of the country. Gorki's response to the events of today and threat issued:


"They violate all your rights one after another: the right to march peacefully, to freedom of expression, right to travel, arbitrary arrest. It is incredible all that they do in just one arrest."

Further proof that the so-called travel reform of 2013 is cosmetic and freedom of travel remains  non-existent and subject to the arbitrary whims of the dictatorship.
Posted by John Suarez at 4:13 PM