U.S. Cuba Policy: Pay attention to what they do not what they say 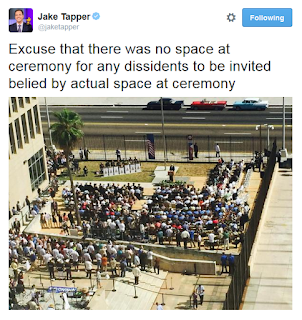 Secretary of State John Kerry said that human rights was at the top of the Cuba agenda, and that they would not give Cuba a pass on human rights but proceeded to not invite Cuban human rights defenders to the flag raising ceremony at the Embassy. The State Department argued that it was a government to government affair and that there was not enough space to accommodate the dissidents. In an interview with Andres Oppenheimer, the Secretary of State offered an expanded explanation:


“Rather than have people sitting in a chair, at a ceremony that is fundamentally government to government, with very limited space, I will meet with them...and exchange views.”

However, the State Department did accommodate "entrepreneurs and Cuban American activists" to fly down with Kerry and his official delegation with a planeload of them. The "activists" support the Obama administration's Cuba policy and are advocates of lifting sanctions on the dictatorship and some like former Congressman Joe Garcia had received financial contributions from supporters of the Castro regime in his previous campaigns that became a source of controversy and contributed to the one term congressman not being re-elected.

Furthermore, Secretary Kerry did not object to celebrating the embassy opening with Cuban spies who had been expelled from the United States under previous Administrations due to their espionage activities against the United States of America.

Despite the plane load of lobbyists and businessmen and the Cuban spies CNN anchor Jake Tapper in a tweet observed that there was plenty of space to have invited Cuban dissidents. This indicates that it was not space considerations but bending over backwards to accommodate the Castro dictatorship that led to the decision not to invite human rights defenders. This combined with the shabby treatment of Rosa María Payá last month by State Department spokesman John Kirby and the message is clear and journalist Andres Oppenheimer laid it out:


Kerry’s trip to Havana didn’t break new ground on human rights even symbolically, and in effect hurt Cuba’s fledgling internal opposition by making it look irrelevant in the eyes of many Cubans.  Could it be that Obama is so eager to visit Cuba before he finishes his term — to go down in history as the U.S. president who “opened” Cuba, much as Nixon “opened” China — that he is willing to sacrifice the human rights cause? Could it be that he is so eager for a foreign policy victory that he is willing to abandon a long-standing U.S. policy of moral support to pro-democracy activists?

The Obama administration's Cuba policy did not begin on December 17, 2014  but first enunciated in his 2009 inaugural address when the President spoke of extending a hand to old adversaries. This went beyond rhetoric in 2009 and again in 2011 with the loosening of sanctions against the Castro regime. During the past six years of the Obama administration the Castro regime has seized the opportunity to do away with opposition leaders that could have been alternatives of national leadership to the current regime while projecting itself further into Latin America.  The dictatorship understands, as did the Chinese before, that while the United States will pay lip service to human rights concerns when it comes to concrete actions this administration holds economic engagement with the dictatorship as a higher priority then human rights.

If you doubt this then just asked yourself then why there was room to fly down a plane load of business men and lobbyists for doing business with the dictatorship but no room for human rights defenders at the flag raising ceremony?  The answer is brutally simple. Business and engagement with the dictatorship in Cuba is the priority not human rights or the freedom of the Cuban people.

The lesson is clear when dealing with the Obama administration: Pay attention to what they do and not what they say.
Posted by John Suarez at 8:56 PM