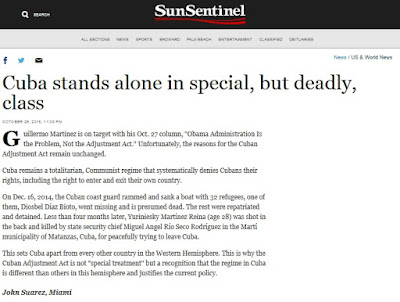 Guillermo Martinez is on target with his Oct. 27 column, "Obama Administration Is the Problem, Not the Adjustment Act." Unfortunately, the reasons for the Cuban Adjustment Act remain unchanged.
Cuba remains a totalitarian, Communist regime that systematically denies Cubans their rights, including the right to enter and exit their own country.

On Dec. 16, 2014, the Cuban coast guard rammed and sank a boat with 32 refugees, one of them, Diosbel Díaz Bioto, went missing and is presumed dead. The rest were repatriated and detained. Less than four months later, Yuriniesky Martínez Reina (age 28) was shot in the back and killed by state security chief Miguel Angel Río Seco Rodríguez in the Martí municipality of Matanzas, Cuba, for peacefully trying to leave Cuba.

This sets Cuba apart from every other country in the Western Hemisphere. This is why the Cuban Adjustment Act is not "special treatment" but a recognition that the regime in Cuba is different than others in this hemisphere and justifies the current policy.