November 9, 1989 was a great day for freedom when the Berlin Wall, a symbol of division, repression and terror was nonviolently torn down by the German people and ushered in the beginning of German reunification and the end of communist East Germany.

Between 1961 and the year it was torn down at least 136 Germans were extrajudicially executed by the East German border guards just for trying to cross the Berlin Wall to freedom. There is The Berlin Wall Museum that offers a complete listing of the 136 known victims with details about them and their deaths. One of the last victims, Chris Gueffroy was born on June 21, 1968 and shot dead on February 5, 1989 trying to cross the Berlin Wall. Murdered at 20 years of age for the crime of wanting to live in freedom.


"The Stasi's first major task abroad was in Cuba, after Fidel Castro and Vice Premier Anastas Mikoyan signed the Soviet-Cuban pact on February 13, 1960, officially placing Cuba in the Soviet bloc. As Soviet arms shipments began, Mielke sent a number of Stasi officers of General Wolf's HVA to Havana. Led by Colonel Siegfried Fiedler, they assisted in setting up what became a first-rate intelligence service and an oppressive secret police. As a result Cuba's relations with East Germany developed as closely as those with the Soviet Union. Intelligence gathered in the United States by the Cubans was routinely shared with the Stasi. Much of the information contained in the dossier the Stasi maintained on President Ronald Reagan, for example, originated with the Cubans."

Fidel Castro at the Berlin Wall
Fidel Castro's first visit to Berlin began on June 13, 1972 and at various points the Cuban dictator addressed the border guards that policed the Berlin Wall to prevent East Germans from escaping to the West. At Brandenburg gate on June 14 in the afternoon he addressed the men charged with shooting East Germans fleeing to West Germany as "the courageous and self-denying border guards of the GDR People's Army who stand guard in the front line of the entire-socialist community." Later in the evening Fidel Castro addressed the Nikolay Bezarin Barracks in East Berlin:


"It is very important to know that the people of the GDR have great confidence in you, that they are truly proud of you. The comrades of the party and the citizens of socialist Berlin have told us with great satisfaction about the activity of the border troops, speaking with great admiration for you and for your services."

Later on in the same speech the Cuban communist leader offered his take on what he saw there and prospects for the future:


"We have no doubt that a great political and revolutionary victory has been won in the GDR. You have created the foundations for the future, a truly revolutionary state, a border state to whom the future belongs. You are the new generation, which will continue this work."

Order to liquidate border breachers including women and children
The regime that hosted Fidel Castro's visit and that the Cuban dictator celebrated had given a clear Order to Border Guards on October 1, 1973 that left no doubt to their criminal nature:


"It is your duty to use your combat … skills in such a way as to overcome the cunning of the border breacher, to challenge or liquidate him in order to thwart the planned border breach... Don’t hesitate to use your weapon even when border breaches happen with women and children, which traitors have often exploited in the past.”

In 2012 reports emerged in The Frankfurter Allgemeine Zeitung (FAZ) of East German files concerning a deal for Ikea furniture to be made in Cuban prisons.  The deal was struck in September 1987, after a delegation of East Germans went to Havana for talks with the Cuban Interior Ministry. East German documents show that they also spoke with Enrique Sanchez, who headed the Cuban company Emiat – responsible for furnishing the holiday and guest homes of the Cuban political elite.  The East German files say production sites were “incorporated in the prison facilities of the Interior Ministry” in Cuba.

The Stasi's Continuing Legacy in Cuba
The East German Stasi trained the Cuban State Security service known as "G2" and one of its standard tactics was arranging car accidents. Not only in East Germany but in West Germany as well as was the case with Lutz Eigendorf an East German soccer player who defected to the West on March 20, 1979 and died in a mysterious car accident on March 5, 1983. Wolfgang Welsch a critic of the East German regime was subjected to three attempts on his life the second being a "car accident."

Like their East German counterparts, Castro's State Security has not only infiltrated dissident groups on the island but the highest levels of the United States intelligence services and State Department. The case of Ana Belen Montes and Walter Kendall Myers should serve as a warning to those that underestimate this dictatorship. The poisoning of dissidents and staged car accidents were standard tactics of the Stasi that the Cuban intelligence service made their own and continue to use to the present day. A well documented and high profile example of Cuban state security staging a fatal "car accident" are the July 22, 2012 killings of  Oswaldo Payá Sardiñas and Harold Cepero Escalante. 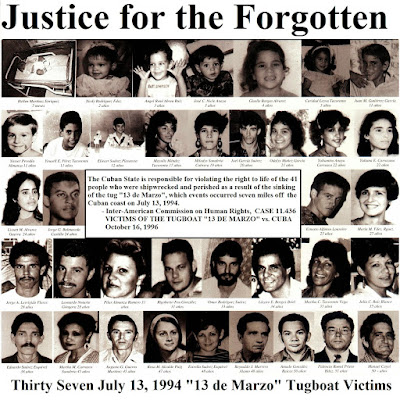 Cuba's Berlin Wall: The Florida Straits
On December 16, 2014, the Cuban coast guard rammed and sank a boat with 32 refugees, one of them, Diosbel Díaz Bioto, went missing and is presumed dead. The rest were repatriated and detained. Less than four months later, Yuriniesky Martínez Reina (age 28) was shot in the back and killed by state security chief Miguel Angel Río Seco Rodríguez in the Martí municipality of Matanzas, Cuba, for peacefully trying to leave Cuba. The Castro regime for decades has engaged in the murder of fleeing refugees. A particularly egregious, well documented, example is the July 13, 1994 "13 de Marzo" tugboat massacre in which 37 men, women and children were killed. According to academics, Juan Clark and Holly Ackerman, in their 1995 monograph The Cuban Balseros: Voyage of Uncertainty as many as 100,000 Cubans have died crossing the Florida Straits, with many of them victims of the Cuban border patrol.

The need for solidarity
Former Czech president and dissident leader Vaclav Havel, who successfully confronted a totalitarian regime using nonviolent means on the 20th anniversary of the Fall of the Berlin Wall gave an address to the European Parliament where he gave the following advice as to what free countries should do:


Above all, clear and unequivocal solidarity with all those confronted by totalitarian or authoritarian regimes wherever they are in the world. And economic or other particular interests should not hinder such solidarity. Even a minor, discreet and well-intentioned compromise can have fatal consequences– even if only in the long term, or indirectly. One must not retreat in the face of evil, because it is in the nature of evil to take advantage of every concession. Besides, Europe has already had its own unfortunate experience of appeasement policies. Our support can help open-minded people or outspoken witnesses to the situation in North Korea, Burma, Iran, Tibet, Belarus, Cuba or anywhere else, much more than we think.

The Cuban Adjustment Act according to a former Cuban prisoner of conscience is the "most comprehensive and humane act of solidarity, of the great American nation." Now is not the time to eliminate it.
Posted by John Suarez at 11:57 PM