Truth is what stands the test of experience. - Albert Einstein (1950)


Obama Cuba Policy: The third Time repeating and doubling down on failure

On December 17, 2014 President Obama made a general observation in his statement on changing U.S. Cuba policy: "I do not believe we can keep doing the same thing for over five decades and expect a different result." The president should have looked back to the previous two attempts to normalize relations with the Castro dictatorship in the 1970s and 1990s to understand that Cuba policy has not been static over the past five decades. Understanding the reasons for the policy he has sought to replace may have saved lives. 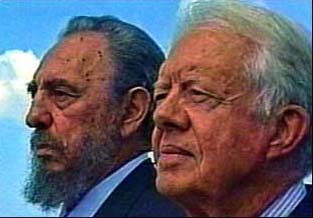 First Time
The Carter Administration was the first to lift the travel ban and hold high-level negotiations with the Cuban dictatorship, and both sides opened Interest Sections in their respective capitals between 1977 and 1981. Then from 1981 to 1982, the Castro regime executed approximately 80 prisoners, which was a marked escalation when compared to 1976. Furthermore, during the Carter presidency, Fidel Castro took steps that resulted in the violent deaths of US citizens.

During the Mariel crisis of 1980, when over 125,000 Cubans sought to flee the island, the Cuban dictator sought to save face by selectively releasing approximately 12,000 violent criminals or individuals who were mentally ill into the exodus. This first attempt at normalizing relations saw a worsening human rights situation and migration crisis. 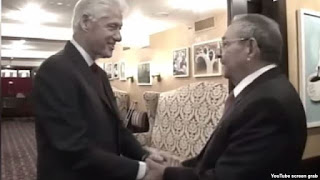 Second Time
The Clinton Administration in 1994 initiated regular contacts between the U.S. and Cuban military that included joint military exercises at the Guantanamo Naval base. Despite this improvement of relations the 1990s saw some brutal massacres of Cubans that are rightly remembered such as the July 13, 1994 "13 de Marzo" tugboat massacre and the February 24, 1996 Brothers to the Rescue shoot down. The shoot down involved two planes blown to bits over international airspace by Cuban MiGs killing three American citizens and a Cuban resident who were engaged in the search and rescue of Cuban rafters.

The worsening human rights situation was a contributing factor in the August 1994 rafter crisis in which 35,000 Cubans fled the country. Experts have identified that this was a migration crisis engineered by the Castro regime. The Cuban dictatorship did this because it successfully reasoned that it could coerce the Clinton Administration to the negotiating table to obtain concessions which indeed it did and prolonged the life of the dictatorship for another twenty years. 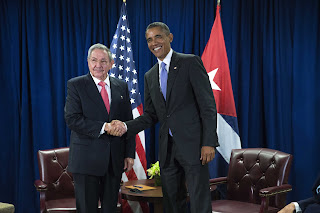 Third Time
The Obama Administration beginning in 2009 loosened sanctions on the Castro regime. On his watch concluding on December 17, 2014 the Obama administration freed all five members of the WASP spy networ, including Gerardo Hernandez -- who was serving two life sentences, one of them for conspiracy to murder four members of Brothers to the Rescue murdered during the previous attempt at normalizing relations during the Clinton Administration. They de-linked the pursuit of full diplomatic relations from the rise in human rights violations in Cuba and in the region by Cuban state security. The Obama administration has doubled down in concessions even were the Clinton administration did not ignoring the Castro regime's continuing sponsorship of terrorism and smuggling of weapons to sanctioned countries in order to take Cuba off the list of state sponsors of terrorism. President Obama is following through on his pledge made at the State of the Union to work for the lifting of economic sanctions on the dictatorship. On his watch human rights are worsening with an escalation in arbitrary detentions, violence against activists and prominent opposition leaders who would have been critical for a democratic transition killed in what appear to have been state security operations.

Once again the worsening human rights situation, and the belief that the Obama Administration can be coerced is leading to a migration crisis where tens of thousands of Cubans are fleeing the island. The objective of the dictatorship is crystal clear in exchange: end economic sanctions that protect U.S. taxpayers and limit their ability to make mischief and secondly end the Cuban adjustment Act in order to leave Cubans more firmly in the dictatorship's control without an avenue of escape.

Hopefully the price in blood and treasure expended for the third time will persuade future occupants of the White House not to make the same error. Three times that American presidents have been perceived as weak by the Castro regime have ended in mass migrations and loss of life. Three presidencies have pursued openings with the Castro regime with disastrous results in terms of U.S. interests and human rights. You can't keep doing the same thing over three presidencies and expect a different result. It is also interesting to note that under presidencies perceived as tough on foreign policy, Ronald Reagan (1981 - 1989), George H.W. Bush (1989 - 1993), and George W. Bush (2001 - 2009) did not have these type of migration crisis with the Castro regime.
Posted by John Suarez at 2:46 PM