"Terrorism and deception are weapons not of the strong but of the weak." - Mohandas Gandhi 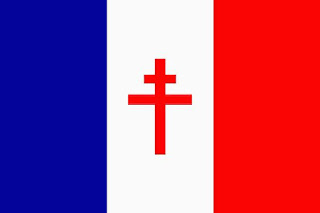 Two major terrorist attacks in Paris, France within the past eleven months. My prayers, solidarity and thoughts go out to the people of France. The flag posted above was used by Charles de Gaulle and the French Resistance during World War II. The cross of Lorraine at the center is a symbolic reference to Saint Joan of Arc.

French writer Laurent Jauffrin spoke out tonight: "French society should arm itself with enough courage not to give an inch to the killers. It has to show both vigilance and the undying will to face the horror with the force of the law and solidarity...Only our country’s unity – as it stands strong, voluntary and carried by our values – will allow France to take its greatest challenge."

I have been lucky enough first as a child, later as a young man and now in middle age to visit Paris, France on several occasions and have a love for the city and its people. This past May spent a few days there. The attacks on a Friday night when people are out and about enjoying life and each other are a barbaric outrage. These terrorist acts deeply sadden and anger me.

“La forma más noble de vengar una ofensa es no imitar a quien nos ha ofendido” ["The noblest way to avenge an insult is not to imitate he who has offended us."] I remember these words by the recently departed poet and former prisoner of conscience Jorge Manuel Valls Arango at this difficult time.

What took place tonight was an act of barbarism. In opposition to this barbarism let us celebrate a small example of French civilization found in its music.

Second, Gymnopédie No.1 completed by Erik Satie in 1888. The recording is from 1992 and performed by Daniel Varsano and Philippe Entremont.

Clair de Lune the third movement from the Suite Bergamasque by Claude Debussy from 1890. Recorded by pianist François-Joël Thiollier.

For civilization and against barbarism. Pray for Paris. Vive La France!
Posted by John Suarez at 8:27 PM