"The salvation of this human world lies nowhere else than in the human heart, in the human power to reflect, in human meekness and human responsibility."- Václav Havel IHT (21 February 1990)

It was at this event that President Havel made some profound observations that now and hindsight speak volumes at the challenges currently faced in a deteriorating international atmosphere.

At the time President Barack Obama had backed out of meeting with the Dalai Lama due to an upcoming trip to China, Vaclav Havel explained the importance of such "small compromises" on October 12, 2009 at Forum 2000:

Both Václav Havel and Oldřich Černý have passed away and are greatly missed, especially in these difficult times when moral clarity and discernment are greatly needed. The video below was made by journalist Carlos González.


At the gathering above President Havel signed a petition calling for the release of 305 Cuban political prisoners. Cuban democrats should honor and remember the dissident who became a prisoner of conscience who became a president and later a private citizen and through out this trajectory maintained his solidarity with the victims of repression around the world. On the 26th anniversary of the Velvet Revolution the legacy of Václav Havel and Oldřich Černý lives on in the free society they struggled to bring into being. 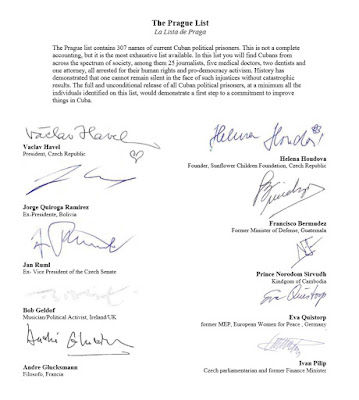