Cuban officials have a poor record on timely reporting of epidemics 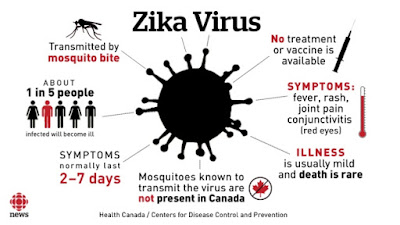 According to the August 17, 2016 Department of Defense Global Zika Surveillance Summary in the Western Hemisphere (spanning January 1, 2015 through August 13, 2016) there have been 106,246 confirmed cases of Zika with 457,894 suspected cases and 1,817 microcephaly cases. 44 countries have been impacted by Zika virus.

Brazil has borne the brunt of the outbreak reporting 78,421 cases of confirmed Zika infection and 1,749 microcephaly cases. This was followed by 8,682 cases in Colombia with 22 cases of microcephaly and Puerto Rico with 8,766 cases and one microcephaly case. The Dominican Republic has 252 cases confirmed.

Meanwhile Cuba is now reporting three confirmed cases and 30 cases brought in from abroad while having mounted a propaganda campaign in February 2016 claiming to have deployed 9,000 troops in a preventive battle against Zika reported The Guardian.

Daniel Chang of The Miami Herald reported on August 17, 2016 in the article "How Cuba is fighting Zika" in the first paragraph a claim that should raise concerns:


"After Cuba was ravaged in 1981 by an epidemic of hemorrhagic dengue fever — a mosquito-borne illness — the island nation’s communist government launched an aggressive response that created the framework for its reportedly successful fight against Zika, according to an article published Wednesday in the scientific journal Nature."

Tragically, the so-called aggressive response to dengue by 1997 involved arresting at least one doctor for enemy propaganda who correctly warned of a Dengue outbreak sentenced him to eight years in prison then forced him into exile after an international outcry.  Eventually when the bodies started to pile up and it was no longer possible to cover up the epidemic the regime admitted they had a problem.

This pattern of denial and lack of transparency was repeated with a cholera outbreak in 2012. With Zika the Castro regime can fall back on a tried and true method that it has also used to reduce infant mortality rates and that is the aggressive use of abortion, even without the mother's consent. The dictatorship will be able to cover up cases of microcephaly with abortions.

Consider that 3.5 million people visited Cuba in 2015 and tourism to the island in 2016 so far is 15 percent higher than last year. The crisis in Venezuela is impacting Cuba economically making tourism a priority source of hard income. In the past the regime has demonstrated a resistance to reporting or it has under-reported on the outbreaks of diseases in the island. The trouble is that the lack of transparency and the spread of the virus will pose a danger to tourists visiting the island who not being advised of the danger may return home as asymptomatic carriers of the virus spreading it in their country unknowingly.

According to the New York Times there are 491 cases in New York City alone, four believed to have been contracted through sex, accounting for about a quarter of all Zika cases in the United States, and the blame is being placed on the Dominican Republic and Puerto Rico, but what if Cuba is under reporting the number of infections while the number of tourists from the United States increases?

Consider for a moment that according to The Miami Herald on August 24, 2016 Florida has reported 43 local Zika infections, with almost all in Miami-Dade except for one case each in Broward and Pinellas counties and the two in Palm Beach. The entire state of Florida has reported 523 travel-related Zika cases and 70 infections involving pregnant women.

Considering all this can U.S. health officials rely on their counterparts in Havana to accurately diagnose cases of Zika and report on the Zika situation on the ground if they are caught up in a political narrative that possibly presents them with the choice of under reporting or risking prison?