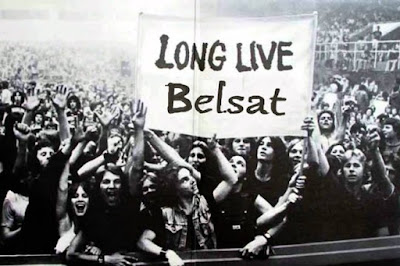 Belarus is Europe's last dictatorship and the situation in that Eastern European country is not improving. A clear example of this is found in efforts to shut down the few remaining sources of independent news. One of these last media outposts is Belsat, and its web site provides a brief history of the channel:


Belsat TV is the only Belarusian language independent television channel. It was formed in 2007 by a group of Belarusian and Polish journalists as part of Telewizja Polska S.A. ... The launching was done in cooperation with members of the Association of Belarusian Journalists – recipient of the prestigious Andrei Sakharov Human Rights Award of the European Parliament. Belsat TV broadcasts nearly 20 hours a day all year round. Its original content is prepared by more than 100 associates from all over Belarus supported by around 80 editors, managers and technicians in Warsaw.

The regime in Belarus is seeking to remove satellite dishes en masse that will coincidentally curtail viewing of Belsat TV in the country. However they may be wasting their time because international solidarity is ebbing for democrats resisting tyranny around the world, Europe is not immune from the trend, and Belsat TV may lose support from neighboring Poland that has helped to keep the channel broadcasting into Belarus.

However there are efforts underway to campaign for keeping Belsat TV on the air through social media campaigns. This blog entry is my own small contribution to that effort. Long live Belsat TV!
Posted by John Suarez at 10:33 PM