The nonviolent legacy of Stephen Biko


Anti-Apartheid leader and non-violent icon Stephen Bantu Biko was born 70 years ago today in Eastern Cape, South Africa. Steve Biko was murdered by South African security forces on September 12, 1977 in Pretoria, South Africa. He was a founder of a black consciousness movement that challenged Apartheid's white supremacy awakening and mobilizing many black South Africans. It was his nonviolent approach carried on by others that brought freedom to South Africa. His ideas concerning how oppressed peoples can resist domination remain relevant today. 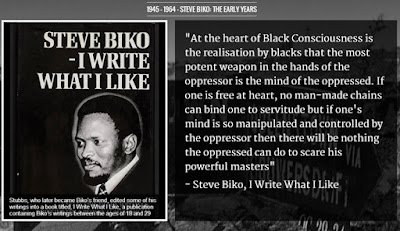 "The basic tenet of black consciousness is that the black man must reject all value systems that seek to make him a foreigner in the country of his birth and reduce his basic dignity."

"Change the way people think and things will never be the same." *I write what I like


"The system concedes nothing without demand, for it formulates its very method of operation on the basis that the ignorant will learn to know, the child will grow into an adult and therefore demands will begin to be made. It gears itself to resist demands in whatever way it sees fit."* The Quest for a True Humanity

Google that has its own issues with embracing dictators, nevertheless honored the memory of Steve Biko on its main page with a Google Doodle. However this is not a difficult thing to do when the Apartheid regime no longer exists and cannot be a potential business partner.