The White House claimed in a tweet on December 16, 2016 that they had "opened up a new chapter with the people of Cuba." There is nothing new in what the Obama administration has done in Cuba because it is a retread off the old, discredited approach of embracing dictators while focusing on narrow economic interests. Google is now partnering with ETECSA, the Castro regime's telecommunications monopoly that engages in systematic censorship. Other companies have engaged in discrimination based on national origin in the United States in order to satisfy regime demands.

Meanwhile Cubans continue to be jailed for what they think and the press has picked up on three high profile cases of a medical doctor, a lawyer and an artist. The two year anniversary of the new Cuba policy also coincided with the arrest of a U.S. citizen, Kimberley Motley, an international attorney who wanted to hold a press conference to discuss the case of Danilo Maldonado, the jailed Cuban artist.

Ben Rhodes published a blog entry claiming "two years of progress" citing progress in the private sector in Cuba but failed to mention that the Cuban military has expanded its control of the economy in the island since 2014. The White House has also been shy about mentioning the collapse in trade between U.S. companies and Cuba over the past two years. Nor does anyone want to mention that the peak year of trade was 2008, the last year of the Bush Administration. Instead the focus is on the latest celebrity visiting the island for a photo opportunity. 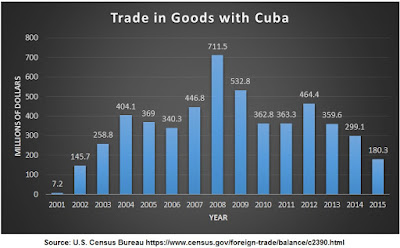 Cuba may have become a celebrity magnet over the past two years but Cubans began to flee the island in huge numbers that had not been seen since the Clinton Administration. The reason for the exodus can be seen in the dramatic increase in politically motivated arbitrary detentions in Cuba during the Obama Administration that has coincided with the Castro regime's heightened violence against Cubans who dissent. 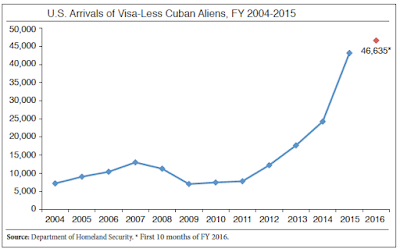 Human rights have worsened in Cuba as the dictatorship has been legitimized internationally by the Obama Administration's new Cuba policy. The consequences have gone beyond the symbolic moment of silence for Fidel Castro at the United Nations Human Rights Council but to the European Union's delinkage of human rights from its common position on Cuba to engage with the Castro regime. This was a policy that had been in place for 20 years. 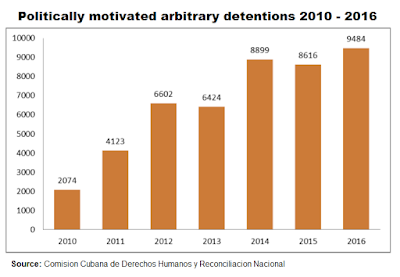 This deteriorating human rights situation, evaporating international solidarity with Cuban democrats along with the legitimization of the dictatorship is consolidating the dictatorship and prolonging its rule. Ben Rhodes claims that the "goal" of the new Cuba policy "was clear: to help the Cuban people live a better life", but the reality is that things have gotten worse on all fronts in Cuba. By this measure Obama Administration's Cuba policy is a failure.