"Our government, our people, our party, in addition to condemning any imperialist attack, will fight with Venezuelans to safeguard the Bolivarian Revolution" - North Korean Ambassador Jon Yong Jin, 10/3/13 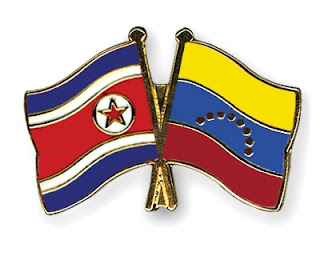 A report appeared on May 18, 2016 that North Korean Special forces and the Chinese People's Liberation Army are in Venezuela conducting military exercises with their Venezuelan counterpart. Days before the head of the opposition National Assembly of Venezuela on May 15, 2016 was complaining, over social media, of the presence of 60 Cuban officers. This included a Cuban general, who he identified by the last name Gregorich, who had a leadership role that included issuing orders to Venezuelan troops. Capitol Hill Cubans identified the Cuban General as Raul Acosta Gregorich.

Considering the promise made above by the late North Korean Ambassador these two bits of information may give Venezuelan democrats cause for alarm.

In March 2016, the same month that President Obama visited Cuba, the Castro regime signed a confidential military cooperation and intelligence-sharing agreement with North Korea reports the Paris based publication Intelligence Online. The Cuban dictatorship, under Raul Castro, has had extensive relations with the Hermit Kingdom that has included violating international sanctions to smuggle tons of weapons.

The official claim by the Maduro regime is that all this is being done to combat the threat of U.S. imperialism, but the reality appears that this has more to do with maintaining and consolidating control over Venezuela.

Observers are wondering just how involved the North Korean Praetorian Guard that Pyongyang has sent to assist Venezuelan leader Nicolas Maduro will become. Hugo Chavez’s successor has declared a state of emergency in the country while anti-government protests continue to mount. The man behind the 'loan' of North Korean troops is General Kim Yong-chol, who is close to the country’s Supreme Leader Kim Jung-un. The general is both head of the special forces and the United Front Work Department, or Tongil Chonsonbu, the intelligence service in charge of relations with friendly political movements.

North Korean special forces are training with their counterparts of Venezuela’s Grupo de Acciones Commando (GAC) and Chinese troops of the 21st Armed Group of the People’s Liberation Army (PLA) in Caracas this month.

Back in March, Pyongyang also signed a confidential military cooperation and intelligence-sharing agreement with Cuba, even though the latter is in the midst of a reconciliation process with the U.S.
Posted by John Suarez at 12:20 PM