In Solidarity with a Free Tibet. Protests around the world, including Washington, DC on Sunday.

Brave Tibetans have spent six decades resisting the occupation of Communist China over their homeland.  While at the same time showing their solidarity with other captive peoples, including Cubans and for that I will be eternally grateful and in solidarity with their freedom struggle.
60 years ago on March 10, 1959 a rebellion began in Tibet against the Chinese communist occupation of their homeland. Tens of thousands were slaughtered and that day is now recognized as Tibetan National Uprising Day. Students for a Free Tibet are organizing protests around the world, including Washington, DC on Sunday. 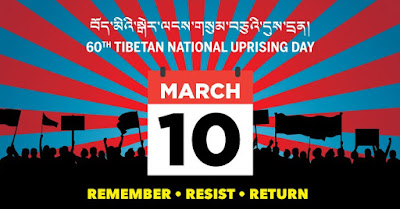