Advocating for the freedom of Dr. Cardet. 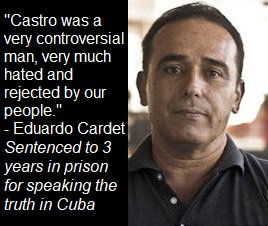 Dr. Eduardo Cardet Concepción is also the national coordinator of the Christian Liberation Movement. His predecessor, Oswaldo Payá Sardiñas, died under what appears to have been an extrajudicial killing carried out by state security on July 22, 2012 along with the movement's youth leader Harold Cepero.

The United Nations Working Group on Arbitrary Detention, a quasi-judicial panel of five experts, upheld in full a petition filed by United Nations Watch, a leading voice for Cuban dissidents, and determined that Cuba is “arbitrarily detaining” dissident Dr. Eduardo Cardet, who has been jailed by the Castro dictatorship since November 30, 2016, for criticizing Fidel Castro.