There is something wrong with a regime that requires a pyramid of corpses every few years. - George Orwell, About the "current Russian regime" (11 April 1940) 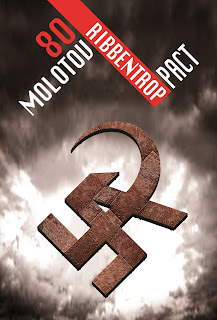 Eighty years ago on August 23, 1939 Communist Russia and Nazi Germany signed the Molotov-Ribbentrop pact. The treaty had secret protocols that divided Eastern Europe between the two regimes. The Communist International (Comintern) issued new orders to their members once the non-aggression pact had been made public. Harvey Klehr, the Andrew W. Mellon Professor of Politics and History, Emeritus, at Emory University, described the new directive.

Good communists were ordered to oppose anyone intending to stand in Hitler’s way.  With Ribbentrop’s second visit to Moscow at the end of September and the signing of a German-Soviet Treaty of Friendship, the Comintern emphasized that the primary adversary was those countries that were at war with Germany, and those socialists and social democrats fighting against fascism. Germany had concluded a pact with the USSR, while “reactionary” England, at the helm of a vast colonial empire, was the “bulwark of capitalism.” Thus, communist parties in England and France were ordered to call for the defeat of their countries—ordered, in other words, to officially embrace treason.

Nine days later on September 1, 1939 Nazi Germany invaded Poland and World War II started. Sixteen days later the Soviet Union exercising its secret agreement with the Germans invaded Poland from the East and met their Nazi allies on September 22, 1939 in a joint military parade in Brest-Litovsk to celebrate their victory.

230,000 Polish soldiers and officers and thousands of military service representatives were taken captive by the Soviets. The precursor to the KGB was the NKVD.


"From October 1939, the delegated NKVD officials from Moscow heard the prisoners, encouraged them to cooperate and collected data. Only a few of the prisoners agreed to collaborate. The commanding officers’ reports included opinions about hostile attitudes of the Poles and a minimal chance of them being useful to the USSR authorities."

The decision to shoot the prisoners was signed on March 5, 1940 by seven members of the All- Union Communist Party (Bolsheviks) authorities: Joseph Stalin, Lavrentiy Beria (proposer), Kliment Voroshilov, Vyacheslav Molotov, Anastas Mikoyan, Mikhail Kalinin and Lazar Kaganovich.  Thousands of Polish Army officers and intellectual leaders were taken into the Katyn Forest near Smolensk in the Soviet Union, shot in the back of the head or in the neck and buried in mass graves. 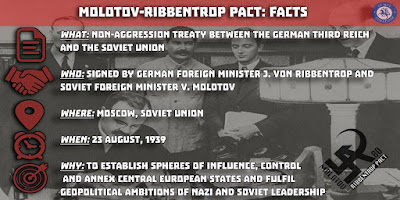 This arrangement only ended on July 22, 1941 when the Nazis double crossed their Soviet allies and launched Operation Barbarossa, the invasion of the Soviet Union. This strategy cost 22 to 28 million Russian lives in World War Two, and nearly led to the Nazi conquest and occupation of Russia.


How did these two regimes with diametrically opposed ideologies become allies? The Nazis who believe in racial hierarchies and the Communists who believe in economic equality? Vladimir Lenin's observations on class struggle in a speech to Russian communist youth on October 2, 1920 gives an insight into the communist moral vision:


"The class struggle is continuing and it is our task to subordinate all interests to that struggle. Our communist morality is also subordinated to that task. We say: morality is what serves to destroy the old exploiting society and to unite all the working people around the proletariat, which is building up a new, communist society."

Fascists believe freedom of expression and liberalism are a sham and they embrace violence as a positive force to achieve national unity. However at the same time their ideological nemesis, the communists, also reject the same existing system and embrace violence as a means to achieve their end. Both have agreed on the need to destroy the existing democratic order, and with their "moral" world view have not discounted working with each other to achieve that end.

The destruction of the Weimar Republic in Germany was a joint exercise by the Communists and the Nazis. Antifa came into existence during these years, and was controlled by the German Communist Party (KPD). Rob Sewell in his 1988 book Germany: From Revolution to Counter-Revolution, Fortress Books described how the German communists allied electorally with the Nazis:


"In August 1931, to capitalise on their growing popularity, the Nazi Party launched a referendum to overthrow the Social Democratic government of Prussia. At first the KPD correctly attacked it. Then, three weeks before the vote, under orders from Stalin's Comintern, they joined forces with the fascists to bring down the main enemy, the Social Democrats. They changed the name of the plebiscite to a 'Red Referendum' and referred to the fascists and the members of the SA as 'working people's comrades'!"

Professor Klehr described how the communists had viewed the Nazis as a means to undermine capitalist democracies and achieve power . Antifa identified all political parties that were not communist as fascist. This meant that social democrats, centrist, and conservative political parties were  all lumped together with the Nazis and labeled fascist.  The Comintern's class against class approach fractured any potential broad anti-Nazi coalition.

"Adolf Hitler’s rise to power in 1932 had been immeasurably aided by the German communists' steadfast support for the Comintern tactic of “class against class,” which demanded no cooperation with other anti-Nazi forces. German communists blithely insisted that Hitler’s triumph would be evanescent—summarized in their optimistic slogan, Nach Hitler, kommen wir ('After Hitler, us').

This is why you see a communist like "The Communist Vulture" in 2019 declare that "nonviolence is an endorsement of white supremacy." Polarizing the political culture, tearing down democratic institutions and changing the system by any means is the objective. Both are seeking revolution and using whatever means to achieve it, except nonviolence. This is because their ideology is founded on violent struggle. The communist believes in class struggle therefore non-violence is anathema to them. Same holds true for Nazis, who view violent struggle through a racial prism. 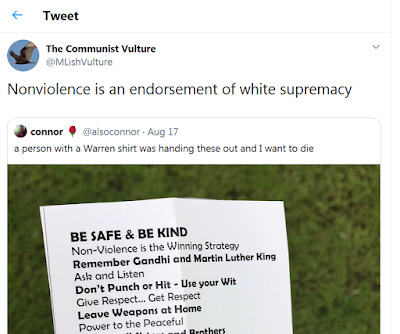 The rejection of nonviolence is not new. The Soviet press published an article written by S.M. Vakar in 1948 following Mohandas Gandhi's assassination titled "The Class Nature of the Gandhi Doctrine" in the Soviet philosophy journal Voprosy filosofii (Questions of Philosophy). The Marxist Leninists repudiate Gandhi because of his "reformist methods of struggle" and principled rejection of class struggle. According to them the nonviolence "doctrine still retards the development of class awareness among the Indian masses." The Soviet KGB went further in their active measures against Martin Luther King Jr. in the United States.
Meanwhile the Soviet Union following the end of World War II was funding Neo-Nazi parties in West Germany in an effort to undermine their democracy. They backed the Socialist Reich Party in 1950 that worked with the Communist Party of Germany.  Campaign themes of the Socialist Reich Party included that the Holocaust was an allied propaganda invention, it accused the United States of building fake gas chambers and producing fake news-film footage about concentration camps, that the politics of the Allied-powers created West German state were merely a front for American domination, and that West Germany's puppet status of the United States should be opposed.

In the early 1960s the Nazi who saved Adolf Hitler's Third Reich in 1944, Otto-Ernst Remer, had contacts with and assisted Fidel Castro in Cuba with the purchase of weapons. Ernst-Remer along with Ernst Wilhelm Springer sold the Cuban dictator 4,000 pistols. The German foreign intelligence agency, Bundesnachrichtendienst (BND), reported that "evidently, the Cuban revolutionary army did not fear contagion from personal links to Nazism, so long as it served its objectives."

The myth that the communists are anti-fascists is a dangerous one. The fact is that they view the Nazis as a tool to polarize society, accelerate the development of class consciousness, destroy Western Democracies and replace them with communist regimes.